At one point in history, The Ultimate Warrior on equal footing with Hulk Hogan in terms of popularity. However, a combination of things prevented Warrior from having a long storybook career like the Hulkster. Rather, Warrior’s story is probably one that we can more relate to as a man who triumphed, failed, and sought redemption throughout his life. In its newest documentary, Ultimate Warrior: Always Believe, WWE takes us through the life of someone who lived as a superhero, but was still human. 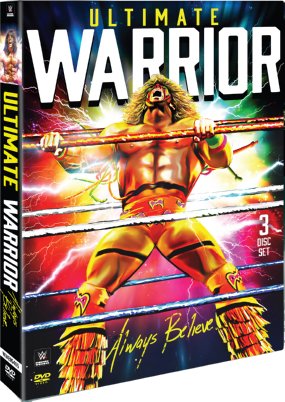 Here’s my take on what’s on the release:

The DVD itself goes back and forth between Warrior’s entire wrestling career and his time during his final WrestleMania Weekend in 2014. Interviews include some obvious choices like John Cena, Triple H and Hulk Hogan, but some great “surprise” people include Warrior’s first tag team partner, Sting, Linda McMahon, and the rest of the Warrior clan (wife Dana and his two girls). It’s the latter interviews that help bring perspective on Warrior’s career and makes someone who spent his career as a cartoon character seem more human.

The sudden death of Warrior just two days after being inducted into the WWE Hall of Fame certainly made his life all the more unusual. Be warned, there are several times throughout the documentary that you’ll feel like crying as most of the interviewees have trouble holding back their tears during their stories.

To the DVD’s credit, there isn’t a single issue left of the discussion. From the highs of Warrior’s title wins to the lows of his steroid use and professionalism to the downright ugly releasing of 2005’s The Self Destruction of the Ultimate Warrior DVD, everything is at least given a few moments. While WWE does gloss over exactly why it released the DVD, it would have been nice to hear more. Still, WWE didn’t completely sweep it under the rug and did admit that it caused significant damage to Warrior and his family.

WWE certainly went deep into the well as both matches and interviews span from WWE, WCW and even include WCCW, Superstars and Wrestling Challenge events. It should be noted that none of Warrior’s ‘Mania matches are on either of the two bonus disks. As weird as it sounds, it’s actually nice because this allows you to see some hidden matches that are interesting and of course listening to the nonsensical interviews was always something I enjoyed growing up.

It’s safe to say that unless you are a die-hard Warrior fan, the DVD probably isn’t for you. Still, if you grew up a fan of the Ultimate Warrior, it’s certainly worth a look.