Shooters, Heels & Heroes: The Life & Times of Rico Valentino is the best true crime book I’ve ever read about a professional wrestler that I’ve never heard of.

And if that’s not a set-up to want to read more, I don’t know what is. 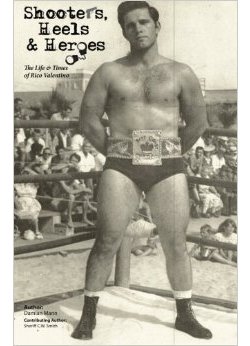 I can tell you what it is not, and that is a typical wrestling biography. Professional wrestling is merely the backdrop to telling the story of Rico Valentino or Rico Renaldo or Beatnick Rick.

Since I was not familiar with the name, you probably aren’t either. It turns out that most of Valentino’s work happened in smaller locations, like Idaho and Nebraska, with trips to California, Portland, and other parts of the Western United States. There are no preposterous claims to having been world champ or turning down Vince McMahon and the WWF, which is actually refreshing for a lesser-known name.

While what little wrestling there is seems authentic enough, how do I address the legitimacy of the cops and robbers aspect? Certainly the family turmoil, tested by the rigors of the road for a wrestler, ring particularly true.

The narrative, written by author Damian Mann, and cased over by “contributing author” Sheriff C.W. Smith, is at times harrowing and terrifying — and always compelling.

It don’t want to dwell on the idea, but this is more of a true crime book, where Valentino is an undercover agent for the FBI, cracking down on crazed rednecks and racists. The tales of infiltrating and befriending the troublemakers makes for a great read, and there are times that it is hard to believe that it is a work of non-fiction.

But indeed, Valentino sat down with Mann and shared his life story, coordinated and mediated by Smith, the friendly arm of the law.A veteran of two decades in the newspaper business in California and Oregon, the award-winning Mann has a way with words, describing one right-winger who detested how America had become “a country overrun by foreigners and foreign ideas. He vomited his distaste for any minority that crossed his mind as he recited all sorts of venomous crap from the Nazi playbook.”

Blessed with great recall, Valentino has provided Mann with all kinds of rich, believable tales, great dialogue, and characters that Hollywood could hardly have drawn up. He also is a master of pacing, moving the story along and pulling back at the right times.

In fact, it’s so well-written that I question the self-publishing aspect of the book. How could have an established publisher not have bought into the quality of the writing? I recognize that Valentino is hardly a mainstream name, but still. Given the nature of wrestling personae, perhaps Valentino’s ability to manipulate the “real” world of criminals and troublemakers behind-the-scenes is not that hard to imagine.

“It was just another role to play in a career filled with roles,” writes Mann on Valentino. “Hero or heel, it was all the same to him, and he could change sides if the money was right. His moral compass spun wildly at times.”

Shooters, Heels & Heroes is certainly not a book for everyone. It’s violent, profane, and reveals a horrible underbelly of society full of hatred for fellow human beings.

There is no denying, though, that remains a well-crafted, entertaining tale even while digging through the muck of society — professional wrestling included.