HAMILTON — The WWE brought its show to Hamilton, Ontario, and the crowd was not disappointed. The cavernous First Ontario Centre was only half filled, but the reactions from the fans would have made you think that the arena had patrons hanging from the rafters.

Two of those enthusiastic fans were Mike Armstrong and his five-year-old son Braxton. This was Braxton’s first WWE event and he was wide-eyed with excitement. His father Mike enthusiastically recalled his first love affair with wrestling when he was five years old as well. “In 1986, I was five and I really liked the characters in wrestling,” said the elder Armstrong. “The characters were so over the top and really cool. When I saw Jake ‘The Snake’ Roberts what was there not to like? The guy had a snake!” 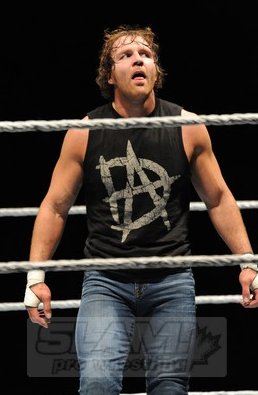 Dean Ambrose in the main event on Saturday night in Hamilton. Photos by Mike Mastrandrea

When asked who his favourite wrestlers were, Braxton quickly replied that he enjoyed watching Kofi Kingston and R-Truth. “I really like the boom drop and the music,” said Braxton. The young fan would not be disappointed as Kofi and his New Day mates defended the tag team titles later that night.

The crowd was excited and very loud from the start. “Bad News” Barrett kicked off the show showered with boos. He grabbed the microphone and told the crowd that it is such a wonderful day for the British Commonwealth as a new member of the Royal Family had been born. The Canadian crowd politely clapped for the announcement. Then in true Barrett fashion he reminded the people that he is the King of the Ring and the fans should bow down to him.

Soon enough his opponent, Neville, came to the ring and a quick-paced and hard-hitting match ensued. The crowd was solidly behind Neville and cheered wildly when he hit Barrett with a 360 shooting star press for the win.

In other matches, Damien Sandow planted Bo Dallas with a DDT for the pin. Erick Rowan came up short against the fast paced offense of NXT standout Sami Zayn.

Rusev and Ryback had the fans rocking with their power moves. Lana played up to the crowd and basked in their adulation. Soon enough, Rusev sent Lana to the dressing room to the great displeasure of the crowd. Ryback won the match with a fall away slam.

While all of the matches were interesting, fun and very entertaining the match between Charlotte and Naomi gave a preview of what the Divas division might become. Charlotte looked like a natural in the ring. Her stance, the way she held her hands, and her motion, was reminiscent of her father, Ric Flair. Charlotte has a lot of charisma and is very strong. Her inexperience was noticeable as she seemed to pause between moves to contemplate her next wave of attack. Once she made up her mind to do something in the ring, she was fun to watch. 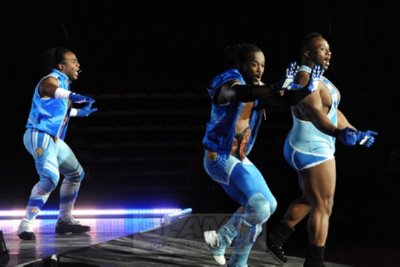 The New Day dance their way to the ring.

The New Day, of Xavier Woods and Kofi Kingston, defended the tag team titles against Tyson Kidd and Cesaro. Apparently the three man troop, of Big E, Woods and Kingston, have the Freebird rule in effect and can choose any two members of the trio to defend the titles. Kidd and Cesaro’s attack was very funny and they timed their punches and kicks to the chant “New Day sucks!” Cesaro and Kidd won the match by disqualification.

In the main event Luke Harper tangled with Dean Ambrose in a hardcore match. The fans became unglued with everything that Ambrose did in the ring. With run-ins from a majority of the wrestlers on the card the fans were even more excited to see rivalries continue at the end of the card. Ambrose won the hard-fighting match after he planted Harper through a table for the pin.

This night of wrestling was very enjoyable because the matches were all good. The wrestlers worked hard and let their personalities come forth. The crowd was hot and reacted to everything the wrestlers did. This crowd was young and filled with kids who were the prefect fans, cheering the good guys and booing the bad guys. From the looks on Mike and Braxton’s faces they were happy with their first father and son outing to the wrestling matches. The WWE is in good shape for the future with young fans who love their wrestling.