In its first few months, independent promotion Destiny World Wrestling has impressed many fans in the Toronto area with its family-friendly, high quality shows. While some of the buzz for the company has been because of the big names it has brought in for its shows, one of its homegrown stars — Randy Reign — has been making a name for himself as well. And he’s hoping that local success will one day lead a destiny in WWE.

“Going to WWE is the dream,” he told SLAM! Wrestling. “I want to be able to say, whether it’s for two years or five or any length of time, that I was there.”

It’s a dream that the 26-year-old Randy Arruda has had since his childhood, when he would watch WWE all the time with his grandfather. 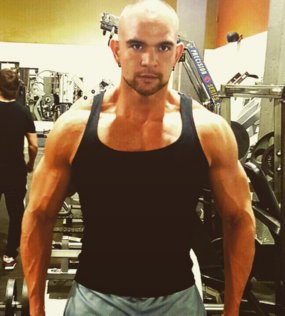 “One of the first memories I have from back then is watching an angle between the Ultimate Warrior and Papa Shango back in 1992 when I was four years old. My grandfather thought it was real back then, so he would go nuts, thinking that these guys were really tearing each other apart. When he found out it was fake, he boycotted the sport.”

Perhaps hoping Arruda would one day become a “real” fighter, his grandfather signed him up for taekwondo lessons when Randy was eight years old.

“I got my black belt eight years later. Other than that, I wasn’t really any good at sports. When I was a kid, I was a chunky little guy. In high school, I played soccer in high school because I’m of Portuguese background and that’s what they mainly watch, but it was just as an activity.”

It wasn’t until he turned 17 that Arruda started growing in size and stature into the person that would one day be towering over his opponents.

“I had a big growth spurt between the ages of 17 and 20 where I grew really quick — four to five inches. Then I kept growing until I was about 23. I’m 6-foot-6 now, and I think I’ve stopped growing — I hope so, because I’m happy with where I am.”

With his new-found size, and a lifelong love for pro wrestling, Arruda decided to pursue his dream and started making some inquiries.

“I would go to indy shows in Toronto where they would bring in these legends,” he said. “I used to introduce myself to them afterwards and tell them that I wanted to be a wrestler one day and ask them for advice. In 2008 or 2009, I was talking to Ted DiBiase Jr. and he recommended I go to Harley Race’s school. Eight months later, I was down there.”

“At Harley’s,” he explained, “you learn classic pro wrestling. You’re learning every little detail it takes to know how to put a match together, the psychology, the technique. It was incredible. His school is in a really small town outside of St. Louis — maybe about 500 people there. It’s brilliant, because there are no distractions, so you have nothing to do there but train your ass off.”

During a break from his training, Arruda came back to Toronto to apply for a permanent U.S. visa, when he met Anthony Carelli, better known as WWE’s Santino Marella. Carella told him that he would be opening up his Battle Arts Academy, and so Arruda made the decision to stay up here to continue his training.

A short time later, in January 2014, he had his first match.

“I was so nervous leading into it,” he recalled. “But then I came through the curtain and I could feel that I was in the right place doing what I need to do, and that’s entertain people.”

Since then, Reign’s stock has risen to the point where he teamed with WWE Hall of Famer Kevin Nash in the main event of the last Destiny show.

“That was surreal,” he said about the experience. “I watched him on TV when I was five, six years old. The next thing I know, I’m tagging his hand to come into the ring. Once in a while I’ll think, ‘Did that really happen?'” 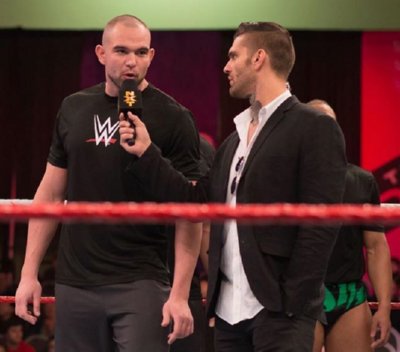 Randy Reign at his NXT tryout.

Another mind-blowing experience was Arruda being invited to participate at a WWE NXT tryout earlier this year at the Arnold Sports Festival.

“It was really unique,” he said, “because that was WWE’s first live tryout in front of an audience. They rented out their own space, put in a ring and made an arena like it was a mini-NXT arena.”

“It wasn’t like a tryout like they have in Orlando which is a full three day, eight hours a day training session. This was a two-day tryout, about 60 to 90 minutes a day. There were 16 of us in the ring trying out in front of about 5,000 to 8,000 people,” he described. “It was about as basic as can be — they had us do our warm-up exercises, then do some rolls in the ring, then run the ropes for a bit.”

Though he never received a developmental contract out of the experience, Arruda has remained in contact with the company, and will be heading to Orlando for another tryout in the fall.

“From now until then, I’m just going to keep training and getting ready for that. I’m going to get some more experience, learn how to do better promos, and keep having matches.”

That includes a match this Sunday against current Border City Wrestling champion Jon Bolen. It will be a bit of a different challenge for Reign, as Bolen is one of the few opponents against which Reign’s size may not be an advantage.

“It will be a new experience,” he confirmed, “because a lot of times, I’m the bigger guy in the ring. I’m taller than Bolen, but he’s so physically big and muscled up that I’m pretty sure I’m going to be taking some big hits. I’m pretty excited for it.

Win or lose, Arruda is glad to have the opportunity in the ring to take on any opponent, and looks forward to continuing his in-ring career.”

WHAT’S IN A NAME?

The most frequent question Randy Reign gets is about his name, and people speculating as to whether he chose that as a tribute to — or, more cynically, to capitalize on the popularity of — top WWE superstars Randy Orton and Roman Reigns?

“I hear that a lot,” he acknowledged, “so sometimes it’s like, ‘Gosh, I wish I had a different name’. I actually came up with the name about five years ago.”

“My real name is Randy. And I always wanted a name that had the initials R.R., because I think it sounds cool, and you can also do some cool design for it with the two R’s back to back. One day it just came to me, Randy Reign. I told my friends and they thought it was amazing, and that’s it.”

“But there’s always time for change. And if I get to WWE,” he smiled, “they’ll probably going to change my name regardless.”

Bob Kapur is still waiting for his growth spurt. E-mail him your measurements at [email protected].