If you’re hoping to see WWE Hall of Famer Mick Foley this Saturday at the Sport Card & Memorabilia Expo, taking place at the International Centre in Mississauga, Ontario, rest assured that he’s taking all possible measures to be there. At the very least, he’s going to remember to bring his passport this time.

“The last time I came to Canada,” he told SLAM! Wrestling, “I didn’t have my passport with me. I only got into the country by answering a bunch of questions, and then by showing the border agent my lack of an ear.” 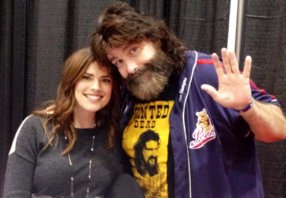 That story, and the hearty laughter with which he tells it, speaks volumes about Foley’s sense of humour — something that WWE fans got to see earlier this week when his Cheap Pops stand-up special aired on the WWE Network.

“I’d been hoping (for them to air one of the shows) even before the network was on the air,” he said, “because I realized that it would be the perfect home for my show. I got in touch with Mr. McMahon last summer, and told him I had a show in the Los Angeles area, and that I thought it would make a good addition to the Network lineup, and got the wheels turning.”

And as for his thoughts about seeing all his efforts come to fruition?

“I was really thrilled,” he said happily. “I could not have asked for a more positive experience.”

“It kind of answered the question I’ve heard over and over and over, which is, ‘What does he do?’ It was really nice that people around the country, and around the world got to collectively say (surprised gasp), ‘He tells wrestling stories!’ I’m really happy that people got to see what the show is, and that they know it’s not like the old ECW show where they get to throw chairs on stage at me,” he laughed. “I think it’s safe to say that we far exceeded peoples’ expectations.”

Which is testament to how hard Foley has worked on the show. In the beginning, he recalled, they weren’t all necessarily as polished as the one that aired on the Network.

“There were times at the beginning where (being on stage) was the loneliest place in the world,” he remembered. “Where if I could have dug a hole and disappeared from the stage, I gladly would have done it. It’s almost indescribably painful to tank on stage and know that there’s no big move to go to like there is in wrestling. There’s no run-in, there’s no referee stopping the match. It can be a really devastating experience. But I’m happy to say that I think I got all those out of the way several years back.”

Indeed, with the growing pains out of the way, Foley now only looks at how to build on the show and make it different every time. He’s hoping that he’ll be able to show that to his Canadian fans over the coming months.

“I do plan on coming back to Canada, and those will be entirely new shows,” he confirmed. “I have Ottawa booked in October, and I’ll be hitting plenty of other cities as well. I had such a good time doing the Calgary Comic Expo, that I’m hoping to be part of the one in Edmonton and possibly the one in Saskatoon.”

His immediate Canadian visit, though, will be this Saturday, where he will be meeting fans for autographs and photo ops between approximately 12 p.m. and 3 p.m. Foley will be the only wrestler there this weekend, but shrugged off any concern that people who are there to see the various baseball and hockey players will eschew a “sports entertainer,” no matter how legendary the name.

“A lot of guys will come to see the other athletes,” he said with a knowing wink, “and then they’ll just kind of very quietly make a turn towards my table.”

“It’s always flattering when people come up to me,” he added. “It’s always interesting to meet people and find out how something you did may have not only added to their enjoyment, but may have somehow inspired them.”