LAS VEGAS — The thing that really stands out when interviewing Jushin Thunder Liger, unmasked, is his cauliflowered ear. There is little doubt he’s a wrestler, especially when he talks with pride about how his ear was damaged all those years ago.

In general, Liger — Keiichi Yamada — is an animated interview. His arms are in some ways more descriptive than his broken English, and when he starts to bounce up and down in excitement, it’s pretty evident that you have hit a gusher, a subject that he doesn’t get to talk about much. 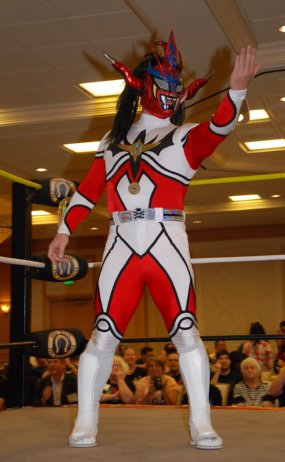 Jushin Liger before his match at the Cauliflower Alley Club reunion on Monday, April 13, 2015. Photo by Brad McFarlin

In this case, it’s the bent, twisted cartilage that makes up a cauliflowered ear. Naturally, it’s usually hidden behind his elaborate mask — but it has been there for all of his 32-year career.

When asked about his amateur background, he just said he was “so-so.” Yet, competiting at 75 kilograms, he finished second in the national championship to future pro Toshiaki Kawada.

The modesty of the legendary Liger is just one of the tidbits garnered during the interview.

Setting the scene, it was the afternoon of the last day of the Cauliflower Alley Club reunion in Las Vegas, and Liger is in a booth in the TGI Fridays at the Gold Coast Hotel & Casino. An informal meeting of the National Wrestling Alliance had just ended — with lots of praise for New Japan Pro Wrestling and its association with the resurgent storied brand — and Liger is speaking with SLAM! Wrestling’s Greg Oliver and Dan Murphy of Pro Wrestling Illustrated.

Liger, though only 5-foot-7, is solidly-built with a thick neck, small nose on a flat face, and definite receding hairline evident through his close-cropped hair. He is comfortable in a T-shirt, but not so comfortable with his English. The conversation stops and starts numerous times as he struggles to grasp our questions, and we attempt to rephrase. Then Murphy has a brainstorm, and begins to use Google translate on his phone to ask the questions. All of a sudden, it’s like a wall comes down, and Liger lightens up, and starts to give longer answers — not a lot longer — but a bit.

A foreboding chasm of a language barrier is overcome, bridged, and two reporters get excited, but perhaps not as excited as Liger. Then when Murphy figures out how to get the kanji symbols up rather than translated text, Liger responds with a happy “ooooh!”

The back-and-forth is more stop-and-start, but revealing nonetheless.

We talked about his training in the New Japan dojo, where he was initially turned down for being too small. He figures he trained for about a year and a half before stepping into the ring to perform.

Naoki Sano, referred to as one of his all-time greatest opponents, was around at that time too, and their time together in the dojo was a boon to their matches, confirmed Liger. Ditto was his respect for Chris Benoit, who put in the work: “He stay in Japan, he stay in dojo, the gym” and just like the Japanese boys, he was “cooking, cleaning, training, when he began.”

It’s about more than just the training, though, and he mentioned “good food, training and never alcohol, beer or something.”

One of his first stops was Calgary’s Stampede Wrestling. Yamada had been working in the United Kingdom, and then was off to Canada.

“I in England, then I go to Calgary. There, first match, Stampede Wrestling, Cuban Assassin,” he recalled, getting excited to hear names like Gerry Morrow and Kerry Brown (I say “funny guy” and Liger gives a BIG laugh), and Tokyo Joe (“Mr. Diago. Him teacher … Canada dojo”). He said he never did go to the famed Hart House “Mr. Hito, his house I stay. No go to Stu Hart house. Big house, ring, wrestling.” 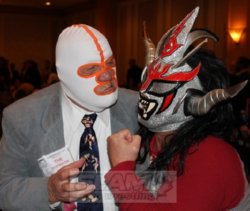 In Japan, he was blessed with the Jushin Liger costume, based on a Japanese anime.

The NWA and New Japan have a mutually beneficial relationship at the moment, and Yamada definitely is a fun. “More and more places, up, up, up,” he said, recalling names he loved from the 1970s. “Long time ago, I watch TV, Harley Race, Mr. Harley Race, Japan. Jack Brisco. Japanese wrestler guy Giant Baba. Hero, my hero. Big territories, NWA. Japanese people say, ‘NWA Number One.'”

As for a gaijin hero, Liger is definitive in his choice: “My hero is Terry Funk. Yes. He’s good.” (And after the interview concluded, Liger left the restaurant only to run into Funk and his wife Vicki just arriving; he might as well have been in a candy store, he was so excited.) 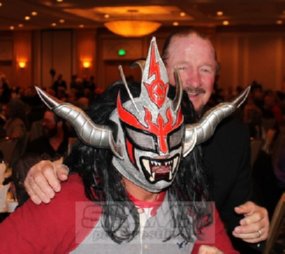 After more than three decades in the ring, Jushin Thunder Liger has been fortunate with injuries, surprising given his high-flying style (which is naturally less today). One time he broke a leg — “baseball slide.” He mentioned “brain” as one of the issues, but his brain tumor surgery was almost two decades ago now, in August 1996.

Liger, who just lost the NWA World Junior Heavyweight Championship in Las Vegas during the CAC, to Steve Anthony, has not given much thought to retirement.

Greg Oliver would like to dedicate this interview to his late friend, Shuhei Aoki, who has been there in the past as his translator, including talks with the likes of Go Shiozaki. You are missed, Shuhei; the CAC wasn’t the same without you.