One night in his youth, Jody Simon, the teenage son of The Great Malenko, stood in the balcony of the Fort Homer Hesterly Armory in Tampa, Fla., with two British wrestlers who just finished “putting on a clinic of how wrestling should be.” 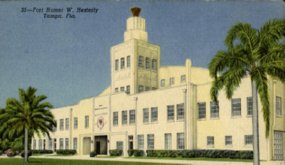 The three looked on as The Great Malenko waged war, popping his opponent with the signature “two-fingers-to-the-eyes.” Roars echoed throughout the building. One of the grapplers, Tony Charles, did a double take.

“My dad just did the two fingers in the eye thing. Seeing Tony trying to process it… I’ll never forget that because (the armory) was that special of a place… because (my dad) was so over back in the day that he could do little things like that and cause the place to explode,” Simon said.

And though the atmosphere that transfixed generations of wrestling fans has faded away and the building remained vacant, Simon is working to keep those memories alive for future generations. In 2013, Tampa’s Jewish Community Center entered into a 99-year lease for the building to house a second community center, which will include a commemorative wall solely for the armory’s wrestling history.

But there is more to the armory’s history than bodyslams and backdrops, according to Jack Ross, executive director of the Jewish Community Center in Tampa. The building is listed on local, state and federal historic registries — From being commissioned under Franklin D. Roosevelt and opening the day after Pearl Harbor as a National Guard Armory, to hosting Elvis Presley, Martin Luther King Jr. and President John F. Kennedy.

Still, Ross said while giving hard-hat tours and building walk-throughs — and even before acquiring the property — people would approach him with stories of the armory’s wrestling days.

“So many people have cited their memories, their fondest memories of attending wrestling at the armory,” Ross said. “So I was already aware of the responsive chord that wrestling struck with people, that memory. And we have always intended to pay homage to the armory’s history as a whole.”

The majority of the wrestling display, according to Simon, will contain photos depicting “the key guys in their eras and the people who really brought the most to this town.” Memorabilia, posters, programs and a mural could be included as well.

Ross said the armory was chosen for the JCC’s expansion to “expand back to where our roots” are. The “largest concentration” of the Jewish community lives in South Tampa, and the current JCC is located in North Tampa, roughly 20 minutes away. To keep the significance of the building alive, commemorative walls, in addition to the wrestling wall, will display the building’s history. Ross said he called Simon in January to discuss the sport’s inclusion in the revamped structure, when Simon suggested a wall devoted entirely to wrestling.

Ross contacted Simon because of The Great Malenko’s career in the Tampa area and his Jewish heritage.

“Florida was a real hotbed for (my father),” Simon said. “That being said, he was also Jewish. One of the only Jewish professional wrestlers to come through this place.”

Florida was a “phenomenal territory in its own right,” according to Simon, but when the matches at the armory sold out, he said “sometimes there’d be a couple thousand people outside just listening.”

“Tampa was the hub of that territory, and there was something about that building. The building had its own pulse,” Simon said.

The JCC created a GoFundMe campaign to raise funds for the wrestling wall, which, as of April 21, has garnered $8,805 in contributions from the likes of Simon and fellow wrestlers Mark Mero, Norman Smiley and Bob Cook.

But for Simon, preserving wrestling’s history in the armory is about more than “just the boys.”

“It’s the community that revolved around them and their interaction with that community… It was a signature place in a time where these guys were looked at as bigger than life local heroes,” Simon said.

Fans of the time — from mayors and judges to “people who are the underbelly of this city” — “literally suspended reality” when they stepped into the armory, according to Simon.

“They would go in knowing this was choreography, but for that time they were in there they forgot it… People had the chance to just let everything go out and believe,” Simon said.

Cook, who donated $100 to the efforts, said the armory is the “holy grail” for Florida wrestling, where wrestling notables Dory Funk Jr. and Dusty Rhodes won championships and “experienced that aura.”

“All the greats went through that building,” Cook said.

While he never wrestled in the armory, Cook attended events as a child. One of his best memories was looking forward to seeing Mexico’s Mil Mascaras in action, which happened the same night that Rhodes unexpectedly appeared during the main event bout between Funk and Charlie Cook. Bob Cook said Rhodes and Funk “brawled all over the arena.”

“The people were going completely insane… (It was the) classic wrestling where you just loved it, the violence,” said Bob Cook, who decided he wanted to be a wrestler at the age of 12.

But it wasn’t until 1981, when he walked out of the armory to find a flyer for The Great Malenko’s wrestling school on his car, that his dream began turning into reality.

“I loved everything about it, the wacky characters, the violence… (I just) didn’t know how I was going to do it,” Bob Cook said. “I just got lucky coming out of that armory that day.” 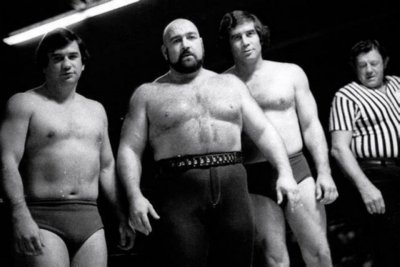 Among the names that worked in Tampa at the armory are, from left, Jerry Brisco, Jos Leduc and Jack Brisco.

Brian Blair, president/CEO of the Cauliflower Alley Club, said the armory is “the iconic building for Championship Wrestling from Florida,” where he seldom saw the building not sell out.

“It’s a building with more meaning than any other building in Florida when it comes to professional wrestling,” said Blair, who attended matches in his youth before lacing up the boots himself.

The wrestling wall will preserve a dynasty of “the number one drawing entity in that building,” according to Blair.

“The energy that the people created was like no other place… (The fans) were into it. They were captivated. You had these people just eating out of your hand,” said Blair, a former Hillsborough County (Fla.) commissioner who saw “several proposals” for the building before the JCC acquired it.

Ross said the JCC has “set out” to attain relevancy with “the broadest spectrum of Tampa” with its revitalization of the armory, which will include a premiere event center, a state-of-the-art athletic center and a fine arts center. In reviving the property, Ross said the JCC wants the building to be relevant, dynamic and allow “people to feel a sense of ownership.”

Simon, who spent his childhood in the balcony of the armory with the likes of Andre the Giant, Lou Thesz and Karl Gotch as he watched his father “ply his craft,” can relate to that ownership appeal.

“It was everybody and anybody in town coming together. The haves to the have-nots in one place on a Tuesday night… (The armory) was, for me especially, a magical place,” Simon said. “I’ve walked in there with people who’ve got goosebumps.”

For more information, or to donate to the GoFundMe campaign, visit gofundme.com/wrestlingtampa. A separate fundraising event, featuring stars of the past and present, is being planned for June, though Simon said details have yet to be finalized.

Kari Williams is a Midwest-based journalist. She can be reached at [email protected], and you can follow her on Twitter @Kari_Williams.