Thank you from a Fallen Angel

LAS VEGAS – The speech by “The Fallen Angel” Christopher Daniels last Tuesday, April 15, at the Cauliflower Alley Club reunion, after receiving his Men’s Wrestling Award, is an excellent example of both honouring the past and the stars of today. And, given that it’s Daniels, there’s a touch of Kazarian too.

The event was the Baloney Blowout at the Gold Coast Hotel & Casino, and Daniels was the first award recipient of the night.

His longtime tag team partner Frankie Kazarian introduced him to the audience of about 600, consisting of stars of yesterday and today, names big and small.

Kazarian began by thanking the crowd — “everything you guys did to pave the way so a guy like me can fall down for a living in this great business.”

He then started in on Daniels … in a round-about way.

“I couldn’t really call myself a pro wrestler if I didn’t come up here and not first put myself over, so that’s what I’m going to do,” said Kazarian. “In 2005, I was blessed and honoured to receive the Future Legend Award. That time was particularly special for me because in attendance that night was my trainer, my friend, my mentor, the late, great Walter ‘Killer’ Kowalski. And also Jesse Hernandez, who’s been very, very important in my career. Now, 10 years later, I don’t know if I’m quite a legend, so Cauliflower Alley, if you want the plaque back, my feelings won’t be hurt.

“This isn’t about me, unfortunately. I’m going to talk about Christopher Daniels, my friend who I met in 1998 at Jesse Hernandez’s pro wrestling school in Southern California. When I met Chris, he was already a big deal on the Southern California independent scene. I knew this, because he told me. We quickly became pals. As the years rolled along, we found ourselves booked on the same shows in California and everywhere. We started in company called TNA around the same time and spent a good 10, 11 years there. During that time, I hung around with Chris, and two other guys, A.J. Styles and Samoa Joe, and formed a pretty good brotherhood, so much so that stood up with me at my wedding, which was the happiest day of my life — and I’m not saying that because my wife hits harder than I do.”

“In short, it’s been really a privilege to watch Chris’ career from afar and up close — sometimes too close. To me, a great wrestler is somebody you can be in the ring with and become a better performer just from having been in the ring with them. It’s somebody that you can put anybody from the roster in the ring with, and regardless of height, weight, age, experience, and that person can work with them. Christopher Daniels absolutely fits that bill. So I wanted to present the 2015 Men’s Wrestling Award to my friend, the second-best looking member of the current Ring of Honor tag team champions, Christopher Daniels!”

The crowd stood for Daniels, and he was touched. 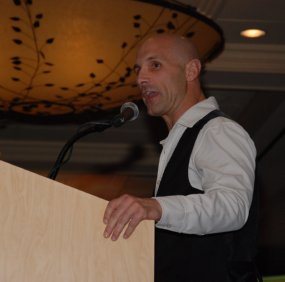 Christopher Daniels at the podium delivering his speech. Photos by Brad McFarlin

“There are much more deserving people still to come, so save your standing ovations. Please bear with me, I was going to rap my speech, but Oscar [of Men on a Mission] beat me to it, which shows why we need agents for the Baloney Blowout. I don’t remember a time when I wasn’t watching professional wrestling, when I wasn’t a fan. So if you were someone I only watched once, or you were someone who’s name I read in Pro Wrestling Illustrated or Inside Wrestling, or if I watched you every week on TBS or ESPN or any of the myriad of television shows that I watched as a kid Saturday mornings and Sunday evenings, I thank you for paving the way for me. But the one person I have to thank more than anyone else is Sean Waltman. Sean Waltman is the man who changed the idea of becoming a pro wrestler from a pipe dream, a pie-in-the-sky, to a possibility. His experience in the ring made it seem like this was something that was within my grasp. If every person who was inspired by Sean came up here and said five seconds of thank you, we’d be here for years and years. I hope Sean knows how much he changed professional wrestling for people like me to be able to come and do what I do for a living, so thank you Sean.

“Sam DeCero, Mike Gretchner, Kevin Quinn and Brett Sanders, the people who I trained with, that I trained side-by-side, without the people that trained me, I wouldn’t be here if it wasn’t for them. Mike Moran, one of the original Texas Hangmen, was the first person who took me under his wing and told me why to do things rather than how to do things, and for that, I’m forever grateful.

“It wasn’t until 1996 that I went to California, and when I did, I didn’t know there was any wrestling out on the West Coast. I thought I’d have to give up my dream just three years in. If it wasn’t for Bill Anderson and Jesse Hernandez opening the doors of the School of Hard Knocks to me, I don’t know what I would have done, so thank you guys for allowing me to be a part of your school.

“To the people who helped me, like Victor Quinones, who made it possible for me to wrestle Taka Michinoku for the very first time, which got me over in Japan, to Jim Cornette, who helped me in many ways in the WWE. He helped me get into Dory Funk Jr.’s Funkin’ Dojo, which got me on the East Coast and used by promoters like Jim Kettner in the ECWA, which started a long career for me on the independent scene. Roland Alexander, who helped me on the West Coast in APW, I wouldn’t be where I am today if it wasn’t for the opportunity that those people gave me.

“As a professional wrestler, if you get an opportunity to be a part of a locker room for a long period of time, it’s a blessing. I had the good fortune of being a part of two locker rooms as they opened and grew, both TNA and Ring of Honor. Thank you Jeff Jarrett and Dixie Carter for the opportunities that you gave me in TNA, and thank you Gabe Sapolsky, Adam Pearce, Hunter Johnston and Kevin Kelly in Ring of Honor. 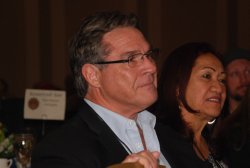 “Thank you Terry Taylor. Terry Taylor, I think I probably took years off your life, bothering you with all the questions I had, all the times that you gave me something that I questioned, because I wanted to know why so that I didn’t have to ask again. I’m sorry if I made your hair grey or made you pull your hair out or frustrate you to an end point. Thank you so much for every moment that you ever gave me of your time. I’m indebted to you forever.

“Kevin Sullivan was the first guy to give me a job at WCW, thank you very much. Bob Ryder and Jeremy Borash, who got me my second job in WCW, which many of you may not even know about because it was so short. They don’t even call it a cup of coffee when it’s that short, it’s a shot of espresso.

“Then, more than anything, because this business is what it is, you depend so much on the person across the ring from you, so I’d like to thank some people that I had the opportunity to be in the ring with more than once. Mike Modest, who was a gentleman that I had the opportunity to wrestle in many places. He was there in the ring when I almost broke my neck in WCW; thank you Mike for NOT making it any worse. Low-Ki and Daniel Bryan/Bryan Danielson, who helped me get started in Ring of Honor, who helped build that company. Then the two people whose careers I will always be associated with because of the rivalries and friendships that I made with them — Samoa Joe and A.J. Styles.

“Over the course of 22 years, I’ve had the opportunity to tag with a great many talents, whether it was Elix Skipper or Low-Ki, or Donovan Morgan or Matt Sydal or A.J. Styles. 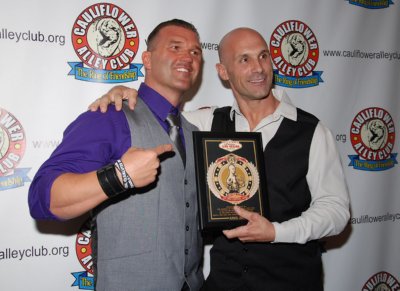 “But truly the best and brightest of those people that I got the opportunity to call my partner is my friend Frankie Kazarian. Frankie, the words partner and friend and brother are inadequate to express my feelings for you. For the last three-plus years, in this grand game of ticklebutt that we call Bad Influence and The Addiction, I am so proud to walk every aisle I have ever walked with you by my side, thank you so much.

“Finally, I’d like to thank my wife, Lisa, who ironically couldn’t be here tonight but has always been there for me. Lisa, you are a better spouse for me than I could ever hope to be. I hope that being up here and having this makes you proud. You and the two children that you mothered for me, I thank you so much for all of that.

“And finally, thank you to all of you. I hope I continue to earn your respect every time I walk into a ring. Thank you very much.”