Knockout? Well, she’ll knock the teeth out her of opponent, male or female.

Tough as nails? She’ll be taking part in a street fight with her partner Cremator Von Slasher in an upcoming match.

Creative? She’s placed her opponent in a body bag and afterwards brainwashed her. 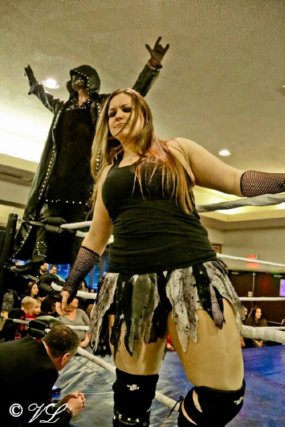 “I feel like the indies will always be more accepting of me and my character and my style; I am a big girl and a lot of the time I am the same size as the boys,” Von Slasher told SLAM! Wrestling.

For the 5-foot-6, 176-pound Von Slasher there is no hesitation in joining her partner Cremator Von Slasher to take on two such competitors as Tony Baroni and Billy Suede in a Street Fight for the VIPW Tag Team Titles; or on April 25th, at the Cloverdale Fairgrounds in Surrey, British Columbia, switching gears to battle Bambi Hall in a first time ever Ladies Ladder Match for the ASW Women’s Championship (see ASW on Facebook).

“Tony Baroni and Billy Suede are in a stable with Kenny Lush called the Wise Men, and last time we faced them Kenny Lush bodyslammed me on the floor so I am definitely looking for some revenge there,” Von Slasher recalled.

With regards to Von Slasher’s feud with Bambi Hall it started in 2014, but the roles of heel and babyface at first took a surprising turn.

“With Bambi, it always funny because of her baby face she just looks so innocent,” remarked Von Slasher.

“We have tried it with her as a heel and me as a babyface, and to me it just doesn’t feel right. I am too good at being mean to be the one to root for in a match. Once I was trying to hype her up before the match, and I told her, ‘Think about things your mom did to you when you were a kid that made you mad,’ and she just said, ‘but I don’t have anything’… My response was, ‘%$# your mother for giving you a good childhood!’ I love working with Bambi because she is always trying to get better and she is always down to experiment, which pushes me into trying to think of cool things. I feel like her and I have barely scratched the surface.”

The 26-year-old Von Slasher would like to face new opponents in 2015 in order to have more variety. That desire to expand her horizons has led Von Slasher to utilize her creativity as much as possible which was apparent during her feud with KC Spinelli from 2012 to 2014.

“I still get chills when I think about our first match together, it was just awful,” recalled Von Slasher. 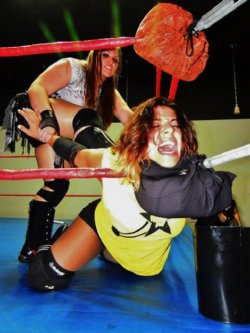 “Spinelli and I had a terrible match. I think my pride was hurt a little bit and I just kinda vowed to not have that experience again. We shared a terrible experience and we had nowhere left to go, but up. I think I have had my best matches with her. We just gelled so well together. I have never had a wrestling marriage like that before. I got a chance to develop Riea as a character and to show more and more of it every match. I was so used to having my match ideas shot down, but she liked the way I did things. It totally gave me confidence. We had a lot of fun feuding between the online promos, who can make a better video, to the first women’s body bag match that I’ve ever heard of. We even broke some walls. The second hole was the night of our tables match in Big West Wrestling, the finish was I was kidnapping Spinelli… so I whip her into the wall she goes through it and we just think, ‘not again!… Well I guess let’s get the hell outta here!’ and we got in our car and drove far, far, away from the venue. We ended up both receiving PO envelopes with ‘Wall Breaker 1’ and ‘Wall Breaker 2’ on them. As terrible as it was to damage the building by accident, once it was all dealt with, we had good laughs about it. I believe Spinelli is quite pleased with the story actually.”

When SLAM! Wrestling caught up with KC Spinelli in Paraguay, that sentiment was readily apparent.

“Riea’s my girl; I’ve never had as much fun living in B.C. wrestling anyone else as much as Riea,” expressed Spinelli enthusiastically.

“She always came with ideas. Her creativity is through the roof. It was always a pleasure working with or against her. She gave me some of my funniest and first time matches. In Big West Wrestling, her evil family kidnapped me and turned me into one of them. It was honestly the best angle I had the opportunity to work my five years out in B.C. I owe a lot to Riea. If it wasn’t for her I wouldn’t have had anyone to connect all these amazing memories we made together and of course being able to wrestle as much as I did. Unfortunately since moving we obviously haven’t been able to, but that hasn’t stopped Riea from taking over.” 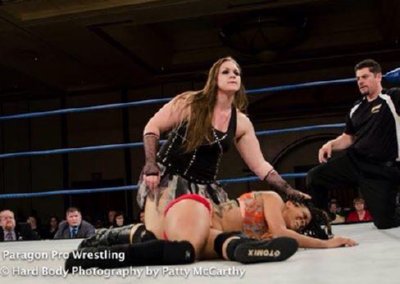 “She loves to fight and she’ll go toe-to-toe with anyone,” elucidated Washington. “She works very hard to have the best match with everyone she wrestles. She is a very underrated talent in this business, often over looked and underutilized. You don’t see many girls with her look and character. Winning the VIPW Tag Team belts with her was a great moment. The crowd loves The Von Slashers and they went wild when we won. Of all the people I’ve tagged with I’d have to say she’s my best partner. I don’t think of us as a mixed tag team we’re just a tag team.”

What inspired Von Slasher to become a professional wrestler? She recalls watching wrestling when she was about 11 years old, intrigued especially by the finals of the Terri [Runnels] Invitational Tournament that took place at the WWE No Mercy pay-per-view event in October 1999. 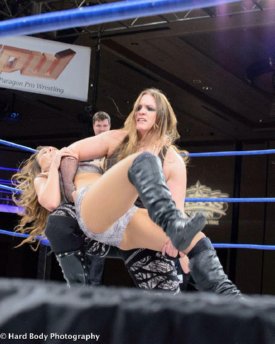 “Jeff Hardy really caught my attention; I thought he was the coolest, with his crazy hair and his flippy @#$!; I was hooked because of him,” reminisced Von Slasher.

“When I went into Grade 8, I started talking about wrestling with a new buddy I had met; he told me that his big brother wrestled with a company in town. I lived in a small town. There wasn’t much there so I just thought, ‘What luck! This must be meant to be!’ Still being so young I had to beg my mom’s permission to let me train. The company was called M.W.A. (Maniac Wrestling Alliance in Prince George, B.C). Legally on the waivers you had to sign for training you had to be 14, so the day after my 14th birthday I starting training. I am sure my parents always thought it was just a phase I was going through, but here I am 26 and am still doing it.”

Von Slasher’s original trainer was The Mauler, Stuart Brown, who told her right off the bat that wrestling was a judgement sport and warned her that politics played a huge role in the business.

“At my young age at the time I didn’t quite understand what that meant, but now it is all so very clear,” commented Von Slasher. “It’s called professional wrestling for a reason, so make sure to always maintain your professionalism. He was really big on people needing to pay their dues, you are expected to do posters, and set up the ring or you don’t wrestle. I feel like I always busted my @#$ and paid dues I worked for my spot, and it is how I was brought into the business.” 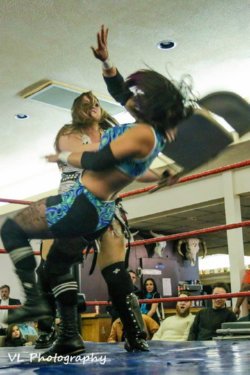 Riea Von Slasher lays out KC Spinelli with a chair in VIPW.

The Mauler, Stuart Brown, remembers those days well. “She always had potential with her ability and when she was focused she was great,” Brown said. “She was an extremely hard worker and would always do everything asked. Her bumps right from the get go were perfect. We had no other girls for her to wrestle so she trained and wrestled against the guys. They had a hard time working her and when they did it looked like crap. Swinging soft and worrying about hurting her. I told her if they do that to her she was to just stiff them. This worked out good and bad because then for a long time it was always stiff.”

During this period of her career, Von Slasher was stuck refereeing a lot of the time because of her inexperience in the squared circle. At that time there were not many female wrestlers for her to have matches with, and women wrestling men was not as accepted as it is today. Also, distance was an issue since she lived in Prince George, in mid-British Columbia, and it would usually require a minimum of eight hours to travel to a show.

“At a young age I also had a lot of personal issues,” explained Von Slasher. “I had bad depression. I had something called Borderline Personality Disorder and a few other things going on. I spent a lot of my later teen years battling demons I guess you would say.”

Western Canada’s Vance Nevada feels that Von Slasher starting her career mostly wrestling male opponents has had a huge impact on her.

“It created a very unique style of work that is apparent when you watch her perform,” said Nevada. “One of the greatest hurdles that she has had is that she’s not an aggressive self-promoter — she just wants to get to work — not deal with the political element of the industry. It is great to see her now getting opportunities as a headliner for All Star Wrestling and working dates on higher profile shows in the U.S. Riea Von Slasher is easily THE most underrated woman in Canadian wrestling.”

When Von Slasher isn’t busy with her day job as an On-Call Relief Employee (OCRE) for Canada Post, is very much focused nowadays on fulfilling several of her career goals, one of which was wrestling in the United States. 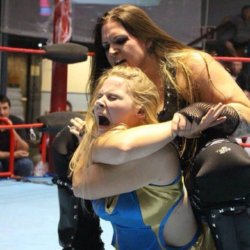 “It was always on my to do list,” explained Von Slasher. “After missing out on two opportunities it was just like, finally a match here. I would love to go back. I would like to make it out east just to be able to say I wrestled ALL across Canada. I don’t think I have ever gone farther than Winnipeg, but I could be wrong. I haven’t had any tryouts for the major promotions, but I have never looked into them either. I would like a chance to wrestle for SHIMMER just once before I retire, whenever that may be.”

In terms of future opponents that she hasn’t had the opportunity to wrestle yet, one Von Slasher named was Lisa Marie Varon, a.k.a. Victoria in WWE and Tara in TNA, who she recently met.

“I have always looked up to her; I think she is just amazing,” said Von Slasher. “When I first started watching wrestling it was the Attitude Era and there was a lot of girls who weren’t good, but they did do a lot of bra and panties matches. For someone like me I was never interested in doing matches like that … then Victoria came in. I was like wow, this girl can work! I would love to get a chance to work her just once.”