Post-WrestleMania Raws have become spectacles that display some of the best or worst of the WWE Universe, depending on your view. Some seem to enjoy the mostly harmless fun and enjoy a Raw that actually has an atmosphere for once. Others feel the fans go overboard in trying to make the shows about themselves (“We are awesome” is something everyone should agree is horrendous.) Monday’s crowd in San Jose was no different than what we’ve come to expect the past few years.

And maybe that’s the problem. 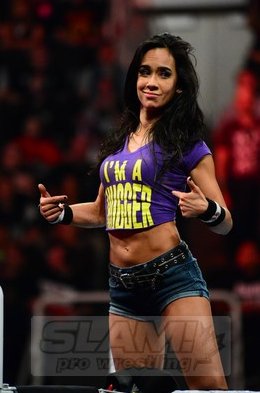 AJ Lee at Monday Night Raw plays to the audience after her match. Photos by Mike Mastrandrea

With the rise of NXT, the focus on women’s wrestling has been sharper than ever. Seeing a branch of the WWE give women time and storylines that are comparable to the ones men are given is a change of pace.

These hardcore wrestling fans likely made up a great portion of the crowd Monday night in at the SAP Center. As evidenced by some of the grief they gave wrestlers (“You look stupid!” to Sheamus), this crowd was smarter than your average WWE audience. That’s what makes what happened all the more perturbing.

A couple of hours into the show, a six Diva tag match featuring The Bella Twins and Natalya against AJ Lee, Naomi, and Paige went on. Featuring some of the company’s better Diva workers and the drastically improved Bellas, it was deserving of some attention and intrigue. The emphasis shifted from the decent contest to the fans, as so many post-Mania matches have had happen before. The chants were out of the ordinary though, as audible groups chanted “Nattie s—- Tyson,” “Brie s—- Bryan,” and followed the same structure towards the other women in the match, save Paige as she isn’t dating a wrestling notable. The same types of fans that lament that Paige was in a better showcase in NXT compared to the mere minutes of main roster Divas matches couldn’t resist putting themselves over with a joke on a night where more eyes are on the show than usual.

Aside from the obvious issue in the tasteless taunts, it reveals a larger issue with wrestling fans and the use of women in wrestling. On the main level, WWE is guilty of institutionalized sexism. Women are not given gimmicks beyond “crazy” and “hate each other.” The less “conventional” looking the Diva is, the deeper the trope is applied. Being that mainstream wrestling is generally about spoonfeeding fans who they should root for, pushing this sort of agenda (to a show that is generally more child-friendly, nonetheless) only encourages behavior like this. The vicious cycle has yet to be broken.

In fairness, the new trend of Divas has just set in recently and unfortunately needs time to sink in for whatever reason, but disturbing trends still exist. Look at the thinly-veiled sexual tension between the “crazy” frienemies AJ and Paige or the “vengeful exes” of Fandango in Summer Rae and Layla. While these gimmicks may make Vince McMahon slap his knee in gorilla and Kevin Dunn raise an alleged ruckus on planes, they are insulting to both the workers themselves and the growing market of fans who want women’s wrestling to be just that.

The change needs to be made from the top and that includes both fans and corporations. WWE fans have shown to be perfectly capable of rejecting what is given to them (see Reigns, Roman) and should be above to feeding into behavior that gives the companies impressions that this is acceptable writing. This also stems from a stigma from fans to not see things as they are and be largely selfish to their own needs. 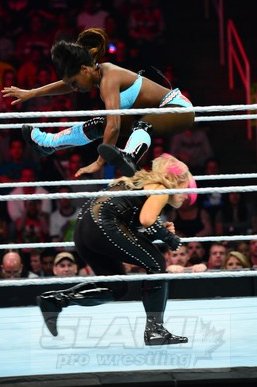 Not every woman is going to be working like Kobashi and Misawa or telling a tale like Flair and Michaels. Nor do they need to be, as the definition of wrestling differs from person to person. Five-star ratings have spoiled us into pigeonholing wrestlers into molds that aren’t made for all. Some prefer the straightforward style and workrate. Some prefer good gimmickry and storytelling. The women in WWE reflect just that, from Nikki Bella being shown to be capable of performing the latter and Paige the former. Their motivations are different and they are using their finite time in the industry to leave an impression for the history books or the roads to their post-wrestling future. No Diva, Knockout, or flat-out wrestler are the same. And, in truth, they don’t work for you or you or you. They work to entertain a collective or an idea of wrestling mainstream. They are doing what they love and shaping it to maximize their time on the highest level by doing as what the bosses want.

And what impression do you give those bosses when you’re chanting about what women may or may not do in their bedrooms rather than what they are presenting to you in the ring?

Realistically, wrestling isn’t going to be a paragon of virtue because of institutionalized ideas that support sexism, racism, body shaming, and many other awful things that are reflected in day-to-day life. However, with the ability shown to reject pushes bases on appearance or race (“Everybody say New Day!”), one of the most misunderstood and mistreated sectors of wrestling still shows no signs of changing in the mainstream.

For all the criticism you can toss at NXT audiences, they tend to cheer and boo women in the same manner they would a man because women are treated in a similar manner regarding their place in a show. It’s bizarre to being looking at two wings of WWE fluttering in opposite directions, but the unconventionality of the situation should be eschewed for the larger message. 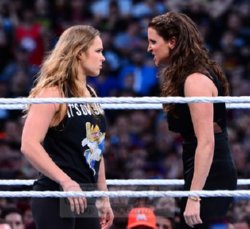 Women’s wrestling will not improve to your standards if you use a hashtag to be trendy. Fans and WWE have created an echo chamber that encourages misogyny and that trickles down. You aren’t going to draw megastars like a Ronda Rousey into the game when she is given three minutes and is also objectified by fans and announcers for those 180 seconds. In that way, the quality of women’s wrestling will not improve beyond independent promotions and your ability to create stars will suffer because of the lack of women willing to move from where they are respected or even enter wrestling at all.

The cliché tells you to practice what you preach. And very rarely should tweets be repeated outside of the Internet vacuum, if millions of people having a social network to voice their opinions has taught us anything. However, wrestling is not a world of conventionality and the idea, as backward as it may sound, seems to carry water in this case.