From feminist-driven outcries of support to sarcastic mockery, the #GiveDivasAChance hashtag thrust WWE’s use of the Divas division to Twitterverse infamy.

Spurred by last week’s women’s tag match between Emma and Paige and the Bella Twins that lasted less than one minute, fans and wrestlers alike voiced their opinions on the backlash-inspired worldwide trend that lasted roughly 1.5 days.

One of those wrestlers, LuFisto, a former Combat Zone Wrestling Iron Man Champion, said she did not watch Raw last week but discovered what occurred after seeing the hashtag. But there was no shock value in the fact that it centered on a short Divas match. 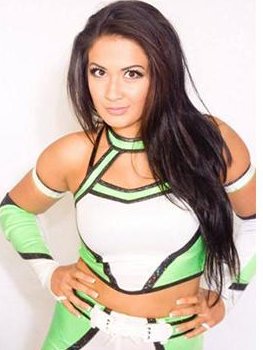 “There are a lot of very good female workers in WWE, including girls who have lived in a wrestling environment all their life, such as Paige and Natalya,” said LuFisto, originally from Montreal. “However, TV time of matches is always restricted and they are the first thing that’ll be cut on a show if another match takes too much time.”

But Darin Childs, of Austin, Texas,-based Anarchy Championship Wrestling said the hashtag “was one of hope.”

“The Daniel Bryan WrestleMania 30 run proved that fans have the power to create change,” Childs said. “The Divas have the potential to sell out arenas just like the men.”

The Divas division currently, according to Childs, is “essential garnish to the main course, which in their eyes is John Cena.” Regardless, he said he hopes “to see gender roles fade.”

“I would like to live in a world in which everyone gets the opportunity to see their hard work come to fruition,” Childs said.

For an audience to care, wrestlers need to tell a story with their matches that “go through that roller coaster of emotions,” but LuFisto said that’s not possible in 30 seconds. Another hindrance is the “big lack of female veterans to lead the way.”

“They will hire very experienced male indy workers who produce the best matches on TV now at NXT, such as Kevin Owens, Sami Zayn, Adrian Neville and Finn Balor. However, this is not the case for the women’s division,” LuFisto said.

Viewing, the product from a different perspective, Su Yung, a former WWE developmental wrestler currently working for various independent promotions, said it is great that WWE features the Divas in a variety of ways.

“I enjoy seeing more women on my wrestling shows versus when they weren’t,” Yung said. “So, girl power!”

While every company — from TNA and Ring of Honor to various independent promotions — is different, Yung said “comparing the monsters isn’t fair due to situations.”

“It is harder on the independent scene with girls risking their dreams and facing harsh critics that believe you don’t make it unless you make a ‘company’ and that’s not true at all in some opinions,” Yung said. “I think some of the greatest ladies in wrestling come from the independent scene.”

LuFisto said she hopes WWE will realize a “genuine interest” exists for serious women’s wrestling and that WWE will take that to heart.

“They should hire the women on the same criteria they are hiring NXT wrestlers right now, which is having pure talent, lots of experience and knowledge and a following,” LuFisto said. “Yes, eye candies are important. They sell a lot of merchandise but they also need those other girls to guide them and make them look like a million bucks when it comes to wrestling.”

Yung said she hopes to see more “hashtags and support for wrestling” evolve out of #GiveDivasAChance.

“It’s opening doors and opportunities that I know WWE will capitalize in their own way since they are a long lasting and smart company,” Yung said. “Their genius is in their own right. It might even be a shirt or something.”