Mat Matters: WWE in Toronto leads to a host of questions

TORONTO – In its arrogance, WWE leaves way too many questions unanswered, especially for, say, an eight-year-old son of a long-time wrestling reporter who has seen it all by now.

WWE was in Toronto Saturday night for a rollicking sold-out show at the Ricoh Coliseum, a mid-range venue with probably 8,000 fans shoehorned into the arena.

Since it was a Saturday night, the place was packed with parents and their kids — no doubt Santa Claus delivered a lot of tickets!

It also likely means that I was not the only one bombarded by questions by their offspring. 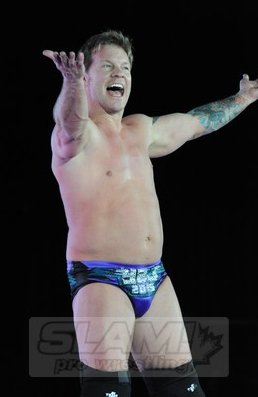 “Why is he nicknamed Y2J, Dad?” Photos by Mike Mastrandrea

Many of you have met my son, Quinn, through the years, as I have written about him before, and he’s even helped with a story or two here. He’s gotten into pro wrestling through me, naturally, but not in the traditional ways that I did at the height of Hulkamania.

For him, much of his knowledge of WWE stems from what he’s read and the video games he plays, including an old version of Smackdown vs. Raw from 2008 on our Wii, and current stars that are featured in the online games WWE SuperCard, and, to a lesser extent, WWE Immortals, which didn’t hold his attention or offer the depth of information that he craves.

So there we are at the WWE house show, and he asks very pertinent questions.

That’s a good question, and Lord is it a dated reference. I had to explain about the turn of the century, when everyone was freaking out about our computers perhaps crashing, destroying civilization as we know it, because clocks would not roll over from 1999 to 2000.

This leads to the question, When was the last time WWE explained that nickname? Or any old nickname? The company seems to take for granted that fans have a deep knowledge yet does little on its five hours of prime time television to explain the past.

For the record, we do not have the bastardized, watered-down version of WWE Network that Canada gets, since we are Bell customers. And really, telling someone that the information is available in its archives on WWE Network is a little like saying there is a needle somewhere in that haystack. (One of the laugh-out-loud moments for me was when Tony Chimel was pimping the Network and it got booed.)

Trucking out NXT wrestlers for tours by the main roster is all well and good, and I understand why it happens — injuries to others, valuable experience, hometown heroes — but it leaves all but the hardcore fans mystified about who the person is. Again, given that NXT doesn’t air in Canada, except on the weaker version of WWE Network that we are stuck with, makes it even more challenging for fans to know why they should care about someone they don’t know. There are only so many cheers or boos in a fan to use up! 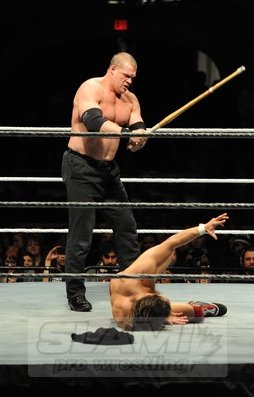 Kendo Kane perhaps could be a new nickname?

3) “So a No DQ Match and a Street Fight are the same thing?”

Dunno, son. The terms have been around for years and no one takes the time to explain rules for matches any more. For that matter, as Kane and Daniel Bryan used chairs, a table, the ringside stairs and a Kendo stick during the match, couldn’t we call that a Hardcore Match too? Or a Tables and Chairs Match?

4) “Why aren’t they coming back until the end of September?”

Does absence make the heart grow fonder? By staying away for seven months, WWE will create demand, sure, and virtually guarantee another sold-out show at Ricoh on September 25th. Son, believe it or not, there was a time that WWF came to Toronto every month or two, and before that, there was weekly wrestling at one point in town. What changed? It’s too complicated to go into here, but let’s say that society has a hell of a lot more choices in where to spend its disposable income in 2015 than it did in 1955.

Judging by the amount of merchandise around the torsos and waists of the kids in attendance, there isn’t much to worry about for the WWE monster … even if it doesn’t bother to explain things.