“They just keep taking pieces of me, bit by bit, a little piece at a time.” — Kamala Speaks

This has been a truthful analogy throughout James Harris’s life. Mistreatment during his career, attempting to chip away his dignity or his literal amputation. He was born to poor, humble beginnings in the deep south of Jim Crow America. Racism was prevalent. “Yes, Sir — No, Sir” was the vernacular of every black resident. Young or old, when addressing a white man, you best bow your head. Not too long ago, that was customary and acceptable in that part of the world. Humility was not gracefully insisted, but rather aggressively demanded. Through it all, he’s is devoid of hate or resentment. Harris was (and is) a humble, affable man. 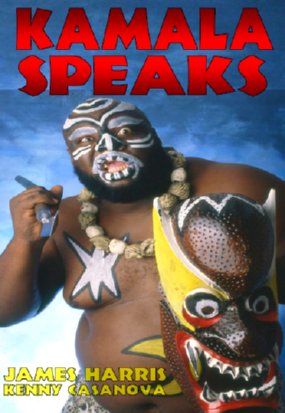 On a whim, he decides to take up “rasslin’.” He meets the great Bobo Brazil, an African-American wrestler, who broke just as many racial barriers as he did opponents with his world famous “Coco-Butt.” Brazil was a black icon. A huge worldwide wrestling sensation. Many wrestling historians, including myself, will find it surprising that Brazil broke James into the game. I never knew that. Just one of the many interesting tidbits of wrestling trivia found in Kamala Speaks, the new autobiography of Harris.

Harris and co-author Kenny Casanova provide readers with a factual account of the career and life of Harris, not to mention an insightful look at one of the most unique characters and ingenious gimmicks of the 20th Century.

“Let’s find a monster. A big black guy. Let’s make him an African native … maybe even a cannibal!” How I would have loved to have been a fly on the wall, to witness the foregoing creative process. No one knows the exact exchange between those two Barnumesque brains of Jerry Jarrett and Jerry Lawler. Can either precisely recall that moment of genius? I’d like to imagine it, on a hot, sultry Tennessee Williams front porch. Both sipping mint Juleps, and fanning themselves in the summer moonlight. But then again, my imagination gets the best of me when romanticizing about such things!

Still, that moment, in which all the creative juices are flowing, and a mere notion that unknowingly at the time would give birth to an iconic figure. It’s a real life tale of Dr. Frankenstein, that only “Famous Monsters Of Filmland” could imagine! There had to be doubters. THIS WILL NEVER GET OVER. Lawler and Jarrett just threw together a flash in the pan, one off, goofy gimmick to get the King over and sell-out the Mid South Coliseum! Who really knows? Maybe “Kimala” (yes, spelled with an “I” in Memphis) was just an experiment. If it didn’t get over, so what? Just throw it in the bin with the rest of Lawler’s short-lived sideshows.

Harris was meant to be Kamala. He was born to portray this character. No one could have done this gimmick any better. That’s a pretty big statement, isn’t it? Well, it’s true. There have been countless imitators, and they have ALL failed. It doesn’t sound like that difficult of a character to pull off — buy face paint (check!) … buy some “tribal” accessories at the flea market (check!) … fashion a spear from a broomstick (check!) … and no need to buy wrestling boots. (Natives don’t wear boots!) Gimmick complete! Or so, you would think, right? It’s really not that simple. Getting yourself a bowler, mustache and cane doesn’t make you Charlie Chaplin.Excuse my audaciousness, but I will compare Harris to Chaplin. Kamala to the Tramp. Both are mute. His mannerisms, facial expressions, and body language, mostly subtle, brought the character to life. He wrestled like, he “didn’t know how to wrestle.” After all, Kamala is from the deepest, darkest depths of the African jungle. There are no TV sets, not to mention any accredited wrestling schools in Idi Amin’s Uganda! He is an ancestor of a lost civilization, originally discovered by the great African hunter, J.J. Dillon, on one of his many safaris to the dark continent. (What a great back story!) Kamala didn’t speak English, nor did he really speak much at all. Somehow he learned how to chop, kick and occasionally choke. He did all three with great proficiency. Under the order of his “handler” he would bounce off the ropes and squash his victim with a belly flop splash. Even the most talented hero would surely be crushed lying under the 400 pounds of this beast. A camera close up of Kamala at that moment would find his face grimaced like a lion, disemboweling his prey like the king of the jungle. He was a true monster. Fans feared him. They would run at the sight of him. In Japan, it was like watching a Godzilla movie come to life. They believed in Kamala, because Harris made them believe.

Harris knew how to wrestle. He tussled with the greats in the U.K. He grappled with the shooters in Germany and elsewhere. James knew how to handle himself against any foe. Speaking of foe….FEE, FI, FOE — Andre the Giant was an asshole. It’s on page 117. James had a pocket sewed into his tights to pack a small handgun, to protect himself from The Giant. Also, read about Abdullah the Butcher’s backstage politics, the murder of Bruiser Brody, Mid South memories, the epic Hulk Hogan feud (can never forget the Apter mag cover with Hogan’s head on a spear!), the infamous SummerSlam payday (or lack thereof), among many other recollections.Harris was mistreated repeatedly during his career, mostly by promoters. Why this lack of respect? Others received preferential treatment, when he rarely did. Some will say those occasions were racially motivated. James does not conclude that. He’s has too much pride. He allows the reader to draw their own conclusions.

Harris’ greatest battles were not in the ring. The giant of a man from Senatobia, Mississippi, is now a double amputee. Diabetes had him on the ropes, but not powerful enough to finish him off. Although he’s not as financially secure as many of his ring brethren, he enjoys a simple, humble life in the town of his birth. Through it all, he has maintained the dignity of a lion.

Kamala Speaks will inspire and educate the novice and most knowledgeable wrestling fan. This wrestling book, unlike others, is not about boasting nor is it an ego-driven diatribe. Do yourself a favor, and grab a copy. You’ll be impressed — just like the first time you saw Kamala do a leapfrog!

CARMINE DeSPIRITO is the former editor of Wrestling Eye Magazine, and promoter of Mid American Wrestling in Milwaukee, Wi 1993-2007. He currently works as an advisor to the NWA and can be found on Facebook.