Nash can add Hall of Fame to his Mania memories

WrestleMania is special for all of the participants. It leaves a lasting impression and a feeling of accomplishment. To be on a WrestleMania, in any capacity is an honour and for Kevin Nash or Diesel, it is a double accomplishment as he enters the WWE Hall of Fame on WrestleMania weekend.

Kevin Nash appeared at four WrestleManias — twice as outside the ring muscle, once as a part of The Streak, and a time as the defending champion. Kevin Nash has made his mark in the wrestling industry by not only appearing at four WrestleManias, but by also bringing wrestling to the masses with his hugely popular N.W.O. group in WCW. Whether you know him as Kevin Nash or Diesel there is one thing for sure, he can not be forgotten. 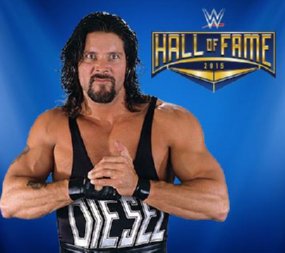 Recently, SLAM! Wrestling caught up with Nash at the Niagara Falls Sports and Hobby Expo where he reflected on his moments on the biggest stage of them all.

“I’ve had some great moments. They are all special,” said Nash.

To be on a WrestleMania is to become a part of pop culture and that was not lost on the former WWE champion. “WrestleMania has gone from an event to the Super Bowl or Dayton 500,” explained Nash. “It is a spectacular event is what it is now.”

Nash, a one time WWE World and Intercontinental champion, looked back on WrestleMania X as his top moment because it was his first time being a part of such an awe inspiring event.

The ladder match between Michaels and Hall is considered by many to be one of the greatest WrestleMania matches of all time. “I was only out there for a few minutes before I got thrown out for interfering,” said Nash. “It was nice to be part of such an epic match.”

With a smile on his face Nash reflected on his times on a WrestleMania card. “Of course the first time you headline, which for me was WrestleMania XI, Shawn and I wrestled,” Nash walked in to the match as champion and out of the match as the WWE champion. “I was against Taker at (WrestleMania) 12 and Austin in Toronto was great,” said Nash.

This weekend in San Jose, he will add another WrestleMania moment — his induction into the WWE Hall of Fame.

The news of his induction had not been released at the time of this interview, though WWE allowed Rolling Stone to break the story early on Monday. Others being inducted into the 2015 WWE Hall of Fame are “Macho Man” Randy Savage, Arnold Schwarzenegger, Rikishi, The Bushwhackers (Luke Williams and Butch Miller), Alundra Blayze / Madusa Micelli, Larry Zbyszko, and Tatsumi Fujinami.

“I’ve been called just about everything, but this is the first time I’ll be called a Hall of Famer. It’s nice,” Nash told RollingStone.com. “It’s been a long 25 years, but this business has been great to me. Without wrestling, there’s no way I’d be where I am today. I’d probably own a strip club someplace.”

Also this weekend, on Friday night, Nash is hosting Shenanigans, “the biggest party of the weekend in San Jose” at a night club called San Jose Bar and Grill, which is close by Wrestlecon and the Convention Center. Besides Nash, other wrestlers promised for the event are Rosita, Melina, Shelly Martinez, Al Snow, Gunner, Jessie Goddarz, Austin Aries, So Cal Val, Abyss, Chris Masters, The Headbangers, and James Storm. All guests must be 21 years or over. For more details, see the eventbrite.com website.