Over its 30 year history the “Granddaddy of them all” has so many unforgettable moments that have gone down in wrestling history. Whether a conclusion of a match, a special event or a moment between two superstars; WrestleMania has truly been a showcase for the immortals and immortal memories as well. 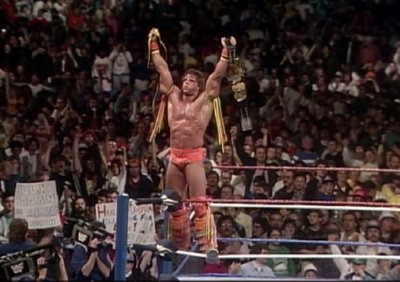 Facing the Ultimate Challenge from the Warrior at the first WrestleMania held outside of the United States, Hogan’s misses his finishing move setting up a much-needed changing of the guard in the WWE. 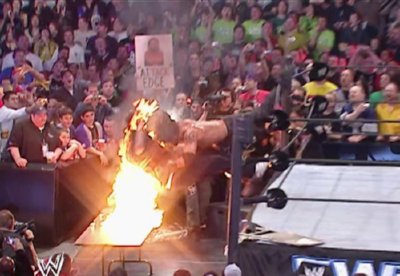 Lita’s low blow with barbed wire baseball bat set-up one of the most insane WrestleMania moments in which Edge speared Foley through a flaming table outside the ring, barbecuing both combatants. Talk about hard-core. 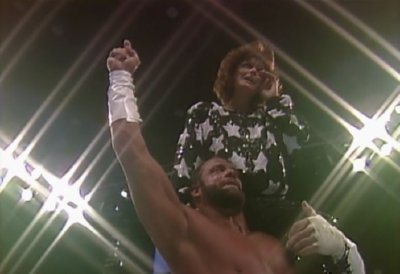 After heading down a dark path with Sensational Sherri as his manager, the Macho Man loses his retirement match with The Ultimate Warrior. When Sensational Sherri decides to end their partnership by kicking Savage when he is down, Elizabeth jumps the barricade and comes to the rescue. Macho and Liz hug, cry as Gorilla Monsoon utters the famous words…”He lost the match but he got something more valuable, his woman.”

Arguably the two biggest icons of their respective eras, The Rock and The Hulkster meet in a match that largely due to the crowd’s positive response to baddie Hogan, led to the end of the nWo’s return months later and reignited Hogan’s career as a face in the WWE. Hogan won the WWE World Heavyweight title about a month later at the BackLash pay-per-view. 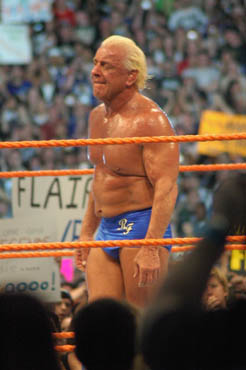 Wrestling under the stipulation that the next match he lost would be his very last, Ric Flair’s luck ran out at WrestleMania 24 when HBK apologized before landing Sweet Chin Music. Since the ending of the match was a forgone conclusion, many of the events leading up to WrestleMania were held and viewed as Flair tributes culminating with his induction into the WWE Hall of Fame.

The epic 60-Minute Iron Man match itself will always hold a special place in the annals of WrestleMania history as well as Shawn Michaels’ genuine, heart-felt celebration after he had won the title for the very first time.

Another impressive, daredevil WrestleMania move belongs to Edge. Jeff Hardy hangs in mid-air clutching onto the tag team titles for dear life as Edge decides to Spear him from another ladder. J.R. sums things up perfectly by saying: “For the love of God, Jeff Hardy maybe be broken smackdab in half!” A classic scene at one of the best WrestleManias ever produced by the WWE.

Nobody will ever forget the grotesque image of “Stone Cold” Steve Austin bleeding profusely as Bret “Hitman” Hart cranks up the Sharpshooter. Austin eventually passes out and the match is called. 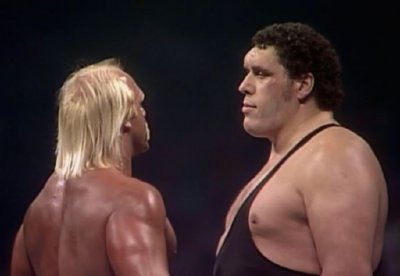 2. WrestleMania 3 – The slam heard around the world

Standing the test of time, WrestleMania 3 is still one of the top WrestleManias and one of the biggest reasons why is the extraordinary Hogan and Andre feud. The clash of the wrestling titans culminated in Hogan slamming the 520 pound Andre to the canvass. Impressive. 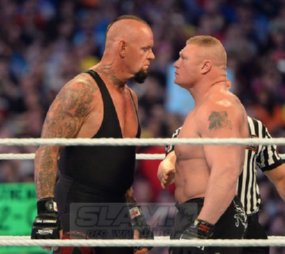 Up until last year, Hogan’s slam was the definitive WrestleMania moment for so many reasons. That all changed when The Undertaker’s celebrated Streaks ended. Certainly, the most shocking moment in WrestleMania history, it was also the most controversial and perhaps the most talked about. The immediate emotional response was unprecedented and can still be felt to this very day.