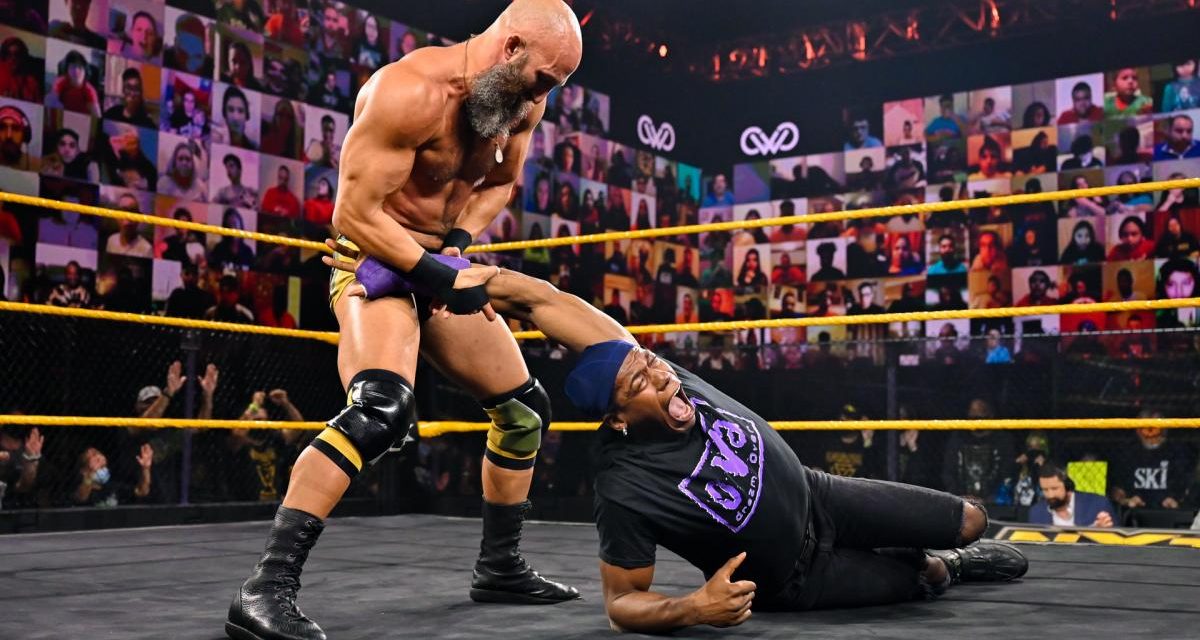 TORONTO – Just two weeks after suffering a rib injury during Ring of Honor’s 13th anniversary show, Tommaso Ciampa returned to action on Sunday for a Smash Wrestling show. Prior to the match, he expressed his reservations on how he’d be able to perform; but after the match concluded — a loss to Chris Hero — it’s fair to say that Ciampa didn’t take it easy on himself or his opponent. 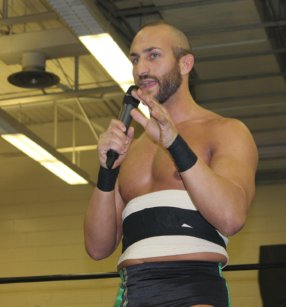 Tommaso Ciampa speaks to the Smash Wrestling crowd on Sunday in Toronto. Photo by Greg Oliver

The original injury occurred on Sunday, March 1st, as ROH presented a pay-per-view from Las Vegas. The main event was a four-way bout, with Jay Briscoe defending the ROH World title against Hanson, Ciampa and Michael Elgin. After the 21-minute match ended, with Briscoe retaining, Samoa Joe arrived, presented Briscoe with the belt, and the two shook hands.

While all that was happening, Ciampa was out of it.

“It was real weird, man, because when it happened I knew something had happened, but I didn’t know what,” Ciampa told SLAM! Wrestling about an hour before his bout on Sunday. “It was more painful than when I tore my ACL, seriously. It was bad. I kind of finished the match blacked out, I was a little on autopilot.”

Knowing something was wrong, but unsure what, Ciampa returned to his Las Vegas hotel room.

“The next morning, when I got up to go to my flight, I actually passed out from pain, which I’ve never done before,” he said. “I had to have wheelchair assistance to get me home, which sucked. It was real weird. I’d say it was embarrassing, but I was kind of blacked out the whole time.”

An X-ray revealed two fractured ribs, but it was the internal swelling — since gone away — that caused the pain and the passing out.

The healing he dealt with as best he could, but missing shows was not fun.

Ring of Honor shelved him. “I got pulled from Baltimore, so that hurt me, because if I don’t wrestle, I don’t get paid. I got pulled from Milwaukee too, which stunk, because it’s my hometown. I just missed a lot of stuff. I missed worked with AJ Styles, working in front of my hometown crowd.”

Saturday night in Chicago Ridge, Illinois, Ciampa did make an appearance for Ring of Honor, having a staredown, but nothing physical, with ROH World champ Jay Briscoe. 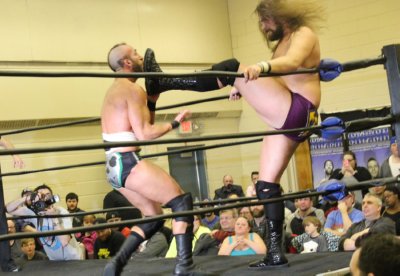 On Sunday, before the bout at the Franklin Horner Community Centre in the west end of Toronto, Ciampa, with his lower ribs wrapped, took to the microphone and confessed that he wasn’t 100% but still wanted to wrestle. He told Hero not to take it easy on him, to which Hero replied: “I don’t need to take advantage of fractured ribs to knock your ass out.”

The match started off fairly tame, with some basic chain wrestling, but degenerated into a brutal brawl — “How are those ribs, m—–f—–!” screamed Hero in an unfortunate faux pas in a family crowd — that left the fans wanting more. (While the wrestling was great, the highlight may have been a young fan, probably about four years old, telling Ciampa to “suck it” and doing the D-X crotch chop; Ciampa walked away, chuckling, before returning for a high five with the youngster — only to pull his hand away at the last second.)

It’s all part of the road back for Ciampa, who made his Smash Wrestling debut. 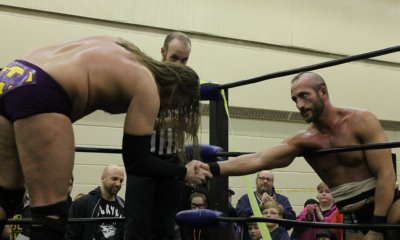 He quickly came up with a list of future opponents on his wish list. “I’m in a weird situation in where I’ve been in Ring of Honor for five, six years and I haven’t wrestled half the roster,” he said, naming AJ Styles, Samoa Joe, Alberto Del Rio, ACH, and Kyle O’Reilly, none of whom he has faced before, as well as Davey Richards and Eddie Edwards, both of whom he has wrestled before.

One of those names might be on tap WrestleMania weekend, when ROH runs its Supercard of Honor IX at The Sports House in Redwood City, on Friday, March 27th. He doesn’t know his opponent on the big card yet. Just announced is the main event of Samoa Joe challenging Jay Briscoe for the ROH World title.

“I don’t get any more pumped up than any other show,” he said about working WrestleMania weekend. “I can’t speak for everybody. Personally, every crowd has its own dynamic. I’m pretty pumped that I’m at Smash tonight because it’s my first time here. Milwaukee is my favourite crowd to work in front of for ROH. I like the Canada crowd a lot, the Toronto crowd. Chicago is hit and miss, Chicago, Philly and New York are tough crowds. It’ll be interesting because Mania weekend is California. We’re just doing one show and there’s so many events going on, so you never know what you’re going to get.”

That goes for “The Sicilian Psychopath” too — you never know what you are going to get.