As the original ECW was about to embark on the last two years of its glorious run, Rob Van Dam was a key player, and therefore is able to offer some tremendous insight on the recently-released DVD from Kayfabe Commentaries — Timeline the History of ECW 1999. It’s is one of the better releases from the series, and delves deep into the last days of ECW.

I would venture to say that we learn much beyond that year. The most interesting part of the DVD is about what it truly meant to drink Paul Heyman’s “Kool-aid” and having faith in the company and that the product was something that still had a future in 1999.

Van Dam is stating the obvious for those of us who were suffering through the early 1990s wrestling product. Since a lot of fans who missed this would come in later with the advent of the Attitude Era — which was itself inspired by ECW — RVD’s view of the product is very valid.

The DVD is still informative with insight on appearance by Sid Vicious and Dusty Rhodes and how they fit into the product.

I also found interesting that with a style so physical, RVD claims he never got hurt back in those days (except one surgery) and even today the various scriptwriters have created more injuries for him to keep him out compare to the real injuries he has suffered. TNA is not mentioned here but the dig at the way the TNA title was taken away from him is evident.

As usual in the series, there is mention of some of the most interesting moments in ECW history, and this time one of my favorite is mentioned: Kimona Wanalaya doing a strip tease to buy time as the ring was broken and they needed to fix it. If you have never heard this story, do yourself a favour and do a little research. 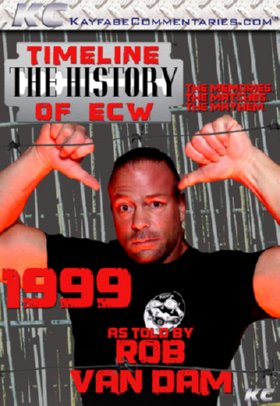 Among the other subjects of interest are ECW action figures, Mike Awesome as ECW champion, garbage wrestling, the television deal with TNN, Taz, Sabu, and his time with Bill Alfonso — also known as Fonzie.

Like I said, what is the most interesting part of this release is RVD faith in Paul Heyman and the future as 1999 was ending.

“We needed for Paul’s word to be true.”

I can totally understand because all of us sitting out there in TV land we wanted ECW to succeed; it was us against them and we were all ECW.

That doesn’t mean there is no funny story about getting paid late or not getting paid at all: “Paul would pay us after the interviews were all recorded but he would always run out of cheques before everyone was paid.”

Paul promised a cheque would be in the mail the next day, and there were times that RVD collected two paycheques the next time around. RVD does admit he was treated better than most in the delinquent cheque department.

He also realized that the boys made it easy on Paul, and RVD was one of many that never wanted to leave ECW.

“I didn’t want to go anywhere, I felt like a sellout going to WWE after the company was done. Took me two months to feel comfortable there.”

In the end, they accepted Heyman for who he was because he was selling what all of them wanted.

They wanted to make their dream come true.

“We thought it was happening … at least I was.”

It is one of the better releases in that series as I said and I can only suggest that we get more RVD interviews in the future about E-C-f’n’-W.