DETROIT – Smackdown came to my hometown on Tuesday night at the Joe Louis Arena and once again Dad got to shoot photos and here are some of my thoughts. My main complaint is a bit too much time was spent showing video from the previous nights RAW, and the familiar vignettes hyping the WrestleMania matches. Maybe nothing wrong with that, but I want to see John Cena and Rusev in the ring, not a Raw re-play on the big screen. 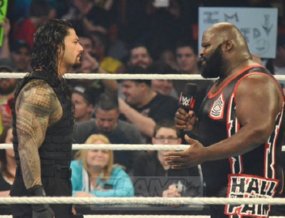 Mark Henry tells Roman Reigns what he thinks of him. Photo by Brad McFarlin

As a matter of fact, most of the video seemed to be of guys appearing on Smackdown who were NOT on the show; most notably John Cena, Rusev, Undertaker, Brock Lesnar, Sting, and Triple H.

Seth Rollins was advertised, but he wasn’t there. I remember when tickets first went on sale, John Cena was advertised as well and then mysteriously disappeared. My Dad said something about how Vince McMahon was using an old Sheik trick, but I don’t get what he means by that.

Roman Reigns didn’t get a lot of cheers or a lot of boos. I thought that was kind of weird less than three weeks before his big match with Brock Lesnar.

And Daniel Bryan is no longer being accepted by the audience as some kind of demi-god.

If I had to pick, I’d say Randy Orton got the most cheers of anyone.

There were a lot of people there, but it was not sold out. It was made to look even better by blocking off seats behind the camera view so people were packed into seats that would be seen on TV.

There was nothing terribly exciting about the matches themselves.

Here is what we saw (Dad helped write it up)

– Show opened with a dark match between the Lucha Dragons vs two local guys that nobody seemed to know. The NXT guys won quickly.

– Cody Rhodes I mean Stardust, Daniel Bryan, Dolph Ziggler, Wade Barrett, and Luke Harper got into the ring, did some talking and got into a shoving match. R Truth appeared on the run-way so they were probably trying to promote the WrestleMania ladder match, as they had a bunch of ladders stacked around the stage entrance. The ladders never came into play.

– Show changed into Smackdown, but at some point, Roman Reigns came down to cut a promo and got interrupted by Mark Henry. Henry got clobbered for his efforts.

– Ryback beat The Miz in a good, competitive match. Sandow was told to stay behind, which in hindsight may have been a mistake.

– The Big Show and Kane lost to Randy Orton and Roman Reigns.