When you say the name “Iron Sheik” to a wrestling fan, regardless of generation, a number of vivid memories come to mind.  If you’re a fan from the 1970s, you remember his bloody battles in the NWA and Mid-South territories.  In the 1980s, you remember his “Boot Camp” match with Sgt. Slaughter, his tag team with Nikolai  Volkoff and arguably launching the Hulkamania era of the WWF.  A ’90s fan remembers his allegiance with American turncoat Iraqi sympathizer Sgt. Slaughter during the heat of the Gulf War. And more recently?  Well, you remember the Iron Sheik for being just slightly crazy.

Over the past several years, the Iron Sheik has re-emerged in wrestling pop culture.  Whether it’s his profanity laced Twitter feed, or his appearances in a number of “shoot”-style interviews and radio shows threatening to break the backs of any number of popular 1980s wrestlers, and make them humble, the Iron Sheik’s popularity, and viability, is arguably higher than ever.  It’s no secret, though, that his popularity has grown from his reputation for being completely uncontrollable.  It’s also no secret that Iron Sheik has battled drug and alcohol addition for the better part of 40 years.

Recently it was announced that the Iron Sheik would be making a very rare appearance in Kingston, Ontario (my hometown) for a private screening of his documentary and then hosting a Q&A session immediately following.  I knew this was an event I simply could not miss, and a once in a lifetime experience I would never, ever forget.  I’m a huge Iron Sheik fan.  I had his rubber LJN figure when I was a child, and kept it until it was literally falling apart in my early twenties.  And I would be remiss if I didn’t mention that The Iron Sheik is the one and only reason why I joined Twitter.  His feed has brought made me laugh so hard my stomach hurts for days a number of times.  However, we’ve all heard the stories, or seen the videos.  Which Iron Sheik would show up?  The one that, during his Class of 2005 WWE Hall of Fame speech was, himself, humble and appreciative of his fame, experiences, and legions of fans?  Or would it be the belligerent Iron Sheik, easily found on hundreds of YouTube interview clips, cussing, and generally being an all-around madman?  I was excited to find out.

The event was held in a large conference room at the beautiful FourPoints Sheritan hotel in downtown Kingston.  General admission was $25, which including the screening of the documentary, and the question and answer period afterward.  Picture and autograph opportunities would be presented at the end of the evening for an additional cost, and there was a plethora of Iron Sheik merchandise available to be purchased as well.

I will be the first to admit, I wasn’t expecting much.  Almost all of the independently produced documentaries I’ve seen have been poorly produced.  Combined with the fact that no one was really sure what shape the Iron Sheik might show up in, I was prepared to be disappointed.  That said, I was absolutely excited to be there.  If this was going to be a mess, I still wanted to have a front-row seat.  Instead what we got was, possibly, the best produced wrestling documentary of the modern era, followed by an incredible experience meeting and speaking with the Iron Sheik himself. 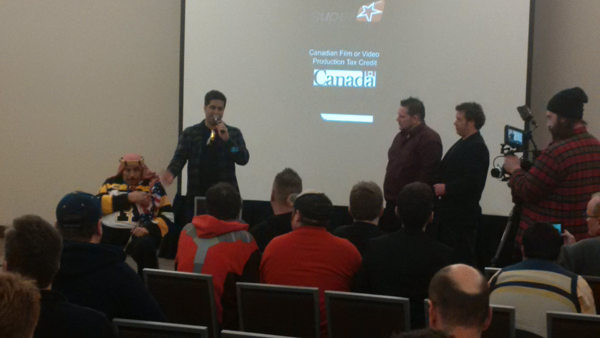 The documentary began after a short introduction from local news anchor and longtime MuchMusic personality Bill Welychka, who himself was very visibly humbled by being in the presence of the legendary Iron Sheik.  The Iron Sheik arrived, in a wheelchair pushed by one of his entourage members, and was deposited in the front row.  After a few moments of technical difficulties, the movie began.  It was immediately clear that this wasn’t your ordinary, poorly-shot, poorly-produced independent documentary.  Vivid images, narrated by the Iron Sheik, almost literally began to jump off of the screen; a masterful production trait that would remain throughout the duration of the movie.

The Iron Sheik, for his incredible journey, has a difficult life to summarize in a 95-minute documentary.  A number of easily recognizable wrestling personalities appear throughout to help move the story along, including Dwayne ‘The Rock’ Johnson, Jim Ross, ‘Hacksaw’ Jim Duggan, Jake ‘The Snake’ Roberts, and many others.  His childhood and adolescence in Iran is thoroughly covered, as is his journey to the United States, his beginnings in professional wrestling, becoming and internationally recognized and respected superstar, and lastly his battles with alcohol and substance abuse.

It was here that I found the documentary most interesting.  I’m as guilty as the next guy of watching (and sharing) videos of an obviously intoxicated Iron Sheik ranting, raving and threatening any number of people.  I don’t think anyone wants to be B. Brian Blair, or “the Hollywood jabroni Hulk Hogan,” and be in the same room as the Iron Sheik.  What made this piece so interesting was its exposure of how this behaviour has affected his family and personal life.  I often forget that, although to me these men are larger than life superheros, they have families at home, and while I might enjoy seeing the Iron Sheik and his latest rant on YouTube, he has a family at home, and responsibilities to them.  Powerfully spoken pieces from his wife, and lifelong friends and handlers, the Canadian-born Magen boys, really allowed me to put in perspective how difficult it must be to control the uncontrollable, and try to keep the Sheik from his own self-destruction, as many of his peers have suffered in the past.  Page Magen was also introduced as one of the Iron Sheik’s lifelong family friend, and more recently his manager.  He and his twin brother Jian are responsible for the Iron Sheik’s Twitter feed, which has absolutely exploded in popularity, and has completely revived the Iron Sheik’s career, possibly saving his life. The brothers watch over the aging Sheik with both love and respect for their childhood hero.

As the movie rolled to a close, and the Iron Sheik received a rounding standing ovation from all in attendance, including a prolonged “Sheik! Sheik! Sheik!” chant.  Page Magen reintroduced us to the Sheik, and opened the floor to questions.  The Iron Sheik was, himself, very humble in answering fan questions, and riled the crowd up a number of times with a borrowed-from-Stone-Cold “Give me hell yeah!” 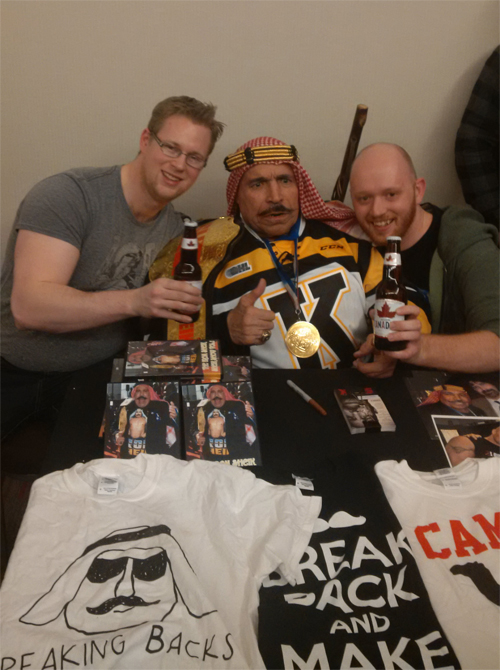 Left to right: Nic, The Iron Sheik, and myself. Photo Credit: Justin Cousineau

My friend Nic, and I took the opportunity to have our picture taken with the Sheik, as well.  He was very gracious, even offering Nic and I one of the beer he had with him on the table (which, we of course, declined, offering to purchase one for him, instead, as thanks for the years of entertainment).  This is the picture we managed to snap.

In all, the Iron Sheik documentary, and private question-and-answer session was an incredibly humbling experience.  Although I didn’t think it was possible, I have a newfound respect for the Iron Sheik, both man and performer.  If you are ever given the opportunity to see one of these private screenings, I cannot recommend it highly enough.  They are a once-in-a-lifetime opportunity that you will sorely regret passing up. 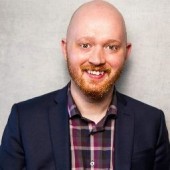