Malia Hosaka’s career was off the beaten path

Malia Hosaka has spent the past 25 years traveling the world — wrestling for multiple promotions, entertaining the troops and racking up championships and respect from fellow competitors along the way. And, according to Hosaka, she did it all without Vince McMahon or WCW. 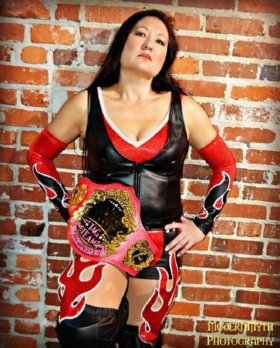 For those efforts, the Cauliflower Alley Club will honor Hosaka with a women’s wrestling award during its 50th anniversary reunion April 13-15 in Las Vegas.

Hosaka, whose career began in the late 1980s, said McMahon never gave her “the time of day.” WCW didn’t give her a chance. And she always seemed to enter a promotion during transition periods in the women’s divisions.

However, she said her career is defined by that WWE moment in 1999 — the night she was told to pose as a fan and challenge Ivory. Hosaka said she did “what they wanted me to do” and that she was told nobody would recognize her because she had never been on a WWE show.

“I should’ve said my moniker at this point — If you can’t wrestle, keep your tits and ass out of the ring,” Hosaka said. “I think that was really a definitive point … I had an opportunity to stand up and speak up, but rather than rocking the boat (I did what I was told).”

Shortly after that endeavor, which never brought about a solid storyline, she was released from her contract and returned to the independent scene.

In spite of being “overlooked by the major companies,” Leilani Kai said Hosaka “truly deserves” the women’s wrestling award.

“Malia is known worldwide and while WCW and WWF have both used her, neither really gave her the opportunity to be the star I knew her to be in the ring,” said Kai, who has known Hosaka for nearly 30 years. “She has a name because of her abilities, not because of her TV time, and she has the talent and ability to work with anyone and make them look like a star.”

Karl Lauer, CAC executive vice president, contacted Hosaka last fall, saying he was “very interested” in nominating her for the award. Hosaka said she was initially “flabbergasted” at the suggestion.

“My career’s not one that people have looked at and said it’s any great magnitude,” said Hosaka, a former NWA Woman’s World Champion.

But Lexie Fyfe, Hosaka’s The Experience tag partner in SHIMMER, said Hosaka helped change the dynamics for women when she took on a mentor-type role. That mentorship was cemented for Fyfe when SHIMMER’s Dave Prazak put the two together in Fyfe’s first tag team situation of her career. Hosaka gave Fyfe pointers on the psychology of tag team wrestling. And psychology, Fyfe said, is one of Hosaka’s fortes, whether she’s trying to make the crowd love her or hate her.

“She knows how to get the crowd where she wants them to be. There are very few heels out there nowadays that are actually a heel,” Fyfe said. “They’ll do the cool moves, try to get themselves over with the crowd. I don’t think that’s a heel’s job. The heel’s job is to be the bad guy and she’s so good at that.”

Hosaka’s list of accomplishments and accolades also includes Armed Forces entertainer. Her first tour in 2000 took her to the South Pacific and lasted six weeks.

Master Sergeant Ramon Ramirez, one of the men stationed on Johnson Island during that tour, said Hosaka was authentic in her conversations with the troops and “really made an effort” to ensure everyone got a photo or autograph.

“She really sparkled when she did that,” Ramirez said. “She put a smile on everybody’s face.”

Ramirez said it was nice to feel the appreciation from those who put on the wrestling shows, which increased morale “dramatically.”

“We get lost in our routine. Sometimes we lose track of not having as much fun as you’d like, (and that) makes the tour that much longer. When something like (a wrestling show) comes across … it makes the time go buy, makes you a little less aware you’re hundreds (of) miles from home.”

“To see these young kids that were 18 years old standing guard in the middle of the night, it was surreal, I guess,” Hosaka said. “It broke my heart, but filled me with this great big hug sense of overwhelming appreciation for what they do for us.”

As she continues to entertain the troops and tackle the independent scene, what began as an “I-told-you-so-endeavor” to prove to her father — a big wrestling fan — that anyone could be in the business, has turned into a quarter-century career Hosaka characterized as a circus.

“It shaped who I became. I entered wrestling, I was shy, didn’t have a lot of self-esteem. I was very unsure of who I was,” Hosaka said. “I went from young adulthood all the way into my later in life. It helped me to find myself and teach me character … It was running away and joining the circus.”