Knowing my love of all things pro wrestling, a friend of my father’s recently sent along an older book, Me by Jimmy (Big Boy) Valente by American satirist Garrison Keillor. It came out in 1999, appropriately enough, at the height of fame for Jesse “The Governor” Ventura.

Remember him? He was once relevant as Governor of Minnesota. 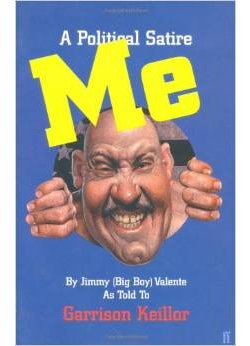 Keillor’s fictional creation, Jimmy (Big Boy) Valente, is essentially Ventura with the volume turned up even higher — if that’s possible.

Valente dictates his life story to Keillor, who is a public radio darling in the U.S., and the author of a ton of books. (He also happens to be a Minnesotan, so he lived through the wild ride of Ventura.) The back-and-forth asides with Big Boy complaining about the liberalness, and general wimpyness, of the writer himself, are some of the highlights of Me.

We start with the adopted Valente in his early days, high school, and then in to the WALRUS arm of the United States military. It’s while stationed in Vietnam that Valente really steps into his own, and acquires a life-long friend/nemesis in The Rodent.Returning from the war, Valente falls into professional wrestling in Alaska and it grows from there.

Instead of “just” being “The Body” as a wrestler and a commentator, Valente becomes a Vince McMahon-like promoter, running the largest wrestling promotion in the world and making oodles of dough in the process.

The decision of Valente to become a small-time mayor and then later run for governor mirror Ventura perfectly though.

The book in its entirety is quite a joyful romp, ridiculous in its allusions to reality. Knowing what we know now, that Ventura was a one-trick pony who devolved from mainstream politician to crackpot on the media’s fringes, it’s a particular type of look into the past.

“I’m taking over wrestling. Forget about the competition. Join me or find another line of work,” Valente says at one point just before doing just as he promised.The wrestlers that Keillor comes up with are pretty awesome — Vicious Eddie the Mohawk Kid, Hump Hooley, Mr. Disaster (with “weird hair like he had reached puberty near a nuclear power plant”), and Dave the Postal Worker.

But even better, he amps up the violence, making wrestling shows closer to action Hollywood blockbusters, with guided missiles as important to the plot points as the pre-bout ballyhoo.

At the time, I can see how this would have been a great read, especially for those who found such humour in Ventura becoming governor. Now 15 years later, it doesn’t seem dated, exactly, but more of an anachronism, a book out of time.