Tales from the NWA President: Blizzards and meeting Jushin Liger

The first time I met the legend Jushin “Thunder” Liger was in 2013 in Kobe, Japan. Actually I had most likely met him on an earlier date, as I made my way through the Japanese dressing room shaking everyone’s hand. I just didn’t recognize him without his mask.

And of course when I shook his hand on that earlier forgotten date, he didn’t introduce himself as, “Nice to meet you. I’m Jushin Liger!” It actually took me a couple of trips to figure out who he was.

I was actually looking for him on my earliest trips to Japan. Without trying to be too obvious. Because even though I do consider myself a professional in this business of professional wrestling, I am also a fan — and I always will be. And I have always been a fan of Jushin “Thunder” Liger.

On my first trip to Japan with NWA World Heavyweight Champion “Ironman” Rob Conway, he was matched up against Satoshi Kojima in Tokyo. On our second event in Japan, Rob was paired off against Nakanishi in Osaka. And then his third match was announced for Kobe, Japan, and his opponent was announced as THE LEGEND Jushin “Thunder” Liger! Both Rob and I were both excited to be in the ring with as high-profile a competitor as this — in a feature match — on an international pay-per-view. 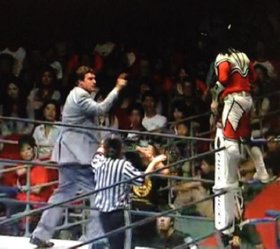 When we first met with Mr. Liger in the dressing room, while very polite, he spoke very little English. And although he treated us both with great respect, it was HE who we felt deserved the respect on this evening, for his years in the business, and his international accomplishments. It was truly an honor for us to be in the ring with Jushin Liger on this night and we wanted him to know it.

As we went over the match, it became clear that Rob and Liger had great chemistry. This was confirmed once the bell rang. The roar from the crowd of 12,000-plus in attendance live was a testament to the popularity of Jushin “Thunder” Liger. The crowd desperately wanted their favorite to win the match and defeat the evil American champion.

The match went approximately 12 minutes with Liger in control for most of the contest. But when Liger climbed to the top rope, the NWA President sprang into action. I had to distract Liger long enough for Rob to gain his second wind. What I didn’t anticipate was Liger following me off the apron and onto the floor, where he stiff armed me in the chest causing me to tumble backwards head over heels — to the delight of the Japanese crowd.

The bruising to my posterior, and my ego for sure, was worth it because this brief distraction on the arena floor allowed “the Ironman” to lock Jushin Liger into the “Ego Trip Neckbreaker” for the win. But the match with Liger was a great memory we will never forget. And despite the loss, Liger seemed pleased with the match and the reaction of the audience.

It’s not always winning or losing that matters, but that if the competitors worked together to present a match that audience enjoyed. The competitors succeeded in this match.

Ironically, Satoshi Kojima had been scheduled to travel to the U.S. to compete later that month, but injured himself in Kobe and was unable to travel. So on the New Japan bus, trying to figure out a replacement, I casually pointed at Liger and asked, “What about that guy?” And Jushin Liger was booked to the United States as easily as that!

The week that we spent in Texas with Jushin Liger, Tenzan, Tiger Hattori, and Gedo, was amazing. But the details of that trip will be left for another column. I will say that the week began with us picking them up from the airport, and almost immediately taking them to the Texas RoadHouse for thick, juicy steaks and cold draft beer. Needless to say we started that trip off on the right foot and shared some great experiences with our Japanese colleagues.

The blizzard I experienced in Japan took place in February 2014, and my traveling companions on this occasion were Michael Tarver and “Big Daddy Yum Yum” Byron Wilcott. The flight began early as it almost always does, departing before 6:00 a.m. on a flight to Dallas. When I arrived there it was snowing.

After a six-hour delay (not fun when you’re facing a 14-hour nonstop international flight) we boarded the plane to Tokyo. Calculations meant we were already looking at a 20-hour travel day. They began to de-ice the wings with this yellow chemical that started emitting an odor hat seeped into the plane. Finally, with some trepidation as I had never before been through the deicing procedure, we took off, got above the clouds to 40,000 feet, leaving the snow behind, and headed toward Tokyo. 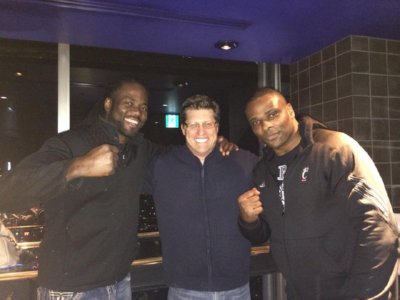 Wilcott met me in the lobby and he looked tired! The first trip to Japan is always an experience, but as has become tradition for me, I get together for dinner on the first night with my wrestlers to talk about Japan, their upcoming match, and what to expect. My good friend Koichi Suenaga always joins us. Tarver, Wilcott and I had a great meal at my favorite Korean BBQ Restaurant next to the Tokyo Dome. We drank some cold beer … and went to sleep. We had to meet the New Japan bus in the morning for the trip to Hiroshima.

As they say in Japan — and what new wrestlers learn quickly — EARLY is “on time” — and “on time” is LATE! So when the Japanese tell you to be on the bus at 9:00 a.m. that really means 8:30 a.m.! So you pack the night before so when the alarm goes off you only have to brush your teeth, grab your bag, and get to the bus.

We were on the bus at 8:30 a.m. watching the snow fall outside the windows. It was beautiful. But as we drove farther outside Tokyo toward Hiroshima the snow started falling harder! We saw cars stopping alongside the highway — but the New Japan bus kept going. The snow started falling harder, and the wind started blowing harder, and then it was freezing rain mixed with it all.

It would have been kind of scary, but I wasn’t driving! And actually it was kind of fun making that kind of trip in a bus-full of wrestlers all cracking jokes.

Every time we stopped for gas we would run through the snow and freezing rain — blowing sideways in this freezing wind — to make it inside these Japanese convenience stores to buy food and use the restrooms. The food inside these convenience stores is great compared to those in the U.S. They have hot food cooked fresh in restaurants where you order plates by the number.

But the hard part is that the public restrooms are unheated. That’s a challenge. And I thought Japanese-style toilets were difficult.

The blizzard was an experience, but it turned what should have been an eight-hour bus trip into a grueling 14-hour trip. We left the Tokyo Dome at 9:00 a.m. and pulled into our hotel in Hiroshima at 11:00 p.m that night. We barely had time to find some food before crashing into our beds. Next day we wrestle.

The one thing I have learned about Japan is that inclement weather does not discourage attendance. I have seen 15,000 diehard Japanese fans with umbrellas watch the G-1 Finals in the middle of a typhoon. There was heavy snow in and around Hiroshima, but the arena was sold out, with 10,000-plus people ready to see New Japan Pro Wrestling.

The first night in Hiroshima Tarver had a singles match against Tenzan and Wilcott had a singles match against the newly-crowned NWA World Champion Satoshi Kojima. Despite Tarver accidentally busting Tenzan open the hardway causing him to need 20 stitches put in above his eyebrow, both American wrestlers made an impressive debut. In Osaka, Tarver and Wilcott faced Ten Cozy as a tag-team.

The next day before we left for Osaka, I made it a point to visit the Peace Park, ground zero where one of the two atomic bombs had struck Japan to end World War II. Years ago, James J. Dillon had told me of visiting this same location on a tour with Blackjack Lanza and what a sobering experience it was for him. He was right. On this cold February morning I was the lone gaijin on my knees praying for those innocent souls that had lost their lives because of war. An obsolete form of diplomacy in my opinion, to say the least. I am so thankful that Japan and the United States are friends now — in everywhere except the wrestling ring.

Bruce Tharpe is an attorney and is President of the National Wrestling Alliance. He has been in the wrestling profession all his life having been “born into the business” in Florida where his father worked for Eddie Graham. Tharpe is currently a character on television in Japan and has been a regular member of the roster in New Japan for almost two years. During that time he has made 12 trips to Japan and two tours of Taiwan. He continues to direct the development of the NWA as a brand worldwide.