Tales from the NWA President: Our first trip to Japan

We were apprehensive on that first trip to Japan. Even though we had met with New Japan Pro Wrestling officials in Dallas and New York City to discuss details of the first NWA World Heavyweight Title defense in New Japan Pro Wrestling in many years, the feeling of apprehension was still there. We were very new at the helm of the National Wrestling Alliance and holding the position of President still seemed a bit strange. Would there be a double-cross for the belt? An in-ring shoot? We had to be ready for anything. Especially in a foreign country.

“Godzilla” Jax Dane accompanied “Ironman” Rob Conway and myself on that first trip to Japan, but he served a very real purpose for us in addition to working ringside. At 6-foot-6, and 320 pounds of chiseled muscle, Jax Dane was our secret weapon in case anything went wrong. 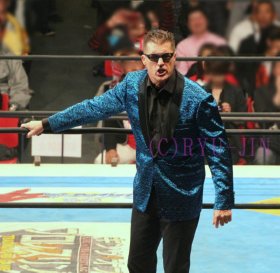 The colourful Bruce Tharpe in Japan. Photo by Ryu-Jin

Since we all took separate flights, but arrived around the same time, we met up in the arrival lounge. We arrived on April 5, 2013, and were met at Narita Airport by New Japan Pro Wrestling officials who immediately whisked us off to the Tokyo Dome Hotel, where we were to stay for the next few days. Upon arrival we were all given a written agenda that explained to us the schedule of events — where were expected to be and at what time.

The hotel is about an hour and a half from the airport and is situated next door to the famed Tokyo Dome Arena. On the other side of the Tokyo Dome Hotel is Korakuen Hall where most of the Japanese wrestling promotions shoot TV. When we got to the hotel we saw a few familiar faces, but mostly we had new acquaintances to make.

After a quick dinner, we all knocked out about midnight because of the long and grueling plane ride. How surprising to find out that I woke up four hours later, at about 4:00 a.m., wide awake and with nothing to do. My first experience with jet lag! (Actually my second — but that story will come later.) You’ve never experienced Japan until you find yourself wide awake in the middle of the night with jet lag — with nothing to do — and there are only about three or four channels on the television, all in Japanese!

On April 6, 2013, the second night of the tour, we did television at Korakuen Hall. This was the night where we met all of the Japanese wrestlers. Yes we were a bit apprehensive walking into a new dressing room — in a foreign country on the opposite side of the world, where they spoke a different language — and this was NEW JAPAN PRO WRESTLING! But we were made to feel comfortable and at ease immediately and shook hands with everyone, introducing ourselves.

Up to this time, the Japanese public had seen videotaped interviews that we had sent from the United States, but this was the first time that we had appeared live in a Japanese wrestling ring. I must admit that when we parted the curtain and entered that ring with the New Japan logo it was a surreal experience. Here we were in Tokyo, Japan — on television, with New Japan Pro Wrestling — about to participate in one of the biggest matches of our lives.

We spoke to the crowd and told them why we were confident that the NWA would defeat all challengers that New Japan put against us. That is the first time that we heard boos from the generally mild-mannered Japanese wrestling fans — and realized that we had hit on something. I did not plan on becoming a heel character / in-ring manager for New Japan Pro Wrestling; the fans created that with their reaction to us. 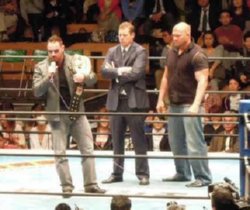 Rob Conway with his muscle, Jax Dane, and his manager, Bruce Tharpe.

We challenged anyone to face the NWA World Heavyweight Champion “Ironman” Rob Conway — and the challenge was accepted by Satoshi Kojima. The match was scheduled for the next night at Ryogokan Arena in Tokyo, known commonly as the Sumo Hall the historic arena where the big sumo tournaments are held.

We took the New Japan bus to the arena and when we arrived there were literally thousands of fans waiting outside the arena. The event had long been sold out with more than 10,000 fans in attendance live — and there were many more waiting outside hoping to get a ticket or catch a glimpse of their favorite wrestler as he made his way into the arena.

What immediately struck me was the television setup — it was amazing! The lighting, the entrances, the special effects … The merchandise setup was another amazing observation. The Japanese are so organized. The same guy who drove the New Japan bus with the gaijin (foreign) wrestlers handled the merchandise. Another guy who drove the bus with the Japanese wrestlers also refereed. The head referee, Tiger Hattori, also is the liaison between the gaijin wrestlers and the New Japan office. 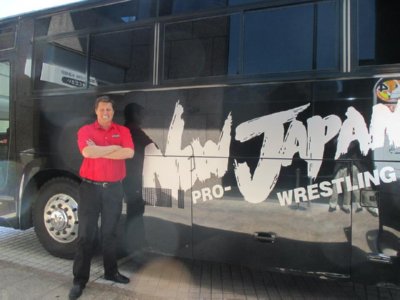 Get on the bus, Bruce!

Again, just like the previous night a Korakuen Hall, all of the matches were amazing. The style is so fast-paced, hard-hitting and realistic that invariably someone always gets hurt legitimately on a New Japan pay-per-view event. The stakes to outperform your peers are just that high. That’s where the REAL competitiveness exists in professional wrestling — to have a better match and impress the fans more than anyone else on the card.

While watching this event on the monitor in the dressing room, I saw Yuji Nagata dislocate Sakuraba’s elbow in the middle of the match as he worked a stiff armbar and Sakuraba was trying to escape. It looked ugly. But injuries such as these are part of wrestling. The entire dressing room let out a collective groan of anguish as we saw this unfold before us on television — and the Japanese trainers and doctors sprinted to the ring.

They reset Sakuraba’s elbow and snapped it back into place right in the ring. That’s right. You can see it for yourself on YouTube. The match paused briefly. The doctors and trainers rolled in the ring, reset Sakuraba’s elbow, and taped an ice pack to it. Then Sakuraba and the trainers rolled out of the ring and the match continued and Nagata went into the finish with Sakuraba’s partner (it was a tag match). Sakuraba-san has to be one of the toughest men I have ever met in my entire life.

The music hit announcing the NWA World Title and I made my way to the ring. Surprisingly, I was met by a chorus of boos. Apparently the Japanese fans didn’t want to see the American NWA champion defeat their hometown challenger. Basic wrestling psychology worked.

Conway and Kojima had a very good match in which the NWA title was successfully defended. New Japan seemed to be genuinely pleased with the match and the crowd reaction. We were invited back for another tour. 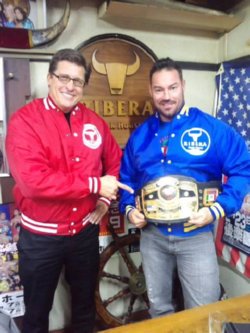 Bruce Tharpe and the NWA World chamion Rob Conway head out for dinner.

It is now November 2014 and collectively Rob Conway and I have been back to Japan close to 20 times either together or separately. And one of those tours was to Taiwan. The relationship between the NWA and New Japan Pro Wrestling has proven to be a fruitful one. New Japan has booked NWA talent into Japan — and New Japan talent have come to the United States to participate in NWA events in Houston, San Antonio, Nashville and Las Vegas.

The NWA President character in Japan has developed into a heel that wears flashy jackets and sunglasses to match. I openly insult the Japanese on television in their native language, talk about the NWA wrestlers’ superiority over the Japanese and challenge any Japanese wrestler to prove otherwise.

Despite the on-screen persona, I have come to love Japan. After so many long flights it doesn’t bother me anymore. I am used to the jet lag. And I have immersed myself in the Japanese culture and eaten a lot of foods I would never have eaten in the U.S., like live shrimp, raw horse meat, and a lot of raw fish! I have come to really love working and traveling in Japan — and can’t wait for our next trip!

Bruce Tharpe is an attorney and is President of the National Wrestling Alliance. He has been in the wrestling profession all his life having been “born into the business” in Florida where his father worked for Eddie Graham. Tharpe is currently a character on television in Japan and has been a regular member of the roster in New Japan for almost two years. During that time he has made 12 trips to Japan and two tours of Taiwan. He continues to direct the development of the NWA as a brand worldwide.