By DAVID MURO – For SLAM! Wrestling

Every young man eventually finds a hero to look up to, someone to be like, someone to represent themselves. Some admire Batman, Superman, Michael Jordan, Wayne Gretzky. Some are fictional characters, and others are real people. Perhaps what makes “Macho Man” Randy Savage so special is that he is both.

Savage has been in the news recently as the first announced inductee into the WWE Hall of Fame, with the ceremony set for late March in San Jose, Calif.

He had it all: A memorable image, with his cowboy hats and boots, bandannas, big shiny sunglasses, and colourful spandex; Beauty by his side; The indulgent “Pomp and Circumstance” theme music; and the most important part — that voice! 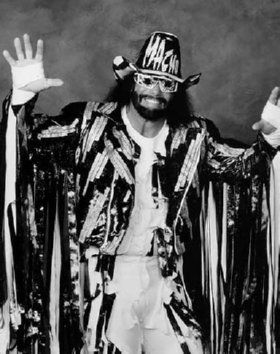 These ingredients have created what I believe to be the most famous professional wrestler of all time.

He was Randy Poffo, son of pro wrestler, Angelo Poffo, but would leave this world in May 2011 as wrestling legend Randy Savage.

As a youngster, I would always walk to the video store to rent a few WWF home videos. Most of the time, they were classics like the Royal Rumbles, Summerslams, Survivor Series, and of course, the Wrestlemanias.

The title that my brothers and I most frequently rented was Wrestlemania V. It was headlined by the two biggest names to date: the challenger Hulk Hogan and the WWF World champion Randy Savage.

The match had been built up so well. They were once the ultimate duo, the Mega Powers, broken up by controversy. Savage had been accusing Hogan of being flirtatious with his then-wife, Ms. Elizabeth. This lead to an angry Savage attacking the ultimate good guy, the Hulkster. I remember it like it was yesterday. The Number One hero facing off against the big time villain. Hogan came out on top, but Savage gave him a hell of a match.

Acting out this amazing story with my siblings, while watching it unfold became a highlight of my childhood. The story was told so well, even those who were not wrestling fans couldn’t help but get caught up in the anticipation.

The professionalism, storytelling, and performance were nothing less than five-star quality, at least to my young mind.

I will always remember Savage as a professional and a master of his craft, someone who really loved his character through every single breathing moment of his career.

I also appreciated that he was considered one of the smaller wrestlers during a time of muscles and hyper-masculinity. But he could still compete, and tough it out, with any giant that stood in his way. If anything, he only moved around the ring faster, making him that much better. Good guy or bad guy, you watched that screen and could not take your eyes off that wacky, funky, out of control, character.

The promos he gave on the mic were so cutting edge. His funny mannerisms along with his facial expressions, and most memorably that voice! Whether or not you understood, you believed what he said because he believed in himself.

Yes, sometimes his interviews were so out of this world, you had to laugh. Nerveless, it was always entertainment at its best. I mean, who hasn’t stood once or twice in front of a mirror, with your hands to the side of your head belting out “OHHH YEAAA, DIG IT!”

Most famously, he endorsed Slim Jim. We never had those in Canada, but man did he ever sell it! To this day, every time I go to the United States and see a yellow packaged Slim Jim meat stick near the cash register, I can’t help but say, “Snap into a Slim Jim!”

Sadly, on May 20, 2011, I read the headline “Randy Savage dies in car accident.” I’ll always remember: the man of the hour; too sweet to be sour, funky like a monkey. Too cold to hold, too hot handle. The cream rises to the top!

I found out later on that he really was a good-spirited man. He even gave his time to charities.

For many years the WWE Hall of Fame inexplicably neglected the Macho One. But, bad blood or not, everyone knew he would eventually have to be inducted.

Savage had already been inducted into the prestigious Professional Wrestling Hall Of Fame in 2009, where all the greats go to be honored, regardless of backstage politics. Still, the fans clamoured for him to be recognized by the WWE as well.

I am so happy and excited to know that he will be a part of the WWE Hall of Fame Class of 2015.

The Madness will live on forever. Dig it!

David Muro has been a wrestling fan since he was born (1986) in the ragin’ 1980s WWF era. He has spent all his life studying and worshiping sports entertainment, from recording episodes of Raw back in the VHS days, to attending every WWE live event — and, of course, being a loyal follower to SLAM! Wrestling since 1997!