Skullion hoping Mighty Mini’s are the next big thing

To anyone who’s ever seen Toronto’s hardcore icon Bill Skullion covered in blood after competing in a death match, picturing him talking business in a high-rise tower in the heart of the city’s financial district would be a shock. But that’s indeed where he met up with SLAM! Wrestling to talk about his newest venture, Mighty Mini’s Wrestling, which will be putting on a match as part of this Sunday’s Destiny Wrestling show.

“A lot of people think I’m trying to run full midget wrestling shows,” Skullion said about the concept of Mighty Mini’s. “That isn’t what I’m trying to do. Rather, what I’m doing is putting together a group of little people wrestlers, and hiring them out to existing promoters who want to add a special attraction — of good quality, little people wrestling — to their shows.” 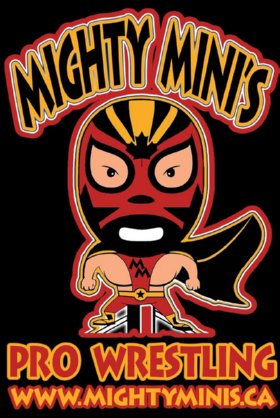 The recruiting of talent that can deliver good quality matches is factor that Skullion feels is truly a differentiating factor.

“Some promoters will bring in little people and then have them wrestle against the big guys, and it’s almost treated like a joke. That’s kind of messed up. I’d rather, if they want to book little people, book two of them and let them have a good quality match, rather than just be there as a rib.”

To that end, Skullion is carefully selecting a roster that are there for all the right reasons, and are interested in building up the brand, as opposed to driving their own personal agendas.

“That’s the biggest challenge,” he explained. “To build a steady, loyal team where everybody is on the same page. We need to be able to count on each other to go after the same end goal. Building a roster is easy — finding guys that are going to be team players and all work as one unit, that’s the difficult part.”

That said, he knows that the roster he’s assembled so far fits that bill. Fans will get to see two of them in their debut this Sunday, where Pepper Jack and Kid Canuck will be squaring off in a match on the Destiny Wrestling show.

Both wrestlers come from strong pedigrees: Pepper Jack’s uncle was himself a wrestler named Little John, and Kid Canuck’s grandfather was the legendary Major Tom Thumb.

While Pepper Jack is a veteran of the sport (“I’ve been involved for many years — I even wrestled Bill some time ago”), Canuck is brand new to the business. To get him up to speed, he’s been training for the past month. 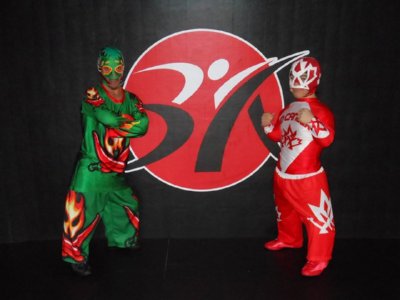 “We actually weren’t planning on having our first match until March or April,” Skullion said, “but we were training at the Battle Arts Academy, and got connected with (Destiny promoter) George Theiceman who invited us to do a match on the show. It’s a really good fit for his show, because what we do is 100% family friendly.”

Again, hearing that kind of thing from Skullion, whose matches as “Bloody” Bill were more Manson Family than family-friendly. Though they actually reflect on the actual man behind the character.

“Yeah,” he acknowledged, “this is the exact opposite of what I’ve been doing for the past 20 years. But (the ‘Bloody’ Bill persona) was 90% a work. It’s just that I’m old-school; so when I went out of the house, I went out as ‘Bloody’ Bill. And that can get to you after a while … you almost forget who you really are. I’m so much happier doing this instead of being angry 24 hours a day (living in character). I feel like a big weight has been lifted from my shoulders.”

“Don’t get me wrong,” he qualified, “I can still handle myself, and I can knock out a mofo if I have to. But I’d much rather stay at home and play with my dogs, or go to a club and hang out.”

Or continuing the positive outreach work he’s been doing with kids for years, both teaching wrestling to kids on native reserves, and visiting schools to hold anti-bullying awareness presentations.

“I know it’s hard to believe because of (how I look now), but as a kid, I’d get bullied at school — I know what that’s all about. And then being on the road for so many years with (little people) Farmer Pete and Frenchy Lamonte, I’ve seen a lot of guys mess with them — promoters who would just book them against big guys and stuff. You wouldn’t think it if you saw us standing side-by-side, but I have a lot in common with these guys in a lot of ways. So starting in the next school year, during the weeks, we’ll be doing anti-bullying presentations in schools. Little people wrestling can be a great inspirational message — it’s very empowering for them, and I want to help them get that message out.”

In the meantime, Skullion will be continuing to recruit and train new talent and hook up with more companies (“we hooked up with Classic Championship Wrestling to have matches on about 40 to 50 of the county fair shows that they run between May and October”), in an effort to turn Mighty Mini’s into the next big thing.