Irvin Muchnick, an occasional contributor to SLAM! Wrestling, has a new book out. It’s called CONCUSSION INC.: The End of Football As We Know It. There are some natural ties in it to professional wrestling, of course, including Chris Nowinski, so we are pleased to present the introduction to the book for you today.

In the summer of 2011, I changed the name of my blog from Wrestling Babylon to Concussion Inc. This reflected the latest tweak of an oeuvre whose continuous thread is: if pro wrestling is as fake as everyone says,then what are we supposed to make of the rest of the world, which never ceases to imitate it? Epistemological angels have danced on the heads of thinner pins. 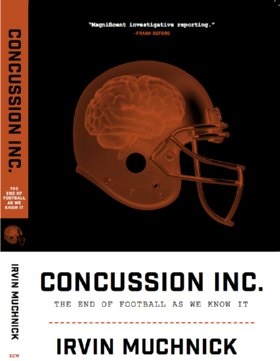 Wrestling Babylon was also the title of my too-long-marinating collection of articles for mostly mainstream publications about behind–the-scenes maneuvering and scandal in an industry that graduated in the 1980s from territorial mafia to international brand, thanks to the emergence of cable TV; a burst of rampant, made-in-America deregulation; and late-empire cultural devolution. The latter was the stuff of Edward Gibbon. Turns out that global hegemony isn’t as easy on the old collective psyche as it looks.

A few people, some of them wearing thick eyeglasses, took my thesis as seriously as I did. Vince McMahon watched (or directed) his wife, Linda, in two wildly expensive and unsuccessful runs for a United States Senate seat from Connecticut. For presidential aspirants, a skit on Raw became as obligatory as televised debates. And one of the most quoted gurus on the newly risen issue of traumatic brain injury in sports — as well as one of the most successful profiteers therefrom — was the medical director of WWE.

In short, Concussion Inc. was the right cliché at the right time.You’ve heard of Fast Food Nation, Steroid Nation, Murder Inc.? (Plus, perhaps, the Green Day rock album and Broadway operetta American Idiot?) Concussion Inc. became a nod to the notion first formulated in Horse Feathers by Groucho Marx, who longed for the Huxley College football team to finally get a school it could be proud of. Not since the surgeon general’s report on the dangers of cigarette smoking in 1964 had American corporatocracy found a public health crisis so worthy of its capacity to equivocate, rationalize, delay, and deny.As I confessed in the revised introduction to my second book, Chris & Nancy: The True Story of the Benoit Murder-Suicide and Pro Wrestling’s Cocktail of Death, I gave too much weight to drug abuse and too little to concussion syndrome, in the immediate postmortem of that tragedy. By the time Chris Benoit committed his heinous crimes in 2007, Dr. Bennet Omalu, a Nigerian-born forensic pathologist who had the fatal flaw of being beholden to no old boys’ network, already had begun finding accumulations of tau protein in his brain autopsies of prematurely dead Pittsburgh Steelers. Omalu labeled as “chronic traumatic encephalopathy,” or CTE, the associated phenomenon of depression, loss of impulse control, and dementia, which was consistent with similar findings of early neurocognitive decline in boxers going back to the 1920s.

Omalu’s Benoit study, released three months after the horrific incident in Georgia in 2007, was the first under the auspices of the Sports Legacy Institute. That group was started by Chris Nowinski, proud holder of the American elite trifecta: Harvard education, WWE superstardom, traumatic brain-injury author-activist.

From there, things only got better — or worse, depending on your perspective — in the person of Dr. Joseph Maroon, a neurosurgeon whose patient list spanned all the way from the Saudi royal family to wrestling legend Bruno Sammartino. Maroon was an aging anti-aging huckster whose University of Pittsburgh Medical Center colleagues, at minimum, were linked to the steroid and human growth hormone use of the six-time Super Bowl champion Pittsburgh Steelers — a team paid by its doctors for the right to advertise themselves as its official sports-medicine practitioners.

Maroon lied about the back story of Steeler Terry Long’s suicide. Maroon lied about his and WWE’s access to Omalu’s Chris Benoit brain study. Maroon and his co-physician entrepreneurs in the Steel City (where health care was the main post-industrial employment growth center) played fast and loose with facts on the efficacy and standards of their ImPACT “concussion management system,” which one state’s laws after another’s gradually foisted on public high school football programs in order to appear to be doing something . . . anything . . . to counteract the systematic braining of young American males. Maroon fudged his relationship with a helmet manufacturers’ borderline-fraudulent study — the latest in the serial scientific book-cooking in which he engaged for more than a decade as a member of the National Football League’s head-injury advisory committee. Joe Maroon was the white coat who put the Inc. in Concussion Inc.

As my rebranded blog took off, many readers tried to cast me as some sort of concussion cop, but that was never my purpose. Wisely or not, I even somewhat resisted the temptation to expand my scope into sports other than football, and especially into female athletes (even though there is credible evidence that comparatively innocuous actions like soccer heading are also quite dangerous, and that girls and women are more susceptible to concussions than boys and men). All along, I wanted to stick to two basic points:

* Like boxing — and unlike soccer, cheerleading, and overly vigorous tooth-flossing — football is uniquely and even intentionally a blood sport. Traumatic brain injury is not incidental but central. Further, the NFL is a $10-billion-a-year industry with a footprint on our culture that long ago passed beyond “out of control.” On the 1 to 11 scale of the guitarist’s amp in This Is Spinal Tap, football is a 12.

* Purported corrective measures should be viewed with deep suspicion. The alignment of the money forces makes it far likelier that “solutions” are self-serving cottage industries rather than of genuine public health net benefit.

By no means do I claim to be on the ground floor of any of these insights. Robert Lipsyte, whose keyboard I can’t even carry, was on to the trap of what he dubbed “SportsWorld” decades ago. Matt Chaney, a little-known author in Missouri, has exhaustively documented the cycles of death and hocus-pocus safety measures in American football; his research gives much of the credit for this persistent national delusion to the successive rise of, first, rotogravure Sunday newspaper magazines, then radio and television. By comparison, your humble blogger was and is a sociological bottom feeder — a mere investigative reporter/social critic with perspectives not found much elsewhere.

No, ground floor was Chris Nowinski. Ground floor was Alan Schwarz of The New York Times. Compelled, like a ball-hawking free safety, to the infliction of equal-opportunity offense, I’ve alternated praise and criticism of those two worthies: praise of their prescience and basic accuracy; criticism of the Nowinski group’s ill-advised decision to accept a $1 million NFL grant and of Schwarz’s naive reporting of developments flowing from the NFL’s new and responsible age of “concussion awareness.” (In the fall of 2013, Nowinski reprised the whole process with his old employer, WWE — trading a seven-figure research grant commitment for a Sports Legacy Institute award for corporate responsibility. The honor is known, inappropriately enough, as the “Impact” award.)With respect to Nowinski in particular, I do appreciate that he has a more intense relationship with the football industry than I do, that he is more emotionally invested in the goal of “saving the sport from itself ” than I’ll ever be, and that he works on the front lines — with professional players and with the star-struck kids and parents for whom the pros are the most wobbly of role models.

In the end, the Concussion Inc. blog has been whatever it is. Sensing saturation, I largely moved on to the under-covered scandals of sexual abuse in American club swimming — a subject my collaborator Tim Joyce and I find we have all too much to ourselves. And hey, if I wake up on a Sunday morning determined to wax rhapsodic about Norah Jones’s “Chasing Pirates” or the St. Louis Cardinals’ fire-balling relief pitcher, Trevor Rosenthal (whom I’ve dubbed “the Ashkenazi Express” on Twitter, much to the cringe-inducement of my kids) . . . well, what is the management of ConcussionInc. Net LLP supposed to do about it? Threaten to pay me less than nothing? (Readers of this book should know that neither Norah nor Trevor will be found otherwise herein.)

I hope the format of this book gets across, at the very least, my disinterest in journalistic convention. I organized the content of my daily noodlings into topics. Sometimes I kept original columns intact. Sometimes I cheated, by adapting and rearranging verbiage from multiple posts, in the hope of clarifying what is a retrospective reading experience with an open ending. Continuity or reader conning? You tell me.No jokes, please, about whether the result is evidence of the author’s own early onset dementia. If this modest volume contributes to the documentation of our strange times — when bread and circuses rule, and societal mental health is an afterthought — I’ll be a little happier and a little less dependent on Obamacare.