It was October 5, 1996, when a young, scrawny TJ Wilson teamed with Andrew Picarnic to face Teddy Hart and Harry Smith in an exhibition match to kick off a house show at the Saddledome in Calgary. Now, 18 years later, Tyson Kidd is returning home to Calgary and the arena that he watched his heroes wrestle in and had his first taste of the WWE ring.

It’s part of a brief Western Canada swing, with WWE in Edmonton on January 31 and Calgary on February 1, when Kidd faces R-Truth. 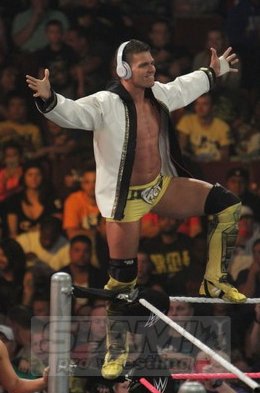 “It is so hard to put that into words. The very first thing I did with WWE was as a 16-year-old kid on a show at the Saddledome. To my knowledge it has never happened before or since and probably never will be duplicated again. The fact that we are still in the Saddledome all these years later, it’s not a new building, it is unimaginable to think about. It is an amazing feeling that I get to come back where it all truly started for me at the Saddledome,” Kidd told SLAM! Wrestling on the line from Hartford. “I am absolutely excited. Nothing beats performing in front of a hometown crowd. The fact that we were just there in July and are back so soon is a real treat. Usually I have to wait 12 to 18 months before I get to compete in front of my home fans. To come back this early even in the cold of February — which I try to avoid, it’s going to be a great day.”

WWE appearances have been sporadic in the last decade. Prior to July 2014 there hadn’t been a house show in Alberta since September 2005, and fans and Alberta-based talent had to wait for a single RAW or Smackdown taping every year. Despite not many appearances at home for the WWE Kidd has made them count and has some special memories.

“We had a tag match with Cody Rhodes and Drew McIntyre (on RAW October 18, 2010). At one point I was in there if you watch it back the people are rumbling so much that the hard cam was shaking which is a very rare thing. It touched me so much. It was a six-minute match or something but the fact that the hard cam was shaking and its such a rare occurrence meant the world to me. The other moment in Calgary would be my match with Trent Baretta (which aired on Superstars on May 14, 2011). We went 16 or 17 minutes to open the show. I wasn’t sure the reaction I would get but those Calgary fans don’t ever forget. I watch that match probably every month or two just once to remind myself and I remember it very clearly.”

Kidd admitted it is challenging to be home for such a brief period. He now resides in Tampa, Florida, with his wife Natalya and with the WWE schedule trips home are hard to come by.

“It is very hard to go in and out so quickly but that is beast that is the WWE is. We hit over 250 shows a year and burn through the calendar. We have the show Saturday in Edmonton, a 1 p.m. show in Calgary and then a flight to Denver for RAW the next night.”

It has been 18 years since WWE’s sole pay-per-view in Calgary, 1997’s Canadian Stampede, and 11 years since Edmonton’s Backlash. Will Alberta ever see another event of its kind? Kidd hopes so.

“The Alberta fans need to be heard. We need to show up in droves and make that noise and spark that fire. It starts with the WWE Universe in Alberta and those of us representing Calgary like myself and Natalya, we all need to ignite that spark.”

The wrestling industries ties to Calgary and Alberta are long and well documented. What fans may not know today is how many current and recent WWE stars have ties to the area. In addition to Kidd and Natalya, the Ascension’s Viktor is a Dungeon graduate while Diva Emma and NXT standout Tyler Breeze both trained with Lance Storm and started wrestling in Alberta. Add on former WWE wrestlers Harry Smith and Jinder Mahal, and Alberta continues to be a proving ground for talent.

“I think it is something that has to carry on. It is entrenched not only in the WWE but the entire industry. When you think how many guys that came through Stampede Wrestling that weren’t associated with the Dungeon like Jake The Snake, Billy Graham and Jushin Liger. Then of course guys like Bret Hart, Owen Hart, Lance Storm, Chris Jericho — we know all those guys. For me to be even a little piece of that is amazing and I am doing my best every single night to keep that tradition going.”

The debut of the Ascension on TV means a great deal to Kidd. His final match in Alberta was against Viktor, who started his career as Apocalypse in Stampede Wrestling. They travelled up and down the Canadian roads together and had many fantastic matches against each other during the early part of their careers. Both trained with Tokyo Joe Diago and toured Japan. That said, Kidd suggests that their paths crossing in the ring may not end well for the Ascension.

“It means a lot because I know of his struggles and past and it is similar to mine. We both competed in a lot of places that weren’t highly publicized so even though you are doing a lot people don’t know about it. You have to keep growing and growing and to see him here is great. Unfortunately for him I am also in a tag team so it is probably for the best for him that our paths don’t cross.”

Kidd is one of the busiest stars in WWE, including his tag team with Cesaro. In addition to TV shows and house shows, he frequently wrestles on NXT tapings and specials as well as the Total Divas reality series. As a wrestler, NXT is a different experience Kidd said.

“The main thing is that everything is taped at Full Sail. It is kind of like competing on home turf every time in terms of the tapings and specials. The main roster travels, I am in Hartford for live Smackdown, then head to Edmonton and Calgary and Denver. It is travel travel travel. NXT is more stationary. Having a chance to work with Dusty Rhodes, he has helped me so much that I can’t even praise how much. The first time I saw him on WWE television in polka dots I never would have thought that guy would be such an influence on my career.”

Being on NXT allows him to lock up with the future of the WWE as well. Four years ago on the independent circuit, or in Japan, Kidd facing the likes of Sami Zayn, Adrian Neville, Hideo Itami or Finn Balor would have had fans salivating. Kidd has repeatedly tore the house down with these men on NXT TV.

“Those guys are unbelievably talented. We really can take nothing away. Just look at my match that aired this week on the WWE Network with Adrian Neville. The guy is phenomenal. It is really cool that they are being bred down there. Add in a guy like Tyler Breeze doesn’t have the publicity, background, or buzz, but is a sleeper — he is the one to keep your eye on.” 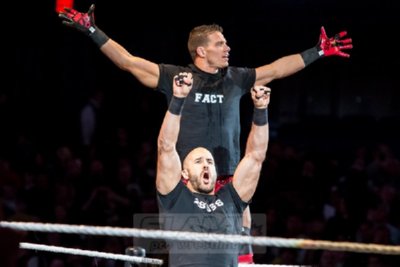 Tyson Kidd and Cesaro are definitely a team on the rise. Photo by Ricky Havlik, RickyHavlik.com

Another wrestler who has helped put NXT stars on the map with great matches is Kidd’s current tag team partner Cesaro, who will also be at the Alberta show. Though not teaming together this weekend, they are coming off a big win over The New Day at the Royal Rumble and Kidd is excited for their team.

“Two guys who are insanely talented, extremely shredded and a lot frustrated come together and decide to make a name for ourselves and show why we are who we are. Cesaro’s story is unbelievable; he won a green card lottery in Switzerland and now here he is. The man is a freak. He can clean and jerk 135 pounds with one arm. He is a freak in every sense of the word. Throw in the best guy pound for pound in the business as his tag team partner and I think our upside is limitless.”

Having TV cameras as part of his life is something Kidd has adjusted to. On Total Divas he has gotten married, shared a tour bus, suffered through the grief over the loss of his cat Gizmo, and fought with Nattie, all caught on film and aired for the world to see.

“It is kind of like anything where it takes some time to get used to having cameras around you all the time. Now it isn’t so much putting on a front you are just letting yourself go because you see these guys every day it becomes second nature. That is where they get a lot of the footage they like. Once you start letting loose and being you that is when they get the stuff that is good and juicy.” 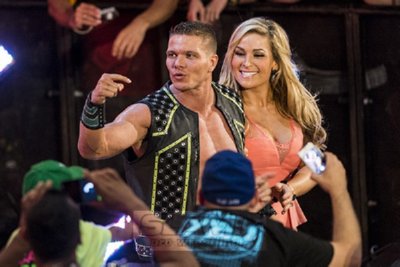 Nattie and TJ on the show are having relationship troubles, and from an outsider perspective watching the show he does come off less than stellar. He explained how the audience that Total Divas is aimed at may perceive him as the bad guy. Social media posts at times call him names and comment that Nattie should dump him, among other attacks.

“Is it bad if I say I get a kick out of it? Of course it is going to show the girls’ point of view. The show is aimed at women and many don’t watch WWE. John Cena said he is not going to marry Nicole [Bella] and not have kids. So from Nicole’s point of view, if you are a female non-WWE fan watching the show, he is the bad guy. Everything is situational and matters on the point of view. If people don’t like me because of it and I can blur those lines and bring it into WWE awesome.”

Kidd continues to be one of the most under-rated talents on the roster. His was one of the names talked about when Vince McMahon commented on Steve Austin’s podcast about talents not grabbing the brass ring.

“I think it fired a lot of the talent up. We have a super talented locker room, for any that maybe were coasting it lit a fire under them and for the rest of us ensured we just keep pushing. Every day here is different. One day I was in Phoenix at Axxess wrestling Cryme Tyme in the worst match we ever had with them, which is saying a lot, 48 hours later I am clotheslining Mr. McMahon in front of 58,000 people at Wrestlemania. Things can change here quickly.”

On Twitter and in interviews, Tyson Kidd has begun spouting facts, and shared a fact in advance of this weekend’s Edmonton and Calgary house shows.

“The fact is that I think a lot of the guys on the shows understand the history. They know what Stampede Wrestling meant to the industry and what the guys from Alberta meant to the WWE. Everyone will bring their A-Game. It may not even be that cold after these two days in Hartford. The fact is everyone is stepping up and know they don’t want to miss the opportunity to impress in Alberta. I absolutely love these shows.”

Jason Clevett started his SLAM! Wrestling career in April 2003 with an interview with TJ Wilson. Read up on young Tyson written by young Clevett here.