WWE 24 starts to pull back the curtain

Borrowing from HBO’s highly successful sports documentary series 24/7, the WWE has launched its own version on the Network: WWE 24.

The first episode premiered last week and took fans behind the scenes of WrestleMania 30. The 30-minute installment pulls back the curtain on the WWE’s flagship event spotlighting not only the unsung heroes of the production like Jason Robinson, WWE’s Production Designer, but also backstage moments between WWE legends such as the Ultimate Warrior and Hulk Hogan. 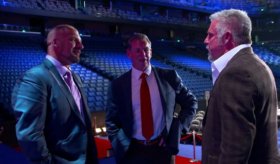 Comprised mostly of backstage snippets, interviews and match, event footage from WrestleMania 30 itself, WWE 24 is a bit unfocused at times, jumping from narrative after narrative, as it tries to present the most compelling stories surrounding the event. Speaking of which, how Triple H’s entrance came together is certainly not one of them. The entirely pointless segment just proves how pervasive the company politics can be at times.

On the other hand, the inspiring story of Connor Michalek, the boy was bravely battled pediatric brain cancer and died shortly after the WWE, Make-A-Wish Foundation made his WrestleMania dreams come true, was inspiring to see told again.

Also, knowing what we know now, seeing James Hellwig (The Ultimate Warrior) with his family backstage at WrestleMania feeling anxious about how he will be received after being away from the WWE for 18 years, is bittersweet, enlightening and in its own way acts as a tribute to the man behind infectious spirit and energy of the legendary Ultimate Warrior.

“I am thankful everything has happened the way it has because it made me a better man,” says Hellwig, who felt vindicated upon his return.

The portrayal of the biggest in-ring story of WrestleMania 30, The Undertaker’s loss to Brock Lesnar, is not as informative as one would like it to be. In the trailer, we see Vince McMahon, Chairman and CEO of the WWE, rushing backstage and demanding immediate assistance following the match.

“I need some help here,” shouts McMahon as a gaggle of WWE personnel jump to their feet.

Besides his walk up the ramp, we don’t see or hear from The Undertaker or any of the events that followed backstage, just stock ambulance and hospital footage. There aren’t any comments from those on hand either to explain the situation. Of course, one could rightly argue against showing The Undertaker seriously injured and being hospitalized, for a variety of good reasons. The thing is, why hype it in the trailer though or even tease it in the episode itself? It is just another example of the episode’s unfocused editing and storytelling. 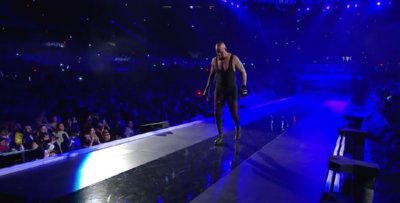 The Undertaker returns from the ring.

While the debut episode of WWE 24 puts a human face on the company and its personalities, it doesn’t really provide a lot of exclusive information about WrestleMania 30 itself. As we close in on this year’s WrestleMania, it acts as a sentimental trip back in time although it doesn’t put the event or the behind the scenes happenings in any kind of perspective.

WWE 24 could be an illuminating documentary series but only if it really explores the subject matter at hand and divulges exclusive details, otherwise, it might be considered just more poorly disguised PR fluff for the WWE. The next episode will surely show which direction WWE 24 is heading in.