Imagine for a second that you’re eight years old again. You’re curious about pro wrestling, but you’ve never seen it except for the occasional glimpses you’ve seen on TV, almost always in passing.

Your younger brother already shows signs of becoming a fan, and your dad has written about wrestling for years. You claim that you’re not that interested, but your family knows you’re always a little more attentive to it than you let on.

What could help cement your interest in sports entertainment? Would second row tickets to a WWE house show help? 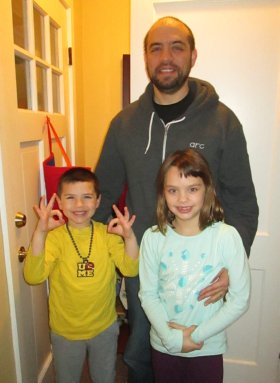 You can consider this anecdotal evidence, to be sure, but it certainly pushed my daughter Beth in that direction over the holidays. My son J.T. (currently age six) and I were always going to attend the WWE’s non-televised event in Hershey if we had the opportunity, but I wasn’t as sure about Beth. I had a feeling she’d want to go with us, but I wasn’t 100 percent certain it was because she just wanted to go out and do something or because she wanted to see wrestling up close.

As it turned out, we were very close. I didn’t realize our seats were in the second row until we picked up our tickets from will call, and even then it wasn’t until the usher helped us find them that it dawned on me. Even covering wrestling for 20 years, I can count on one hand how many times I’ve been that close to the ring for a WWE show, and only a few more times at the events of smaller promotions.

I had to explain to both my kids that this wasn’t something to which they should grow accustomed. J.T. was too excited to care, and Beth was old enough to understand that this was a rare treat. My suspicion was that the proximity would help her make up her mind about wrestling one way or the other.

It took a little while for her to warm up to how the live crowd reacts.

“I wasn’t expecting all the chanting and the noise,” Beth said.

But soon enough, she was standing on her chair in order to see the wrestlers during their entrances. She was chanting for Dolph Ziggler, one of her favorites that night, as he worked his way out of holds administered by “that scary eye guy,” who you probably know as Luke Harper.

Perpetuating one of the stereotypes of WWE fandom, she marked out the most for her brother’s hero, John Cena.

“Seeing John Cena wrestle in person,” Beth said when asked about the high point of the card. “I liked that part as much as J.T., because he’s a good guy.”

He took on Seth Rollins in a Street Fight, something Beth had also not previously seen. I had to answer multiple questions about why things that would normally warrant a disqualification were suddenly okay.

“It really surprised me when Seth Rollins and John Cena both brought out chairs and tables, because usually you don’t see that happen,” Beth said.

In case you’re wondering, we haven’t had the talk yet about the choreographed nature of the violence on display within the squared circle. I’ve considered leveling with my kids, particularly since we live in an era where fans are more in on what goes on (though not as much as they sometimes seem to think) in wrestling.

Ultimately, I decided that I didn’t know wrestling was staged when I was eight, so there’s no reason to rush things. They’ll figure it out soon enough. And in the meantime, they justify it in their own ways.

Beth certainly did, as she figured the wrestlers’ experience helps them through Street Fights relatively unscathed — and in a way, she’s right about that.

I asked her about the Divas match that night, too. Clearly, I still have some work to do as a father when it comes to Beth’s views on gender equality.

That aside, by the end of the night, I actually had to tell Beth to calm down a bit when she was yelling at Cena to look out. Of course we were close enough that he could actually hear her as she warned John about the briefcase shot that was coming from behind, but I didn’t want Beth to bother the older girl next to her.

I shouldn’t have worried, as that girl just looked at my daughter with amusement. It’s not often that you get to see a wrestling fan being born right before your eyes, after all.

For her part, Beth says she’ll definitely consider going with us again next time the WWE invades the Giant Center. She’s even content with the knowledge that we’ll be further away from the action, but she does say it matters who’s on the card.

“When it comes back, probably,” Beth said. “We’ll see what people are there.”