When Jeff Jarrett announced the creation of his new promotion Global Force Wrestling earlier this year, fans speculated with anticipation as to when the company would present its first show. Well, the wait is over, as GFW has teamed up with New Japan Pro Wrestling to present its annual January 4th mega-show, which will be available to North American markets on pay-per-view for the first time ever. 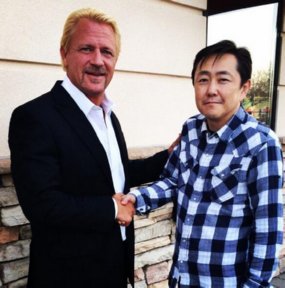 Jeff Jarrett of Global Force Wrestling and New Japan Pro Wrestling’s Chairman of the Board, Naoki Sugabayashi, in May 2014. Photo courtesy @RealJeffJarrett

“I’m really excited,” Jarrett told SLAM! Wrestling, just days before he flies out to Tokyo for the show. “It’s something that’s been in the works since we launched Global Force — actually, even prior to launching.”

“On April 7, 2014, the day after WrestleMania, I (announced the name of) the company to start the process of building the brand. Even before that, New Japan had reached out to me. They knew that I was going to be launching, and we got into discussions. They want to bring their product to North America. When I thought about it, it became a no-brainer on what’s the best way to make the biggest splash, and that’s the Dome show.”

“(The January 4th show) is their biggest show of the year. It has so much history — even though they named the show Wrestle Kingdom only nine years ago, I believe it’s the 24th year. So you have their biggest show in front of their biggest crowd — they’re on track to sell 50,000 tickets. And combine that with my philosophy of Global Force Wrestling, of bringing promotions in and getting agreements in to working with and promoting one another, and doing talent exchanges … it’s like the stars were aligned.”

“We solidified the deal in August,” Jarrett explained, “and we made it public at the G-1 Climax show in the Seibu Dome (shortly thereafter). Then the next step was to get the pay-per-view providers not just in the United States but all across Canada — Rogers, Saskatel, the list goes on and on. Also, people can download the Flipps app and watch it on their smartphones. We wanted to give people every possible opportunity to be able to watch this show no matter where you are.”

Of course, targeting a North American market meant that the show would need to have English-speaking commentators. And GFW has delivered in spades, signing Hall of Famer, Jim “Good ol’ JR” Ross to do the play-by-play. This show marks the first time in years that JR will be behind the mic for a wrestling event — and that in and of itself may be enough for many fans to order the event.

“Bringing in Jim Ross, it’s taken things to a whole other level,” Jarrett said, praising the commentary legend. “It didn’t take me long, once all the agreements were in place, to realize that if we were going to do this, we’d have to have the best.”

“When you look at, to put it in wrestling terminology, you talk about ‘what a run this guy’s had’ — you look at Jim Ross’ career, and it really points out that he has no peers. He’s not been one of the guys, but The Guy. From the days of Clash of Champions to all the WrestleManias and SummerSlams and Royal Rumbles and mega-main event Monday Night Raws through the Attitude Era. Jim has had a run unparalleled, unequaled. He is the voice of this generation of professional wrestling.”

Joining Ross ringside at the event will be former WWE announcer Matt Striker who, as a keen student of the game, will bring a lot of knowledge of New Japan to the table as well.

“We had to find someone who would complement Jim, and not get in his way, let Jim steer the ship,” Jarrett said about Striker. “But who knows the product — not just the ten matches that are going to take place. But really immerse themselves in the history of it. Matt’s IQ is up there — he’s studious, he’s highly-educated, and he’s articulate. You put that together in partnership with Jim, and it’s really a heck of a tag team.”

According to Jarrett, both men have done an incredible amount of research in advance of the event, in order to educate people who may not be familiar with the New Japan promotion and stars. The idea being to have a fan-friendly show that any and all wrestling fans can enjoy.

“Both of them have done so much preparatory work,” he marvelled. “Not just the background on the matches, but on New Japan’s history — how it came about, the history of the 42 years of the company, the history of the Dome shows, all the talent that has worked for this company.”

“GFW wants to bring fans all the historic perspective of New Japan,” he continued. “We’ve been doing that through globalforcewrestling.com and our YouTube channel. We want to show how important it is to professional wrestling as a whole.”

Having the opportunity to partner with such important companies is one of the reasons, Jarrett said, that he founded GFW. Though he’s mum for the time being on what that means beyond January 4th.

“It’s no secret that I’ve held details close to the vest,” he acknowledged. “because I don’t want to take away the focus from January 4th. In early 2015, the next steps about where Global Force is headed will be announced. I will say this, though: I definitely will not be a stranger to Canada in 2015, I promise you that. I’ve got some very exciting things in the works. Stay tuned.”