‘Get your T-shirts here!’ (And support indy wrestlers) 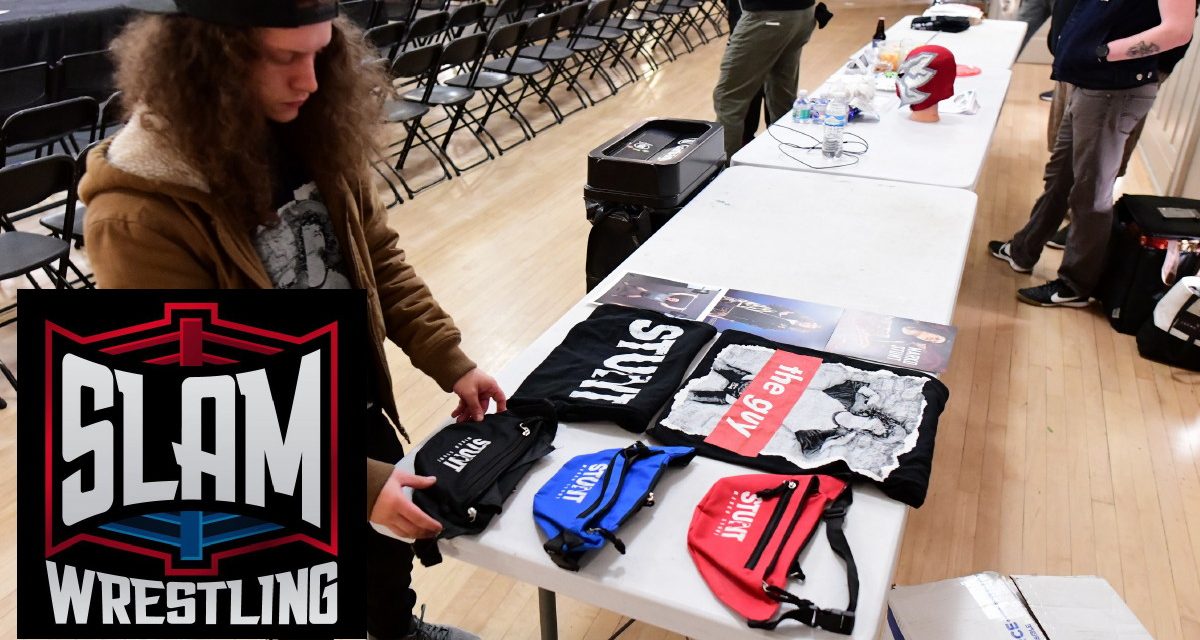 We’ve all got ’em, and though they may be stored in a closet or a drawer for the proper occasion, T-shirts are a key part of the professional wrestling business by this point.

We asked some of the stars of the indy circuit about the importance of the T-shirts to their livelihood and how they come up with some of the ideas. 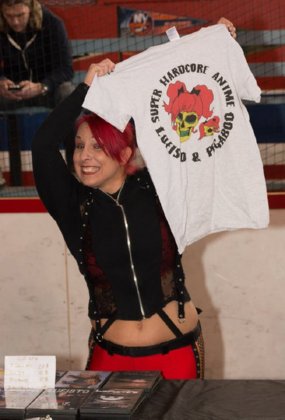 A great smile and a great T-shirt … must be LuFisto! Photo by Tabercil

The Young Bucks, Matt and Nick Jackson, are regulars on the indy circuit across the globe, and spent a little time in TNA as Generation Me. Despite their fame, they still have to hustle to make a buck.

Nick Jackson estimated that T-shirt sales probably account for a whopping 40 per cent of their income at this point.

“It’s so important. If we didn’t do T-shirts and if we didn’t have fans supporting us by buying them, we wouldn’t make enough money to live,” said Nick Jackson. “It’s literally supporting me and Matt’s family.”

“It’s going directly to buying my kids cereal,” confirmed Matt Jackson, comparing it a little to a gratuity in a restaurant; it’s a way for fans to say thanks.

Like the Young Bucks, Matt Cross is in demand in many places, and currently holds down a spot in Lucha Underground as Son of Havoc. Selling merchandise is key to his survival.

“Professional wrestling is the sole source of my income, so it is crucially important. I mean, there is traditionally only shows on weekends in the States, so I’m usually only working one, two or three days a week, so a big portion of that is merchandise,” Cross said. “I don’t force anything on anyone. I stand here, and if they would like to come up and meet me, and pick something up, that’s awesome. It helps a lot and it very directly to keep us chasing our dream, to keep us doing what we want to do.”

It’s not any different for the wrestlers with a bigger profile. Robbie E, of TNA, and more recently, a star on CBS’ The Amazing Race, needs the sales too.

“Selling merchandise is how people make money in pro wrestling. You get a big following and they want to wear what you’re wearing, so it’s huge,” Robbie E said. “TNA has a lot of shirts out, a lot of merchandise with Robbie E and Bromans, and now me and Brooke are Team Bro. I always love wearing it, and hopefully the fans love wearing it.”

LuFisto placed in the number five spot for 2014 in the Pro Wrestling Illustrated Female Top 50. With experience in web design in real life, she has built a great website to move merch when she’s not on the road.

“It’s basically our salary. We don’t wrestle every week, but we can sell merch every week, like I do on my website,” she said. “It’s a way for us to get a little bit more. It’s always fun to see the fans wearing our T-shirts and support us that way. If you show up and you see a bunch of your T-shirts in the crowd, you already know they’re behind you and support what you do, which is amazing.”

While websites are great, nothing tops the personal experience, said Matt Jackson.

“A lot of people just want to meet us, and they almost feel like they have to buy something just to support us, which is nice, because they don’t. It’s always nice to get that,” said Matt. “But we notice sales increase after our matches, because a lot of people aren’t familiar with who we are, and we teach them who we are. They watch us wrestle, and are like, ‘Whoa, whoa, whoa! I like those guys. I want to go support them.’ We’ll literally run to our table after our match and fans will follow us over, and that’s when we sell the most stuff.”

Cross agrees that sales better after your match. “Especially with a guy like myself, if you haven’t seen me, here comes a guy doing moves that no one else is doing, and doing things that other people aren’t capable of doing, they are going to leave and go, ‘That was pretty neat. Let’s see what this guy has.’ Especially the DVD or something like that, that they can take home and see something more.” 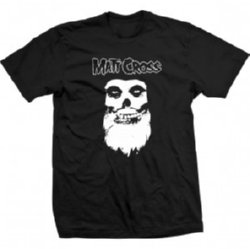 Is it Matt Cross or the Misfits?

Where do the ideas come from?

A big fan of heavy metal, LuFisto mines that for inspiration (and for tattoos).

“For my T-shirts, I like them to look either very anime-ish or like rock bands, because I think that people like to wear T-shirts that don’t necessarily look like wrestling, but something that is cool that they can wear everywhere,” she said.

Cross agreed that the T-shirts need a cool factor.

“I am in the minority in that I try to make things that I would actually like and that are cool. If I was smart, I would get like a My Little Pony design and put my ugly face with a beard on it, and it would have some sort of a nostalgic ring and sell a million. I think a lot of guys nowadays are just going for all these plays on has-been T-shirts, which I’m kind of against. I like unique, cool things. I’m drawn to the art form of wrestling,” said Cross. “I like punk rock. I like the unique shirts that individuals, artists ultimately, come up with. That said, my current shirt is totally the crimson ghost from the Misfits. Someone designed it for me, but it was just too cool. I didn’t want anything with the beard, I didn’t want to be commercially-tied to the beard. My newest design showed up in my inbox and it was the crimson ghost from the Misfits, with a beard, and it was just too cool to turn down, so I ran with that.” 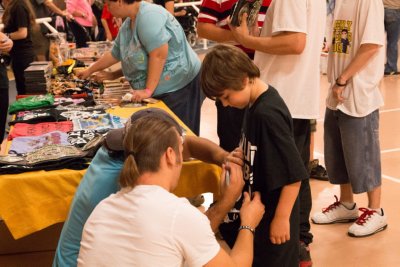 The Young Bucks sign a T-shirt for a young fan. Photo by Tabercil

Like the Young Bucks themselves, their T-shirt designs are fun, lively, and seemingly everywhere. They have a whack of them for sale, and are incredibly enthusiastic about the creative process, stumbling over each others words to get the point across.

Nick: “At first we had to hire an artist to actually do our ideas, but now …”

Matt: “I came up with a lot of the ideas, and brainstorm the idea and tell the artist what I wanted. Now it’s gotten to the point where it’s taken on a life of its own.”

Nick: “Our fans are designing.”

Matt: “They’re just coming up with the coolest stuff, man. We’re really appreciative to have these kind of people to help us out.”

Nick: “At first, we were getting charged a lot to get the designs done.”

Matt: “Even to this day, I’ve still got my guys that I’ll go to for a design.”

Nick: “Now we’re getting cool stuff for free from our fans.”

Matt: “It’s fun because you can have a design and within 24 hours have it on a T-shirt.”

Matt: “We like to have a variety. There’s so many fun things to choose from.”

Nick: “It’s crazy. We had a fan Tweet us not too long ago a photo of his closet. He had 31 of our T-shirts. He had every single one of our shirts. Do the math, that’s a lot of money times $20. It’s awesome that we have someone that supports us like that. A lot of our fans do that; they don’t just buy one, they buy multiple.”

Matt: “They want the whole collection.”

Matt: “We like to have the most variety, the most to choose from, the coolest designs. We pride ourselves in putting out the coolest stuff. They actually did an online poll at prowrestlingtees.com and the coolest store, and we won. That was really meaningful to us, because we put a lot of thought into this. We’re happy with the collection we have. It literally helps feed our families, so we appreciate the support.”

Greg Oliver has a couple of wrestling T-shirts that he trucks out occasionally, like his Jerry Lawler AWA World champion shirt (from Memphis in 1988) and a Ric Flair WCW shirt from 1988. He also sells some vintage 1970s AWA iron-ons for T-shirts — check them out at www.oliverbooks.ca/tshirts.html. Greg can be emailed at goliver845@gmail.com, and you can follow him on Twitter @gregmep.