With the passing of Frank Parker on Saturday, after a long battle with cancer, it’s worth praising both the man and the often-overlooked importance of the referee in the success in a wrestling match — and behind the scenes.

Chances are you never heard of Frank Parker, but there was a time when there was someone similar in every territory in wrestling, a key figure that helps link the generations of wrestlers, provides continuity for the audience and in the dressing room. 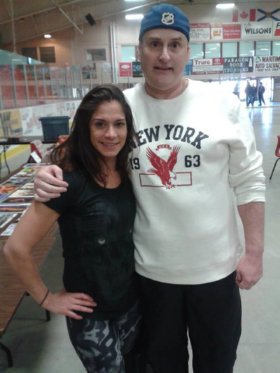 I first met Frank in 1999, when I made a trip out to Halifax for a wedding of two great friends from university. Destination weddings are fun, because everyone hangs out together and shares in the good memories. But me being me, I convinced my wife to miss out on the party cruise the night before the wedding so we could go to a wrestling show in Berwick, Nova Scotia, about an hour and a half drive away. (Of note, the groom LOVED the autographed Leo Burke photo I placed on the gift table for all to see!)

Frank was refereeing the matches for Emile Dupre’s Atlantic Grand Prix show that night in Berwick. As such, he was a key guy to allowing me access to the dressing rooms (heels and villains were separate, naturally). What great memories from that show — sitting down with The Beast (Yvon Cormier) and his brother Leo Burke — and years later, I’d be invited to a Cormier family reunion/celebration in Memaramcook, New Brunswick, where I last saw Frank; meeting Joe E. Legend, who would later become a columnist for this site; seeing a very, very young Rene Dupre in the ring when he was Rene Rougeau; talking with the Cuban Assassin, who’d entertained me so often on Stampede Wrestling… I wrote about the experience (Grand Prix a learning environment). My wife also took some photos for a gallery, and while they may not be the greatest, that’s Frank refereeing every match.

We kept in touch, with email making it easy. Later it was through his Facebook page.

If I needed some thoughts about a prospect from Atlantic Canada, or memories of a legend, I’d contact Frank. He knew everybody, and everybody knew him. He’d been around, to say the least.

He lobbied for a profile on his own career, and I am glad that I did it: Miles add up on ref Parker. (The lead about “it’s not the years, it’s the mileage” from Raiders of the Lost Ark was ironically appropriate, in retrospect, as we watched that movie with our son for the first time on Saturday, the day Frank passed.)

Earlier this year, his cancer evilly-aggressive, some of his friends from the Maritime wrestling community asked for my blessing to present Frank with an actual plaque for honour his listing in our Canadian Pro Wrestling Hall of Fame. Of course, I helped out.

Somewhere in there, I did give him a call, to wish him well, thank him for his help and friendship. I can only chuckle now, as he offered to pay back some money that I lent him at some point along the way; I suppose it was a meaningful gesture on his behalf, but for me, the money had long since been forgotten, the debt forgiven.

So I knew Frank Parker, but not as well as his friends and colleagues on the East Coast of Canada. It’s always moving and thought-provoking to read posts people make about loved ones when they are gone, so rather than me going on any further, a few are posted below.

Robert Maillet — Kurrgan in WWE: Yesterday I lost a very dear friend of mine. His name was Frank Thomas Parker. I first met him when I started my career in wrestling in the Maritimes 24 years ago! He was first a ring announcer but found his calling when he became a referee. He loved what he was doing and was a friend to all who met him on the road. And being a Hall of Fame wrestling referee is proof of that. We kept in touch since, he was close to my family as we did for his. He was happy to be called Uncle Frank to our daughter Mekedess and loved her very much! When we first learned that he was fighting cancer, we came down to see him to lift his spirits up. He was always happy to see us when we did. I wish I would have done it more often. He fought it with courage and dignity with his family by his side. My condolences to his wife Karen and daughters Emily & Haley. My family and I will miss him forever. Every time we ended our phone conversation he told me he loved me! And I would tell him that I loved him too! Rest in Peace my friend.

Devin Chittick, wrestler and promoter: Just learned of the passing of renowned Maritime wrestling referee, Frank Parker. He passed this morning at 54. Frank was a character! I met Frank in 2002 and he worked dozens of shows for me up until 2006. Frank was creative, helping me with storylines in matches I booked with Gangrel; Chi Chi Cruz; and several others. My most memorable matches he worked for MSW were at Doolittle’s in ’03 and East Hants in ’02 (where he convinced me to do an angle with him and referee Arron Beaver where the two of them ended up brawling and bloody, lol). And lastly, I will surely NEVER forget our summer tour of the South Shore and all the fun we had together one night in Digby hahaha. My condolences to his wife and two daughters. I’ve got a couple pics of us together, I’ll see if I can root them out and post. The wrestling community will miss the antics of Frank.

Harold Kennedy, key Maritime fan (and so much more) New Scott: “I just read the last text message Frank Thomas Parker sent me it said “Harold, you will always be my hero” I don’t know what I ever did to deserve the love and respect Frank gave me, but Frank you’re my hero. Not only was Frank a Maritime wrestling legend Frank was a great friend, and if you knew him you knew the love he had for his wife and two daughters (Emily & Haley). I had the honour and privilege of getting his SLAM! Wrestling Hall Of Fame trophy made for him. I will truly miss you Frankie rest in peace my friend.”

Scott F. D’Amore, wrestler, trainer, promoter: “RIP my friend. We shared a lot of laughs in and out of the ring. The memories of traveling up and down the highways with Adam, Jaybird, Joe E Hitchen, Cheech, and so many others I treasure still to this day. My heart goes out to Karen, Emily Marie Parker, and Haley Parker. I had the honor of staying, heck practically living at times with the Parker family many times over the years. It was such a warm and loving house. Frank loved all of you to the very depth of his soul and was so proud of each of you. Frank lives on through all of you and the many of us that he has touched over the years.

Ron Hutchison, wrestler and trainer: “My sincerest condolences going out today to the family and friends of former Maritime wrestling referee and Truro Daily News wrestling columnist Frank Thomas Parker. I last saw him during my summer 2013 tour of Grand Prix Wrestling where we enjoyed a few laughs, reminisced about days gone by and, no doubt, hoisted a cold one or two. RIP Frank. Today I will be sure to hoist another cold one in your memory my friend.”

Bill Skullion, wrestler: “Frank, you were a hell of a man, and an even better ref. Easily one of the best I ever had the pleasure of working with. You will be missed by many, my old friend.”

Peter Smith, wrestler Brody Steele: “The measure of a man is how he deals with a bad hand. Frank Thomas Parker was recently dealt the worst possible hand but he played it with dignity and grace. He made his family and friends extremely proud and even managed to live and laugh to the fullest in his last year. RIP my friend, you will be in my thoughts forever.”