There is a moment on the Macho Man: The Randy Savage Story that exemplifies what effect the larger than life personality had on those he worked with or those who were in his private life.

In recounting his legendary match with Savage at WrestleMania III, Ricky Steamboat has to pause on camera as he becomes choked up. Visibly moved by pride in the accomplishment and his memories of Savage, he takes a breath, fights back tears before he can continue speaking and even then, it is in a broken, cracked tone. 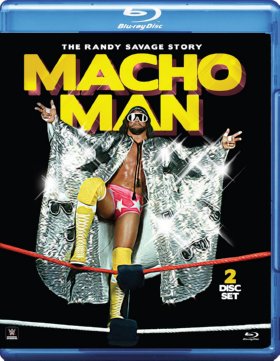 Casting aside their usual characteristic bluster, other superstars like Diamond Dallas Page, Kevin Nash, Hulk Hogan and loved ones such as Savage’s brother Lanny Poffo and mother Judy have their poignant moments as well remembering the performer, athlete, friend, son, and brother that Randy Poffo was. Keep the Kleenex handy. You will certainly need some.

Packed with interviews from family members to childhood friends, industry comrades and former baseball teammates, the first disk in the Macho Man: The Randy Savage Story set is an extensive, no holds barred look at the career but more importantly, the life of the pro wrestling icon.

We learn of Savage’s unrelenting pursuit of personal perfection at an early age. A drive which pushed him to excel in high school sports and shaped the rest of his sports, entertainment career. How beating on a swinging car tire in the backyard to strengthen his baseball swing evolved into him meticulously and methodically filling page after page of a notebook with almost every step and move of what was to be his classic WrestleMania III match with Steamboat.

It becomes abundantly clear early on that Savage was an individual who thrived on doing the best he could at whatever he put his mind to. Unfortunately, he did not cut himself many breaks and according to many, was extremely hard on himself.

The word that comes up most often as people relate their experiences with Savage is “intense.” This seems to have been Savage’s blessing and his curse. It is that intensity which made the Macho Man character such an icon, his charity work so heart-felt and his life so memorable. It is that intensity though that hurt some of his business and personal relationships. As Kevin Nash, Hulk Hogan and others attest to, Savage’s stubbornness and distinctive passion clouded his judgement at times making him difficult to work with from time to time.

Of course, no biography on Savage would be complete without delving into his relationship with Miss Elizabeth (Hulette), the woman many still consider the undisputed First Lady of Professional Wrestling. While some argue whether or not Savage was over-protective of Elizabeth especially when they were on the clock, what is undeniable is they were deeply in love and true professionals in front of the camera even when their relationship was coming to an end. Not everyone would have been willing to carry that off as Savage and Elizabeth did and it must have come at some personal cost to them both.

The matches on the second and third disks are a varied collection that together tell the story of Savage’s historic runs in both WWE and WCW. Consisting mostly of house show matches, his local showdowns with Bad News Brown, Harley Race, Ricky Steamboat, Bruno Sammartino, and Hulk Hogan pair well with his high profile, pay-per-view bouts with The Ultimate Warrior, Ric Flair and Diamond Dallas Page.