CLEVELAND — The city of Cleveland lives and breathes with its football team, and during the afternoon, the Browns gave up a last breath for the 2014 season in a stinker of a game at home. For wrestling fans, there was a bright light later in the night though, with the WWE’s TLC pay-per-view in town.

And it started off with hometown boy, Dolph Ziggler, doing what the football team couldn’t — win.

Ziggler and The Miz, who is from nearby Parma, along with lifelong Cleveland fan Jerry “The King” Lawler attended the Browns 30-0 humiliating loss to divisional rival Cincinatti Bengals, and were featured prominently before the game at First Energy Stadium, and during it, launching T-shirts into the crowd.

A fan behind us at the game — yes, I am a Browns fan — talked about how Ziggler, then Nick Nemeth, went to his high school in town and, though they weren’t anywhere close to the same age, his wrestling legend lived on.

That night at the PPV, at the Quicken Loans Arena, Ziggler probably got the second biggest pop of the night, only behind a returning Roman Reigns — more on him in a moment. 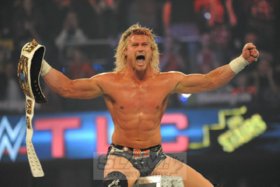 Dolph Ziggler won on Sunday where the Browns couldn’t. Photo by Mike Mastrandrea

Wearing new trunks that featured the Browns traditional “Brownie” character, Ziggler opened the show with a Ladder Match win over Interncontinental champion Luke Harper, that popped the crowd huge. With the title hanging above the ring, the match was much more defined in what the actually finish could and should be, especially compared to the subsequent Chairs Match (won by The Big Show by pinfall), Tables (won by John Cena in an overbooked nonsensical but fun match) and then the finale, a Tables, Ladders and Chairs match, where Dean Ambrose went down to a sparking TV set more than to Bray Wyatt.

In a live setting, a TLC show is both awesome and frustrating, because so much of the action takes place away from the ring. Some fans will be able to see well, and others won’t … and the big screens are a necessary crutch for everyone. Similarly, the down time is something we tend to forget watching at home, and there were at least three occasions where the canvas in the ring was changed, and there was a really intense sweeping session following the Tables Match, to try to clear away all the debris. Security had a real challenge keeping the fans back from the falling toys as well, though it appeared to be a special barricade from where we were sitting.

If I were rating, and I guess I should, I’d put Reigns’ run-in to stop The Big Show from interfering in the Rollins-Cena match easily the biggest reaction of the night, followed by Ziggler, then Cena (with the non-traditional split reaction), and then Ambrose. Definitely mid-card material were the likes of Ryback, Jack Swagger, and AJ Lee. The biggest boo was probably for the WWE tech crew when it lost the signal on the TitanTron and the massive screens in the “Q” that were showing the outside the ring, and hard to follow, action from the Wyatt-Ambrose main event.

Post-loss, and off PPV, Ambrose finally awoke from his supposed knockout from the gimmicked computer screen, and received a nice cheer from the crowd, not unsimiliar to a football player getting his bell rung and getting applause from the fans. The Unstable Ambrose then went a little nuts, smashing the various plunder still left in the ring.

Truthfully, the ending left the live crowd cold, but not as pained as it was by the sad tradition of the Factory of Sadness that is Browns football.