Q & A with John Hennigan, a.k.a. John Morrison and Johnny Nitro: Part 1

With a penchant for pyrotechnics and Hollywood flash, John Hennigan (a.k.a. John Morrison during his WWE tenure) is a true American original. He’s known for dazzling audiences around the world with his lightning fast reflexes and innovative high-risk aerial maneuvers. 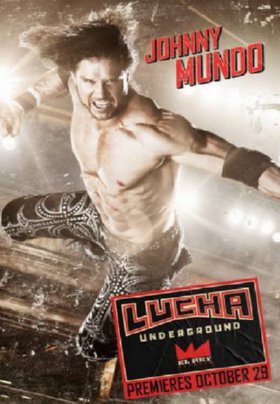 As a member of MNM with Joey Mercury and Melina, and later tagging with The Miz, Hennigan captured numerous WWE championships, from the World Tag Team belts to the ECW and Intercontinental titles.

Since leaving WWE a few years back, Hennigan has been traveling the world, wrestling on the independent scene while pursuing a career in acting. “The Guru of Greatness” has also developed a new revolutionary fitness program called Out of Your Mind Fitness.Add to that, “The Shaman of Sexy” has joined the brand new wrestling promotion Lucha Underground, which debuts October 29 on El Rey Network.

That’s why SLAM! Wrestling recently caught up with “The Prince of Parkour,” who will be running seminars at Santino Marella’s Battle Arts Academy in Mississauga this weekend, and appearing on the Bad Dreams wrestling card at the Don Kolov Arena on October 26.

Below is part one of our interview, in which Hennigan chats at length about stunt fighting, his new fitness program, lucha libre, independent wrestling, and the “WWE handcuffs.”

Stay tuned to SLAM! Wrestling for part two, in which Hennigan delves into action movies, storytelling, and the secret to Santino’s success.

SLAM! Wrestling: Tell us about your upcoming weekend at Battle Arts Academy?

JOHN HENNIGAN: Oh man, Battle Arts Academy that Santino put together is awesome. It’s really cool to see someone like Santino, who is one of the most positive people I know, always enjoying life. I don’t think anyone has a bad word to say about Santino.

But what he put together is something that I’ve thought about doing, not anytime soon, but at some point maybe I’ll try to put together myself. A facility that trains multiple disciplines, so Battle Arts Academy has got boxing, Muay Thai, MMA, grappling, jiu jitsu, and pro wrestling integrated, as well as a whole gym with functional training equipment.

So the type of training that I would do there is a little bit of everything, which is kind of what I’m doing now to train for a movie. It’s stunt fighting — some people call it choreography or movie fighting — and it’s what I’ve been working on. And my specific style of stunt fighting I think integrates a lot of pro wrestling moves and a lot of parkour, into grappling, Muay Thai and boxing. So the kind of training I’m doing is learning and taking movements from all those different disciplines and putting it together to have the most dynamic fight scene possible.

I’ll be doing my fitness seminar, doing a pro wrestling seminar and doing a show with the guys that he’s training with. And outside of that I’m going to take advantage of the place and grab all this stuff they’ve go. I’m really looking forward to it, and I’m especially looking forward to hanging out with Santino and checking out the place.

SLAM! Wrestling: Your upcoming fitness seminar at Battle Arts Academy is called Out of Your Mind Fitness. What sets it apart from other fitness programs?

JOHN HENNIGAN: It’s a revolutionary system that focuses on exercises that improve the body’s ability to do what it was mean to do, which is move — run, jump, push, pull. It’s functional training, and if your goal is to get in the best possible shape in the least amount of time, then this is how it’s down.

There’s unique progressions to extreme exercises, combined with new techniques created by me and Jeff (Carrier) that are programmed to make the most out of every second in the gym. So instead of just adding weight to exercises, we often utilize your body weight and change leverage to add difficulty. And this recruits multiple muscle groups to accomplish movements. Functionality forces more pronounced changes in body chemistry by constantly recruiting multiple muscle groups as opposed to isolating just one. And every week of ever level will test your limits and get you looking and feeling your best.

SLAM! Wrestling: So what’s the ultimate goal of your fitness program?

JOHN HENNIGAN: Basically, it’s to build strength, power, hypertrophy and conditioning using your bodyweight as the principle resistance. Traditionally, someone would increase the weight of an exercise to get stronger, and we’ve flipped that on its head. So to change intensity using your body weight, we show you how to manipulate your body in order to imitate a heavier set. This kills two birds with one stone by making the exercise more intense, and it forces you to keep your secondary muscles engaged. People may think, 10 reps is 10 reps, right? Not exactly. Our reps force you to recruit more muscle fibres than you would have otherwise, which therefore speeds up your results. 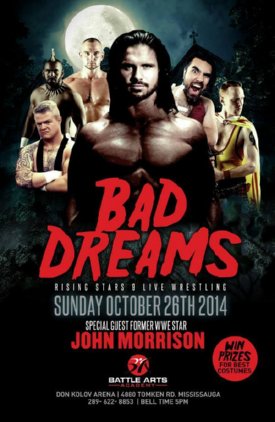 SLAM! Wrestling: You’ll also be appearing in the upcoming premiere episode of Lucha Underground on El Rey Network, wrestling as Johnny Mundo. What can fans expect from this California-based promotion?

JOHN HENNIGAN: The gist of it is lucha libre Mexican culture, but mixed with American WWE-style storytelling and psychology. So they’ve got a bunch of sick luchadores from AAA (Asistencia Asesoría y Administración). Then there’s Ricochet, who is now Prince Puma, he’s an American independent worker and the dude’s sick. People who know Ricochet know how good his skills are. Aside from him they’ve got Fenix, Pentagon Jr., Drago, and a ton of guys from AAA and they’re bringing their Mexican wrestling style and culture to Lucha Underground.

JOHN HENNIGAN: Yeah, and Vampiro too, an icon in lucha. We’ve got these great old school guys, like you mentioned Konnan, who was one of the first guys to bring lucha from Mexico to the United States and Canada.

So you’ve got this melting pot of styles, wrestling wise. But on top of that you’ve got Robert Rodriguez, who is well known for making gritty action films. And a lot of our backstage vignettes are being filmed in a way that they are going to look like scenes from an action movie. So it’s a different take on wrestling. And everything I’m interested in is right there in Lucha Underground: movies, creative and different backstage vignettes, the style of Mexican wrestling, the style of American wrestling. It’s just this big beautiful blend of everything and I think it’s going to be wicked. People are going to be blown away when this sh– debuts.

SLAM! Wrestling: Did you see much AAA or CMLL (Consejo Mundial de Lucha Libre from Mexico) wrestling growing up in California?

JOHN HENNIGAN: At first, I really got into lucha when Super Crazzy, Juventud (Guerrera), Psichosis, and Rey Mysterio were in ECW. So it was after seeing those matches that I started looking up AAA and CMLL, trying to find more lucha because I knew that was the kind of wrestling I wanted to do. So you can imagine how awesome it is for me to be a part of Lucha Underground now.

SLAM! Wrestling: You’ve also wrestled in Puerto Rico in recent years. What was that like?

JOHN HENNIGAN: It’s ridiculous. The Puerto Rico audience is absolutely wild and to be able to wrestle Carlito in Puerto Rico is pretty rad. It’s also pretty rad to have no WWE handcuffs on, where we could do whatever we want. So we both fought out into the crowd like Bruiser Brody and Abdullah the Butcher back in the ol’ days, and we both went out there that night and tried to steal the show and have a five-star match. And we did. And it was really cool to have that experience down there.

Independent wrestling is a rewarding thing and it’s pretty cool to see all these people wrestling in different independent promotions because they love it.

SLAM! Wrestling: You mentioned the “WWE handcuffs.” Can you elaborate?

JOHN HENNIGAN: In the indies, you can do whatever you want without what we call the WWE handcuffs put on. And I’m a prideful guy, so if I’m going to do something, I’m going to do it to the best of my ability. I don’t ever want to ever go out there and phone it in, because I feel like that’s a waste of everyone’s time. If I’m going to wrestle, it doesn’t matter where it is or how big the crowd is, I’m going to put on the best match I can. And having the freedom to do that, wherever you are, it feels pretty good. 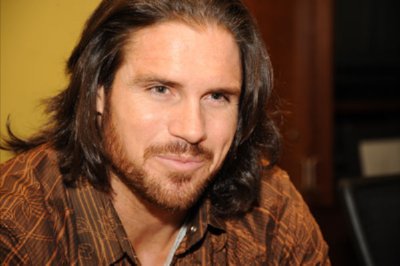 John Morrison at an interview in July 2011. Photo by Mike Mastrandrea.

So to answer your question, in WWE a lot of the time, it just comes down to a matter of timing. They’ve got a certain amount of wrestlers and a certain amount of time, and if your spot says you’ve got six minutes on TV to tell a story, then it is what it is. And there’s a lot of limitations and compromises that come with that. So that’s what I mean by the WWE handcuffs. That’s why it’s so nice in the various independent promotions like 2CW or FWE Grand Prix to have the freedom to tell the kind of story I feel like telling on any given day.

SLAM! Wrestling: And you certainly didn’t have the “WWE handcuffs” on wrestling for Juggalo Championship Wrestling…

JOHN HENNIGAN: (Laughs) No, that’s for sure. You know, traveling around the world with WWE is awesome, but when you leave WWE, you’re going from independent promotion to independent promotion and getting to work all these guys who are passionate about wrestling. They’re doing it because they love it, and they’re the best at what they do in their promotion. Which is why I end up wrestling them, from Sami Callihan to Christian Rose to Bad Bones and Gabriel Angelfire in Germany.

And then you do shows like I did for Juggalo Championship Wrestling, where I wrestled at The Gathering of the Juggalos. I won a triple-threat match, and afterwards I was celebrating in the ring with Matt Hardy and I get pelted repeatedly with cans of Fanta pop, which is their thing at The Gathering, throwing Fanta at people. So I was standing on the ropes with my hands up and out of my periphery, I caught a full can of Fanta flying at my head. And it was one of those reflex reactions where I just reached up and somehow caught the can right in front of my face. So I whipped it back at the guy who threw it and nailed him in the head (laughs).

That’s the kind of stuff where, when you leave WWE there’s no quality control. That wouldn’t happen at a WWE show, so in a way it’s kind of cool. I’m not saying I’m happy having soda thrown at me in the ring, but it’s what makes the independent wrestling experience different once you’re outside the WWE umbrella. I mean, in WWE, if you threw a can back at a fan after they threw it at you first, you could get in a lot of trouble for that.