One of the longest rivalries in professional wrestling, the constant battle between “half-brothers” Undertaker and Kane has provided one of the more interesting angles in the modern era of wrestling. As rivals, the two have competed in nearly every match in the book, ranging from infernos to cells and even to being buried alive. While the two behemoths are dangerous in the ring with each other, there is perhaps one scarier possibility than having to step between the two as enemies. 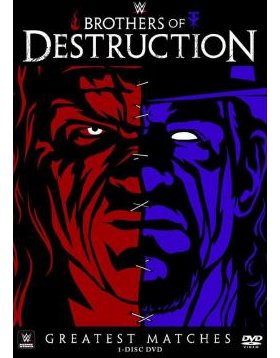 Aptly named the Brothers of Destruction, Undertaker and Kane have taken to the mantra of good friends, better enemies. Though they will forever be embroiled in rivalry, the two have proven to be one of the toughest tag teams in recent memory when on the same page. In the new Brothers of Destruction: Greatest Matches DVD, their best matches are shown against the likes of The Natural Born Thrillers, The Dudley Boyz, and Edge & Christian.

As the title implies, the matches themselves are the focus of this release. Therefore, the set seems a little bare bones. Considering the interesting back story between the two, perhaps a documentary portion would have been a good addition to the DVD. Still, the matches themselves span a lengthy period of time enough to see the development and changes of the characters and in-ring styles .

The DVD starts out with a brief introduction detailing in short the history between the two and what brought them together. From there, we are treated to the initial 2001 run of the Brothers of Destruction, which earned them a pair of WWE Tag Team Championship reigns and a run with the WCW World Tag Team Championships. From there, we fast forward to their reunion in 2006 after years of feuding and flirting reunions. The disc closes out in that second reunion that lasted on and off until 2008.

Depending on the price you can get it for, this DVD is at least entertaining enough for the money. While a little short on content, the coverage of a different side of a decades old story is a unique one that often gets overlooked compared to its much larger rivalry. The changes in character and general styles in that five year gap is also an interesting study for astute in-ring enthusiasts. While it has its shortcomings, the matches on the DVD give a look into a rarely discussed tag team that made good friends, but better enemies.