Mad Maxine has quite a story to tell

In the 1980s, Mad Maxine ended up in the world of professional wrestling because her alter-ego, a newly minted 24 year-old journalist named Jeannine Mjoseth, was filled with a sense of adventure and wanderlust. “I had gotten a journalism degree and was working in a retirement community writing for their newspaper,” she explained. 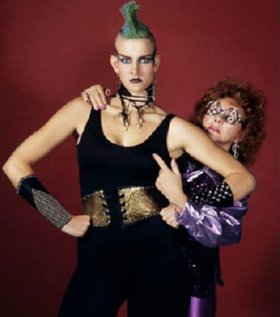 But it soon became clear that writing for the newspaper at a Florida retirement community just wasn’t going to provide enough excitement. At a party one evening, Mjoseth met a pro wrestler who was dating her friend. He made a strong impression as he boasted about his pro wrestling lifestyle. “He told me, ‘I work an hour a day, I get to work out for my job, and I travel.'”

That was enough to capture Mjoseth’s attention. The 6-foot-2 Mjoseth had long been involved in athletics, playing basketball at the University of Kentucky (1977-1979), and she was into fitness. She liked what she was hearing about the travel, too. “I wanted to have a big adventure before I settled down. I was dating a guy who was going to Chad, Africa, to work as a water engineer, and I had some interest in going there.” Libya had just invaded Chad and Mjoseth considered covering the war as a foreign correspondent.

Her interest piqued, Mjoseth pressed the young wrestler for more information. “He told me his mom was also a wrestler.”

“Mom” turned out to be the legendary Beverly “The Hammer” Shade, one half of the Arm and Hammer Connection, who was happy to meet with Mjoseth and show her some moves. She laughingly recalled asking Shade and her partner, Tracey Richards, “How do you make it so it doesn’t hurt?” Mjoseth explained, “I had this thought that they had a secret skill to magically make it not hurt.” What was Shade’s reply to the wannabe wrestler? “It ALWAYS hurts!”

At Shade’s recommendation, Mjoseth also made a stop at a local mattress factory where Karl Von Stroheim was training a bunch of his followers in the manly art of grappling, on quilted bedding, of all things. Mjoseth didn’t hang out there for too long, returning to Shade, who then referred her to The Fabulous Moolah’s school in South Carolina.

In “Meeting Moolah,” the first chapter of a book she’ll publish once she signs with a literary agent, Mjoseth writes about her arrival at Lillian Ellison’s compound, where she was greeted by the perennial women’s champion and diminutive wrestling star Diamond Lil, who Moolah referred to as “my damned midget.” Mjoseth describes her book as being “70% true. It’s a creative treatment of my experience there.” What is 100% true is Mjoseth’s low opinion of Moolah as an individual: “She was an evil person. I understand why. She came from nothing. Her mother died when she was just eight and she was never going to be poor again.”

Still, Mjoseth was deeply troubled by the system Moolah established at her compound to keep her students under her control. The trainees were isolated and exploited. Moolah charged them both rent to live in the barracks at her compound, as well as training fees, which Mjoseth says amounted to $1,500. “The girls went into debt to her and she controlled their lives,” Mjoseth recalls. “I made sure I had a job so I could have a phone and a car. The others were kind of marooned. It was an environment ripe for abuse.”

The job Mjoseth held at the time was at a Kinko’s copy shop in town. While at work one day, she overheard two customers discussing how a paramilitary group affiliated with the North Carolina Ku Klux Klan was moving into South Carolina to establish operations. The men were editors for The Black News, and they wanted to cover the story in their newspaper, but sending a black reporter to a Klan meeting presented obvious safety issues. “I was eavesdropping and told them, ‘I could do that,'” Mjoseth remembered. “I put on a short skirt and a tight top to distract the Klan leaders, and ended up interviewing the Grand Dragon.” Her intrepid reporting earned her an editor’s gig with The Black News, although it wasn’t destined to last long as she was struggling to get her wrestling career under way.

Back at Moolah’s compound, Mjoseth was training hard with another future star, Luna Vachon, who Mjoseth counted as a dear friend. “She [Vachon] was a sweet, sweet person. It broke my heart when I heard she had died. What a tragedy.” Mjoseth knew Vachon when she was called “Angelle,” and hadn’t yet developed the muscular, gravelly-voiced persona she would later become famous for.

Mjoseth didn’t feel like her hard work was yielding any financial benefit, as months were passing, and there was no talk of any wrestling work. She recalled that Moolah did however, offer her trainees work of a different, insidious variety. “Moolah did send girls out to this guy in Arizona and pimped them out. I actually spoke to him on the phone and asked him what he was looking for. He said, ‘If I’m spending all this money, you know what I want.’ That was part of Moolah’s way of making money. She was just a bad person. Moolah didn’t have a good bone in her body.”

Notably, Mjoseth reports that Moolah herself didn’t set foot in the ring to provide any training, a job that was left to veteran pro Donna Christenello. Mjoseth felt she had sufficient ability in the basic moves and bumps. “We trained four hours a day, and I thought, ‘How much tougher do I have to be to have an actual match?'”

Mjoseth made a decision. “I wanted to get Moolah off the dime. I thought, ‘If I come up with a look, a persona, and a name, she’d have to do something with me.’ So, my friends and I went to a hair salon, and drank champagne, and I got a Mohawk! I was dating a guy in Columbia who loved comic books, and I liked the character Storm from X-Men. She had a Mohawk and I thought she was so cool. I also loved the Mad Max movies, and there were in a lot of Mohawks in them.”

How did Moolah feel about her young prodigy making such a bold stylistic statement in the form of the new hairstyle? “Moolah was not happy about it. She mostly wanted her girls to be thin and pretty, with long hair you could pull.”

Eventually, Moolah came around, and Mjoseth finally set foot in the ring to work an actual match in the then-WWF, with Moolah by her side as her manager. The WWF had plans for the Mad Maxine character, including a featured role on Hulk Hogan’s Rock ‘n’ Wrestling Cartoon that ran on Saturday mornings from 1985 to 1987. “They [The WWF] had mock-ups of the cartoon character that would represent me, but Moolah never told me about it. Someone told me later.” Yet somehow, Moolah ended up with the role on the cartoon show. There is truth to Mjoseth’s account, as the WWE website features concept sketches for a character called “Mad Maxine Ryder.” [See WWE.com for concept sketches from the show.]

“Moolah was taking at least half of what I was earning,” Mjoseth said, and so she, along with fellow trainees Luna Vachon and Peggy Lee Leather, decided to venture off on their own to Florida, where Wahoo McDaniel was booking. For all of the bad memories of Moolah, Mjoseth has only fond reminiscences of the treatment she received from the legendary NFL star and pro wrestler McDaniel.

“Wahoo was the booker for Mike Graham, and Wahoo treated me great. We trainees really hadn’t learned much about what to do in the ring. Wahoo walked me through what to do. He was my mentor. Wrestling is very paternalistic, and guys didn’t have much interest in women wrestlers, and viewed them as gimmicks, not athletes.” Mjoseth also had a positive relationship with Gordon Solie, who she describes as “an amazing person and a real gentleman.” 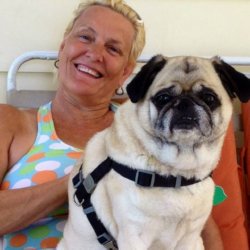 A recent photo of Jeannine Mjoseth.

Writing a book about her experiences in pro wrestling was challenging because, as Mjoseth observed, “Kayfabe is like brainwashing. I didn’t want to betray the other wrestlers. I felt uncomfortable talking about it for a long time. I’ve been working on the book for five years and I didn’t feel it would be hurting any of my friends.”

“I wasn’t in wrestling for very long,” the 55-year-old Mjoseth noted. “At a certain point it was too hot and I had to get out. Plus, I wasn’t a one-night stand type person and got lonely on the road. I really admire the women who are tough enough to stick it out.”

What started out as an adventure she intended to chronicle as a journalist became something more meaningful. “Once I got into it, my interest in writing about it fell by the wayside and I just got into wrestling.” Friendships made in the ring and on the road have endured as well. “I’m in touch with Susan Green, Leilani Kai, Joyce Grable, Princess Victoria, the hardcore lady wrestlers from the ’80s.”

But that was a long time ago. Now, as the Acting Chief of Communications for the National Human Genome Research Institute, Jeannine Mjoseth is in her element. “I had a used microscope when I was a kid and just loved looking at stuff. I think it’s what made me love science,” she said. In addition to her current position, she spent seven years at the National Institute of Aging, where she provided media outreach for efforts designed to get older people exercising and to improve the quality of care for older people.