CHARLOTTE — As the Mid-Atlantic Wrestling Legends fan fest wrapped up a 10-year run, it was only fitting that one of wrestling’s most important partnerships closed the curtain.

J.J. Dillon, Tully Blanchard and Arn Anderson, called the heart of the Four Horsemen, were inducted into the fan fest’s Hall of Heroes Friday.

Though all three are members of various wrestling halls of fame, they said the thrill of being recognized in the region central to their development was without equal. 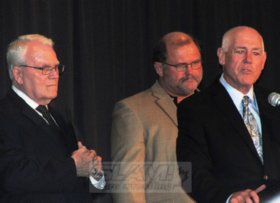 JJ Dillon, Arn Anderson and Tully Blanchard at the Hall of Heroes dinner in Charlotte on Friday. Photo by Steve Johnson

“I want you to know, from the bottom of my heart, this is a goosebump moment for me,” said Dillon, who started as a full-time professional in 1971 in Jim Crockett’s Mid-Atlantic territory and returned as the brains behind the Horsemen more than a decade later.

“I had the good fortune of having my career go full circle,” he said.

Blanchard, a former U.S. champion and tag team champ with Anderson, sounded a similar theme, saying, “Walking to the ring with these two guys on a nightly basis were goosebump moments every night.”

The Hall of Heroes banquet was the highlight of the second of four days at promoter Greg Price’s fan fest, which kicked off in 2004 and is considered the standard for old-school wrestling-themed events.

Blanchard said he seemed to be in photo shoots for hours on Friday with only a brief bathroom break, though he and Anderson left Crockett’s company in 1988, ending the most popular version of the Horsemen.

How popular? Actor Gene Hackman, once sitting in the second row at a wrestling show in Philadelphia, went backstage to get his picture snapped with Blanchard and Anderson. “He and I both have copies of it,” Blanchard said as he nodded toward Anderson.

Anderson, who gave the group its name, noted the finality of the evening. “If this truly is the last time we have one of these [fan fests], then this is a special group because you can say, ‘I was there.'”

Shane “Hurricane” Helms, who emceed the event, said time will not diminish diminished the Horsemen’s deeds. “You guys were the paradigm shift in this business. When you got together, this business changed.”

Also present, though not on stage, were Ole Anderson, an original Horseman, and Barry Windham, who stepped in when Lex Luger “outlived his usefulness,” as Dillon said. Ric Flair was not present.

Several other wrestlers and one referee also were cited for their accomplishments during the ceremony at the Hilton Charlotte University Place.

Boris Malenko was inducted posthumously by Bill Eadie, whom he managed as the Masked Superstar in the Mid-Atlantic territory. Malenko also had a big run in the region in the 1960s, and the ring psychologist supreme was at the center of one of the worst riots in Crockett history in Richmond in February 1966.

Accepting the honor was son Jody Simon, who wrestled as Joe Malenko, among other guises, and is now a successful businessman in Florida.

“He was always a heel, but he was always a beloved heel,” Simon said of his dad (real name Larry), who is best known for his Florida feud with Eddie Graham.

He also had the rare ability to transcend reality, Simon said. He recounted an incident when an elderly female fan in Miami Beach got in his father’s face and told him she knew Boris Malenko was really Larry Simon, a Jew from New Jersey.

“My dad gets in the ring and I’m out there watching. Before long, this lady is standing on her feet, saying, ‘Kill that son of a bitch Russian; kill him!'” Simon laughed.

The Poffo family — “Macho Man” Randy Savage, brother Lanny Poffo and father Angelo Poffo — joined the ranks of the hall, with Lanny delivering a touching and humorous talk about his brother.

Ox Baker, the fearsome villain gratefully accepted his induction, as did Gerald Brisco, who remembered that his first push as a wrestler came in the Mid-Atlantic territory.

Long-time NWA referee Tommy Young, a fixture at fan fest events, joked that he was tapped because organizers must have run out of hall candidates. But the popular Young said he was touched by the honor.

“I have said this probably a thousand times and I’ll say it again. It is the referee’s job to make the wrestlers’ job easier. People pay to see them, not us,” he said.