To say that deathmatch wrestling isn’t for everyone applies not only to fans but to wrestlers as well. Wrestling is punishing enough on a body — throw in some barbed wire, broken glass, thumbtacks and other weapons, and that takes a special kind of tough. Or, in the case of Jesse “F’n” Amato, pretty f’n tough.

Amato will be wrestling at this Sunday’s Deathproof Wrestling show at the Rockpile East in Toronto, Ontario. A mainstay of the promotion, he credits the owner/promoter, Warhed (Chad Gowing), with giving him his hardcore moniker. 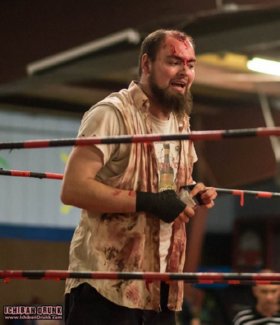 “At the first Deathproof show in Hamilton,” Amato said, “Chad said to me, ‘Just be yourself, kid… be Jesse F***ing Amato.’ So I did, and the rest was history.”

That was Amato’s first match under his hardcore persona, as previously he had been wrestling as a vastly different character: Mercy Jones, a cross-dressing wrestler, wrestling primarily in the short-lived Durham Championship Wrestling promotion.

It was for his Deathproof debut where he decided to change things up.

“Warhed booked me for a deathmatch using fluorescent light tubes and a barbed wire board. Going into it, I didn’t know what to expect — it was pretty heavy stuff to debut in the main event for a start-up company. But I’d known Chad for a few years, and I trusted him, so I took a leap of faith. I got addicted to it, and since then, I’ve gone on to become a cult favourite there. Not bad,” he reflected, “for a guy that Chad originally didn’t think would show up.”

For Amato, not showing up wasn’t an option — being in the ring was a dream that he’s had for most of his 25 years.

“I started watching wrestling when I was two. My grandpa was a huge fan, recording all of the pay-per-views on VHS tapes. He also had tapes of the original ECW, so that’s where my love of hardcore wrestling started.”

“I had a huge love for Mick Foley,” he continued. “His work as Cactus Jack. And for ECW as a whole. I used to download old ECW shows and watched them all. I was drawn to the unique nature that separated it from everything else.

“When I started wrestling — I started training about five years ago — I saw an opportunity to do the same for myself, to set myself apart, even among the amazing talent in Ontario. At the time, the only names around that were associated with deathmatch were Warhed, Bloody Bill Skullion, and the Notorious TID. TID had a big leg injury at the time, and I saw a huge void for the style. Someone needed to step up, so I did.”

Since then, Amato has been making a name for himself as a deathmatch specialist, earning himself spots on some pretty high-profile events. Most recently, he competed in the IWA Mid-South King of the Deathmatches Tournament.

“It was a World Series of Glass Best-of-Seven Light Tube Log Cabin Deathmatch,” he described. (Tremont) is perceived as a top Deathmatch guy in North America, and (I’m proud to say I) went blow-for-blow with him. I started out as a nobody (to that crowd) not ever having worked in the U.S. before. At the beginning, the crowd was 100% behind Tremont. Midway through, they were 50/50, and at the end,” he recalled happily, “I got a standing ovation. (The crowd respected that) I got up after being chokeslamed and frogsplashed through four chairs, two panes of glass, and a light tube log cabin. They even gave me a ‘Please come back’ chant — so I am, next weekend at their Double Death show.”

The reception was simply the icing on the cake, though, as no matter what may have happened, Amato was thrilled to have the chance to work at flagship event of IWA-MS, which was one of his career goals. 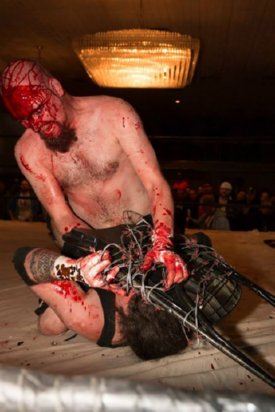 Jesse Amato against Masada at the Hardcore Roadtrip show in London, Ontario. Photo by Tabercil

“It was an honour,” he said about the experience. “Next on the list of goals is to work again for IWA-MS, this time in the Ted Petty Invitational, which is a pure wrestling tournament. I also want to work for CZW and compete in their Tournament of Death. I’d like to (work) in Japan, most likely for Big Japan Pro Wrestling or FREEDOMS, DTU in Mexico is another major (goal). The top bucket list, though, is to work the old ECW Arena — Viking Hall to me is like Madison Square Gardens to most others.”

“And, of course, I’m looking forward to the Deathproof Tournament this Sunday.”

Amato says that this Sunday’s show can act as a good introduction to deathmatch wrestling for those who are uninitiated to the style.

“(These kinds of shows) appeal to and attract people who otherwise hate pro wrestling, who call it stupid or fake. I make those same people say what they saw wasn’t fake, and they begin to ponder the realism of the rest, including the great pure wrestling. To bring a degree of unquestionable realism to the business — how is that a bad thing?”

Detractors of deathmatch wrestling would argue that it is indeed a bad thing, that it’s just mindless violence with no psychology, no art, no regard for safety, and no merit to the business. But Amato dismisses those arguments.

“To me,” he countered, “deathmatch wrestling is more than just breaking (crap) over each other. (Yes), it’s unique, and not a lot of people do it. But in my view, it’s a mindset, it’s a mentality that you’re going out and making sure the fans leave not only believing everything you did, but also feeling like they ripped us off by not paying enough.”

There’s a reason that Bob Kapur’s nickname is “Bloodthirsty.” To learn more, email him at [email protected].