CHARLOTTE, N.C. — Even as wrestlers and fans gathered to celebrate the past at the Mid-Atlantic Wrestling Legends Fan Fest, they cast a wary and acerbic look at the sport’s future.

TNA Wrestling’s business woes were all the buzz at promoter Greg Price’s final fan fest, and occupied much of the discussion at a Thursday night question-and-answer session hosted by Jim Cornette. 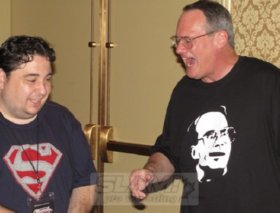 Cornette said he’s concerned that a lot of talented wrestlers could be in the unemployment line if TNA loses its time slot on Spike TV, as reported by TMZ.com. The wrestling company said it is in negotiations with the network, but many in the industry suspect Spike will drop the show.

“I’m not happy that wrestlers are potentially losing their jobs over this,” Cornette said at a fan fest taping of The Jim Cornette Experience, his Internet show available at www.mlw.com. “That’s not what we’re celebrating … [TNA] can’t afford to renew half the talent they’ve got.”

But Cornette, who worked for TNA from 2006 to 2009 as management director, was gleeful that the company gave the axe to Vince Russo, the controversial and often objectionable creative force who had been working secretly as a consultant.

“I think [Russo] had to register as a convicted wrestling offender,” Cornette said. “That’s the thing. He shouldn’t be allowed within 1,000 yards of any school, church, or wrestling arena,”

Mike Johnson of PWInsider.com exposed Russo’s role, when he received a misdirected email from him. Russo, whose TV scripts were once compared by TNA founder Jerry Jarrett to a writer on LSD, had been working on the sly, thanks to a deal with TNA President Dixie Carter.

“It’s just a real shame if this ends up being the downfall of a lot of people’s careers,” Storm said.

Other Cornette Q-and-A guests said that the Russo flap is only the latest in a series of missteps that has called the viability of the company into doubt, such as mimicking WWE storylines by having a Eric Young, an undersized midcarder, as champion.

“I’ve been asked, ‘Can they recharge? Can they restart?’ I don’t think so,” said wrestler-trainer-announcer Les Thatcher. “A lot of good people are going to be out of the street. That wouldn’t include Dixie or Vince.”

Still, Dr. Tom Prichard said a four-day fan fest training camp that he is running with Thatcher, Storm and others for about 50 students, provides some glimmer of hope.

“It’s really cool to see people come and want to learn professional wrestling, as opposed to sports entertainment,” he said.

PWInsider.com’s Johnson, who was present at fan fest, said Thursday he contacted TNA to follow through on the email, which Russo inadvertently sent to him. Russo initially denied he was working for TNA, but later confessed to his secret role.

Cornette praised Johnson during the forum for his journalistic work, saying his investigative skills will enable him to author a book called The Russo Papers, modeled on The Pentagon Papers.

“And then people are going to take those papers and put them under their dog’s ass,” Cornette said.