Caylen Croft brings life to No Beard The Pirate

Many wrestlers have written or been the subject of books detailing their many excesses, whether it was drugs, women, alcohol or a combination of all three. Kris Pavone — a.k.a. Caylen Croft — has written a book that is geared towards a much different audience. He has authored and illustrated a children’s book entitled No Beard The Pirate. 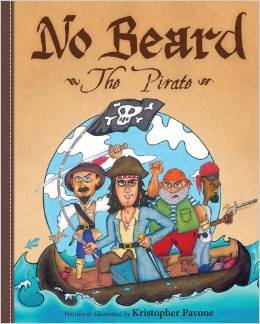 Pavone came to writing and illustrating a children’s book naturally. “Growing up, I had an ability to draw,” said Pavone. “I was always doing illustrations. In university, I even did a Bachelor’s Degree in Fine Arts. Writing a kids book was something that I always wanted to do.”

Considering Pavone’s history of being a professional wrestler for 10 years, it is not surprising that a wrestling connection helped lead to the book being developed and published.

“I had the idea of a pirate who had a magnificent beard. The pirate felt he received all his power from the long-flowing beard. I thought about how the pirate would react if he did not have his beard,” explained Pavone. “Kenny Dykstra was responsible for putting me in touch with my publisher, Mascot Books. Kenny had written a book that was published by Mascot. They wanted a rough outline and really liked what they saw. Soon after that, I got to work on writing and illustrating the entire book which they published.”

Besides the contact provided by former Spirit Squad member Kenny Dykstra, Pavone feels being involved in pro wrestling helped him write a kids book. “To be a good wrestler, you need to be a good storyteller,” said Pavone. “Many guys in wrestling are very creative. For me, writing a book was just one more creative outlet.”

There is a built-in audience for Pavone’s children’s book since he is an elementary school art teacher in Tampa, Florida. He has no regrets post-wrestling.”I was released from the WWE in November 2010. I was fine with that. I had turned 30 and was proud of what I had accomplished in pro wrestling. It felt like it was time to settle down. Thinking about a job, my dad recommended that I make a list of everything that I like and one of them was working with kids. I was lucky to get a job in Tampa as a classroom aide and enjoyed it. In Florida, if you already have a Bachelor’s degree, you can take an accelerated course at community college to get your education certificate. I sent out resumes and was lucky enough to be hired as an elementary school art teacher in Tampa.” 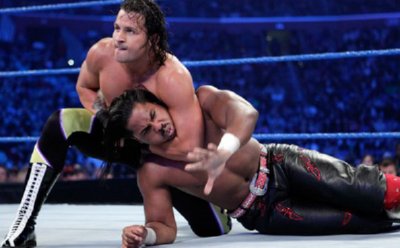 Caylen Croft holds down JTG when he was in WWE. Photo courtesy WWE.

Pavone likens some aspects of wrestling with teaching. “Teaching a class is very similar to a wrestling match. You have to hook the students or audience early. In many ways, a teacher is also an entertainer.”

There are no plans for Caylen Croft’s return to the ring. “Sometimes Trent Barretta talks about reforming the Dude Busters to do some indy dates. That might be fun but I am not in ring shape.”

Writing and illustrating more kids books may be in Pavone’s future. “I really enjoyed the process of doing No Beard The Pirate. I would like to see where it leads and perhaps develop a secondary career.”

You can purchase the book by visiting on Amazon, www.mascotbooks.com or by running into Pavone on the street — “I was so excited publishing a book, I always keep a few copies for sale in the trunk of my car!”