Beth Phoenix popularized the term “glamazon” in wrestling circles, but a new glamazon is garnering attention in the western provinces. 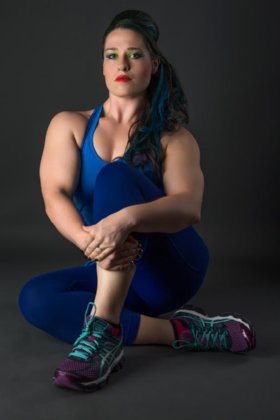 Kat Von Heez is a former body builder, Jiu Jitsu champion, amateur wrestler, and track and field star (in shot put and discus). At 5-foot-6, and weighing in at a densely-muscled 175 pounds, she cuts an imposing figure in the ring, but she also exudes a sultry femininity. Her dazzling green eyes could make the most devout priest re-think his calling.

Von Heez, a Winnipeg native, started her pro wrestling career in 2011, beginning her training with the Canadian Wrestling Elite Academy, and later furthering her schooling under “Massive Damage” Sean Dunster, Phil LaFon, and Tanya Lavigne in Edmonton. But her path to the squared circle wasn’t easy.

“I was never really blessed with the athletic genes and was an overweight kid,” she said. “I never thought I could look the way I needed (to wrestle) or be the athlete I needed to be to be successful. People were very cruel to me. They said I never had the right look to do something like wrestling.”

Instead, she channeled her energies into singing. She became an accomplished vocalist, and was eventually able to perform with the Winnipeg Symphony Orchestra Chorus, and to perform internationally in Europe.

“I got up to 235 by Grade 11,” she said. “No sports team would take me and very few coaches wanted to help me lose the weight; they wanted athletes who were ready-to-go. One day, I saw a poster for a wrestling club and thought, ‘This is my sport. If there’s one thing I can do, it’s this.'”

Weight was still an issue in a sport based upon weight classifications, but the wrestling coach was impressed with her determination and work ethic. 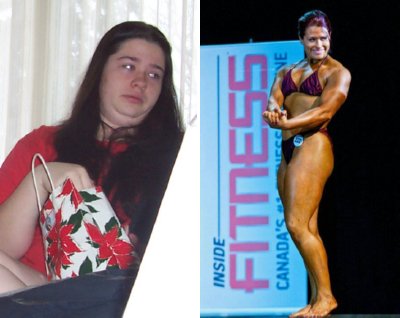 Before and after: high school days and competitive bodybuilding days.

She continued to have issues with weight, eating as little as possible and training anywhere from four to 10 hours per day, eventually dropping 79 pounds. She was diagnosed with Type 2 Bulimia Nervosa (a non-purging eating disorder characterized by excessive exercise).

“My doctor said I was addicted to exercise and afraid to eat because of my past. It scared me, and it shook some sense into me. I began studying fitness, nutrition, and wellness as a whole.”

When it came to rebuilding her body, Von Heez did more than drop body fat and added muscle mass; she actually recovered from three separate vehicular accidents that had the potential of ending her wrestling career — or worse.

One two separate occasions — once while riding a bicycle and once as a pedestrian — she has been struck by mini-vans. The first time she was struck, she and her bicycle were wedged underneath the front of the van, smashing her throat against the bicycle handlebars and injuring her hip. The second collision damaged her rotator cuff. 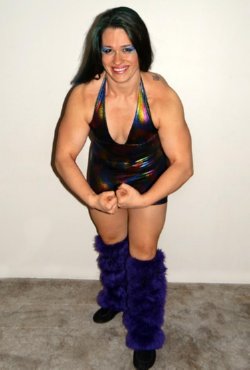 When she moved to Edmonton, she was struck by a semi-truck when she connected with the side mirror while crossing the street.

“You would assume that I’d be screwed up and have plates and screws everywhere, but fortunately that isn’t the case,” she said. “My doctors have said I was extremely lucky that I worked out the way I did to build the muscle. Otherwise, I would have broken everything.”

Sean Dunster, one of her trainers, has nothing but respect for Von Heez’s toughness.

“I have had the opportunity to work with a lot of ladies in the past 10-plus years in my training camps. Very few last very long. Kat is one who has beat the odds,” said Dunster. “I have seen Kat get more than her share of bumps and bruises, and she takes it all in stride. She is a very powerful, tough lady to say the least. Her passion for learning and improving is second to none. Her potential is unlimited, and I see lots for her in the future.”

In December 2013, Von Heez won her first championship, the Pure Power Wrestling cruiserweight title (typically a men’s championship). She experienced the biggest thrill of her career when she teamed with Jim “The Anvil” Neidhart. “We walked out from behind the curtain in front of 1,800 fans, at the historic Stampede Pavilion in Calgary. It was hard not to break character and act like an excited little girl. It felt like all of my dreams were slowly coming true.” 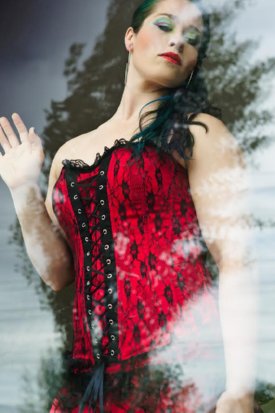 A little Kat can get the heart racing.

Though she usually enjoys a strength advantage against her female opponents, Von Heez isn’t a one-dimensional power wrestler. She moves with fluid grace and smoothly transitions between holds and moves. She has improved a great deal in a short amount of time, and she has the look, athletic background, and wrestling prowess to become a big commodity in the near future.

“My first chance to see Kat in action was against Bambi Hall. I officiated the match and had nothing but praise for the way Kat performed in the ring,” said CNWA official Kevin Jefferies. “Her love for this business and work ethic improves each time she steps in to the ring. She has earned much respect from many of us, along with promoters everywhere she appears. Kat can go a long way with her ability respect and love for this business.”

Von Heez has three Tony Condello Northern Tours under her belt and has wrestled about 200 matches over the past two years. She says her ultimate goal is to win the WWE Divas championship, or to travel internationally and continue to do what she loves. She has another goal that’s equally close to her heart.

“I want to be an athlete that has a story that is inspirational, so that other people who may feel that it’s not worth fighting for a dream realize that they can achieve anything,” she said. “There are no limits. You can make your own destiny. If I can help others along the way, or inspire young kids to get up and chase their dreams, then that is what I want to do most.”