WRESTLE-1’s Yasufumi Nakanoue is currently on his first North American tour, working for Atlantic Grand Prix Wrestling in Canada’s Maritime provinces, and is enjoying it so far.

He was brought to the Maritimes by René Dupre, who works alongside him in WRESTLE-1 in Japan.

It has been a bit of a culture shock, working much smaller venues than say, Tokyo. But a good one, he said. 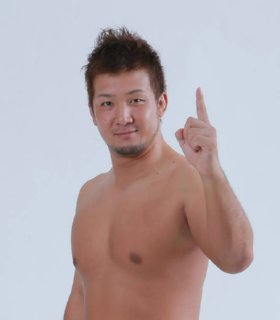 “Coming here to North America is a wonderful experience,” he said through an interpreter. “I love the Maritime crowds.”

It is common knowledge that Japanese fans are different than those in North America,

“The fans in North America are louder and more receptive to the action in the ring,” said Nakanoue. “The kids are very energetic as opposed to Japanese kids who are very quiet.”

Nakanoue has only been wrestling four years, despite his 28 years of age.

Instead, it was baseball that was his sport for nine years — “but pro wrestling was my first love.”

“I wanted to be a wrestler in high school but didn’t know what training to get,” he said, adding that Scott Norton and Don Frye were his favourite gaijin wrestlers. “I did amateur wrestling for three years then trained with Animal Hamaguchi’s Gym. Then I did the All Japan tryout.”

The choice of All Japan was all because of his hero, The Great Muta (“he’s super cool”). So when Muta left All Japan and started WRESTLE-1, Nakanoue switched too.

“All Japan was more traditional,” said Nakanoue. “W-1 is more entertainment based.”

That showmanship is one of the things that he is hoping to improve on during his time with Atlantic Grand Prix.

“I am learning more of an entertainment side of the business here,” he said. “There’s a clear cut difference on good guys and bad guys here so I’m learning quickly about character development.”

Dupre said that Nakanoue is picking it all up quickly: “He’s a great guy with babyface qualities,” said the second-generation star. “He’s already a top seller for merchandise.”

Back in March, Nakanoue worked briefly in TNA, and appeared on the Lockdown pay-per-view, in Miami, where he teamed with Seiya Sanada and The Great Muta to beat Christopher Daniels, Frankie Kazarian and Chris Sabin in a cage match.

Since then, Sanada, who worked the Atlantic Grand Prix tour last summer, has become TNA X-Division champion and has signed a one-year deal with the company. As well, WWE got a lot of press for signing KENTA of the Pro Wrestling NOAH promotion.

To Nakanoue, the biggest challenge facing Japanese wrestlers in North America is easy: “Speaking English is the biggest obstacle.”

He can’t commit to being seen in TNA again, but does believe it’ll happen when WRESTLE-1 is ready.

“I don’t know the specifics, but the relationship with TNA will be ongoing and it’s ultimately the W-1 office’s decision on whether or not I’ll be working there. Personally, I would love to.”