The Destroyer goes over the edge for charity

NIAGARA FALLS, NY – The Destroyer Dick Beyer has done and seen many things in his 84 years on this planet including winning the world wrestling championship. On Friday, July 25th, the Destroyer donned his trade mark white mask with red ribbing and his white wrestling boots to conquer one more obstacle — he rappelled 27 stories down the side of the Niagara Falls’ Seneca Casino to raise money for the Special Olympics of New York. 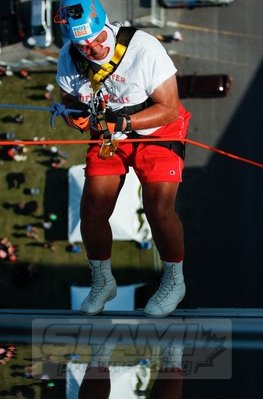 The Destroyer goes over the edge at the Seneca Casino in Niagara Falls, NY. Photo © Craig Wilkins

The event was aptly titled “Over the Top” by the Special Olympics organization and featured local celebrities and people who raised thousands of dollars for the opportunity to rappel down the building. In true Destroyer fashion he took his campaign public and raised over $10,000 for the organization.

The Destroyer was encouraged to participate in the event by his daughter Kris Beyer. “This is my fault,” said Kris Beyer with a smile. “We (Destroyer Park Golf Course) got involved with the Special Olympics and their co-ordinator Amy Neveaux asked if my dad would go over the top. I asked my dad and he said, ‘What do I got to lose?’ and it snowballed from there.”

Former All Japan star and The Destroyer’s son Kurt Beyer joined his father in the wall crawling action. “We are raising money for the Special Olympics that is the reason we are here,” said Kurt Beyer. “How many times do you get to rappel 27 story building with your dad? My dad is wearing his wrestling boots. I told him if we die at least he died with his wrestling boots on.”

Over the past few weeks his daughter, Kris Beyer, has said her father has had many emotions about the thrilling event. “He’s been saying, ‘She got me into it. It’s her fault.’ A couple of days ago he said, ‘She’s pushing me over.'”

Ever the showman, The Destroyer became very animated when discussing the event. When asked if he was worried about rappelling from such a high height The Destroyer chuckled and said “No.” The Destroyer became reflective about his life and the days event. “I have been around the world, had over 8,000 matches and I only worried about a couple of them matches,” said The Destroyer in his deep, booming voice. “No, I’m not worried because they have done this so many times so I don’t think I am going to come to any danger. I hope to have fun doing it. My daughter volunteered me for this.”

Senior director of development for Special Olympics New York Amy Neveaux was very excited about the event. “Over the past five years of hosting this event we have raised half a million dollars,” she said. The Special Olympics uses the funds raised to fully fund their athletes to compete in events, pay for training, coaching, uniforms and anything else they would need to be happy and successful in sport. 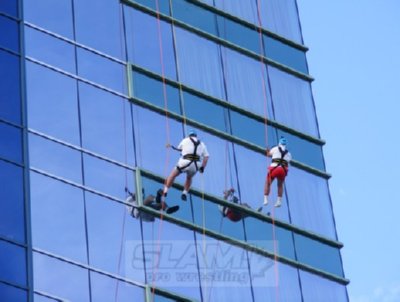 Over the next few hours, I followed The Destroyer from the festive atmosphere of the Special Olympics party area, to the holding and preparation rooms. Never once did he seem worried; rather he seemed eager to start another adventure. He regaled fellow participants and organizers with stories from his wrestling career and put those around him at ease. When it was time for The Destroyer and Kurt Beyer to gear up I was surprised to find out that I would join them at the top of the building — tethered safely away from the edge.

On the roof, the volunteers and the ropes technical crew set to work helping the Beyers learn the basics of rappelling and soon got them into position. One gentleman approached The Destroyer and told him that when he was a child The Destroyer was his hero. Soon enough the former wrestlers headed down the side of the building to cheers from friends, family and supporters of this great cause. The 84-year-old Destroyer successfully completed the tasks he set out to accomplish; raise money for a great cause and to cross another item off of his bucket list.

Once safely at the bottom Kurt Beyer and the Destroyer reflected on their amazing day over a hard-earned beer at the lounge in Casino Niagara.

“Everything is real exciting until you put your heels over the edge at the top and that is when it is like, ‘Oh this is real!'” said Kurt Beyer. “Once you are over that first step it was easy. I would do it again in a heartbeat.”

“When I started out, up at the top, I wasn’t scared because the people who were putting the strap on you were very efficient,” said The Destroyer. “The only time I got a little leery was when one of the ropes got underneath my arm and I got a burn here. I am very glad that I could participate for the Special Olympics. If my appearance here helped the Special Olympics, then I am happy.”

The Destroyer, his family and Destroyer Park Golf certainly have a reason to be happy. The Over the Edge event at the Seneca Casino raised over $100,000 for the amazing athletes of the Special Olympics.

Caleb Smith would like to thank The Destroyer and Kurt Beyer for helping others and being so kind. Also, thank you to Kris Beyer for convincing her dad to do such a neat event and for treating me so well. Another thank you to Derek Gallacher, Canada’s haggis throwing champion (yes it is real), for spending time with us that day and lifting spirits.