The chants ring out in arenas to this day. Whether it be an appearance from former owner Paul Heyman or a brief reminder of hardcore wrestling, wrestling fans en masse will not hesitate to remind you of the sunnier days of the alternative promotion. In 2000, however, the sun was not shining bright in Philadelphia. The little engine that could was running out of steam, falling short on checks and losing a major television deal with TNN.

The latest in the Timeline: The History of ECW series from Kayfabe Commentaries takes a look at the year 2000 through the eyes of Justin Credible. Credible, born PJ Polaco, was about to hit his peak in the promotion, as 2000 would mark his sole reign with the ECW World Heavyweight Championship. 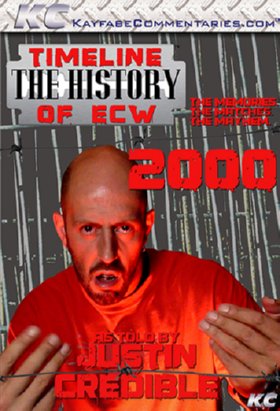 The feature hinges on Polaco as the main storyteller and guide through the year in ECW. As such, Polaco sets the tone and it is one that is very clear: straight-shooting. As opposed to the bombastic personalities often featured in the works of Kayfabe Commentaries, Polaco gives a no-frilled look into the workings of the collapsing company. However, as straightforward as the stories may be, Polaco never fails to keep the viewer interested as he delivers the lay of the land through his scope. While not the hyperbolic and crafty storytelling one could be accustomed to in shoot interviews from those in the professional wrestling industry, Polaco’s delivery works for him and lends an air of honesty in the story.

Perhaps a con to the pro of the no-nonsense storytelling style is the less juicy subject matter. The piece acts as a confirmation to what many already know about the end of days in ECW. The bounced checks and blundered TV deals are given validity. The departure of Mike Awesome from the company and the aftermath of the situation is elaborated in more detail. Ultimately, the work does paint a slightly clearer picture of the dying promotion, but nothing particularly groundbreaking is unearthed in the interview.

A bit of a consolation prize is the inclusion of ECW footage, which provides an entertaining touch throughout the piece. Additionally, Polaco drops nuggets of information here and there as himself and host Sean Oliver follow events on a timeline to span the year that make the timeline worth it.

While far from an essential interview chronicling the ins and outs of ECW making its deathbed, Timeline: The History of ECW: 2000 helps to add some color to some of the grey details. However, the honest storytelling from Polaco adds credibility and the bonus of ECW footage helps to captivate to make the work a worthwhile watch.

It may not be Justin Credible, but Timeline: The History of ECW: 2000 is genuine and entertaining enough for the time and the money.