Well before they were “Big Poppa Pump” and “The Dog-Faced Gremlin,” Scott and Rick Steiner were Wolverines, outstanding amateur wrestlers at the University of Michigan during the 1980s. Next July, they will be inducted into the George Tragos/Lou Thesz Professional Wrestling Hall of Fame for their contributions to the sport. 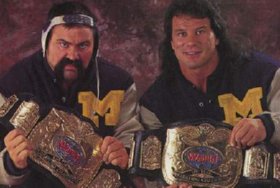 Rick and Scott Steiner in their University of Michigan jackets as World tag team champions.

Robert Rechsteiner — Rick — was a letter winner for the Wolverines in 1981, ’83, and ’84. Scott Rechsteiner was a letter winner in 1982, ’83, ’85 and ’86, and an All-American for the Wolverines in 1986. As pro wrestlers, the Steiners began competing as a tag team in 1989. They amazed at the time with their athleticism and crisp tag team moves. They were successful as tag teams everywhere they went — WCW/NWA, the WWF, and Japan. As singles competitors, they were key figures for many years in WCW, including Scott’s run as WCW World champion.

Also going into the hall is Wilbur Snyder, who wrestled professionally from the early 1950s through the early 1980s. Known as one of the best scientific wrestlers in the ring, Snyder won multiple titles during his distinguished career, and later was a co-promoter with Dick the Bruiser (Dick Afflis) in the promotion based out of Indianapolis, Indiana. Snyder played football for the Los Angeles Rams prior to playing for the Edmonton Eskimos in the Canadian Football League. He died on December 25, 1991.

The Tragos/Thesz Hall of Fame prides itself on its connection to legitimacy. “Criteria for induction into the George Tragos/Lou Thesz Professional Wrestling Hall of Fame include substantial impact on professional wrestling, general respect within the profession, and a strong amateur wrestling background,” reads the press release. “The selection committee includes all living hall of fame members as well as a select group of wrestling historians.”

“This Hall of Fame represents the highest standard in professional wrestling,” said Gerry Brisco, a member of the Tragos/Thesz Hall of Fame and head of the special selection committee, in the release. “This is a special weekend that continues to grow every year. I am proud of this induction class.”

As well, the hall of fame weekend presents special awards for contributions outside of the in-ring action.

Larry Hennig will receive the Lou Thesz Award, which is given to an individual in wrestling who has taken the skills of the profession into the realm of public service. Hennig is a long-time real estate broker in Minnesota and has been involved in countless charities and causes through the years. “The Axe” is already a member of the Tragos/Thesz Hall of Fame, as is his son, “Mr. Perfect” Curt Hennig. WWE star Curtis Axel is Larry’s grandson and the son of the late Curt Hennig.

Diamond Dallas Page will receive the Frank Gotch Award for bringing positive recognition to professional wrestling through work outside the ring. A fitness instructor and an actor, Page created the DDP yoga program, which has led to healthier lifestyles. Page was a popular professional wrestler with WWE, WCW, and TNA. He was a four-time WCW World Heavyweight champion, two-time WCW United States champion, four-time WCW World Tag Team champion, and one-time WCW World Television champion. DDP was originally scheduled to receive the Gotch Award in 2013 but had a scheduling conflict, so the presentation was put off until 2014. “Edge” Adam Copeland received the award instead.

Randy Couture will receive the George Tragos Award, given to an exceptionally competitive wrestler who adapted his wrestling skills and competitive nature to excel in mixed martial arts. Couture was a three-time All-American for Oklahoma State, placing second at the NCAA tournament in 1991 and 1992. He was also a member of four U.S. Greco-Roman World Championships teams. Couture remains one of the most popular competitors in MMA history, ending his career with a 19-11 record.

For excellence in professional wrestling journalism, the Jim Melby Award goes to Larry Matysik. A long-time assistant in the St.Louis office under Sam Muchnick, and later a promoter on his own, Matysik has written five books published by ECW Press: Wrestling at the Chase: The Inside Story of Sam Muchnick and the Legends of Professional Wrestling; Brody: The Triumph and Tragedy of Wrestling’s Rebel, written with Brody’s widow, Barbara Goodish; Drawing Heat the Hard Way: How Wrestling Really Works; The 50 Greatest Professional Wrestlers of All Time: The Definitive Shoot; and the PDF From the Golden Era: The St Louis Wrestling Record Book 1959-1983. He is planning on writing his sixth book in the coming years.