The wrestling referee has a different perspective on what happens in the ring than anyone else. When he does his job right, the storyline being told by the wrestlers moves along and is enhanced; when he errs, everything can go off the rails. 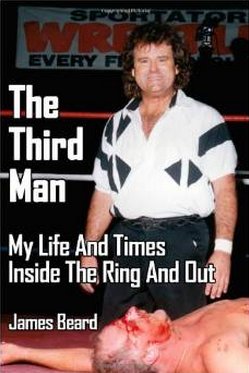 Fortunately, veteran ref James Beard writes like the great referee he was, and his memoir offers fascinating insight into the business and the many characters in it.

His book is titled The Third Man: My Life And Times Inside The Ring And Out, and came out earlier this year. Like most of the wrestling personalities from that era, he’s become a trusted source, especially for his knowledge of the World Class Championship Wrestling promotion in Dallas, Texas, and long-distance friend through the years, though we’ve never met; He’s written a few columns for the SLAM! Wrestling site, one of which — Refereeing 101: A refresher course — was almost the genesis of the book in some ways.

For those unfamiliar with James Beard, he was a referee in Texas from the 1980s until recently; he is currently involved with some indy promotions in Texas and the rejuvenated National Wrestling Alliance.

He got to experience the heyday of World Class, with the Von Erichs on top of the world and the Fabulous Freebirds as their villainous foes. Beard also got to work with a young “Stone Cold” Steve Austin and continues to this day to be a great friend of current WWE colour commentator and former champion JBL.

Throughout The Third Man, Beard offers tremendous insight into the characters he came across, from icons like Austin, Dick Murdoch, and the Freebirds and Von Erichs, to lesser known names such as Rod Price, “Cowboy” Johnny Mantell, Frogman Leblanc and Mike Reed.

It’s the names like Price that I enjoy reading about, and Beard’s take on why Price didn’t become a bigger name in the wrestling business is terrific, and the reader finds himself shaking his head at what could have been.

Additionally, Beard’s insight into the twisted life of “Gentleman” Chris Adams as we’ll ever see; he was with him through good and bad, and his tale of Adams’ demise is a sad reminder to all about the price of fleeting glory.While not a character in and of itself, Beard’s take on the Dallas Sportatorium, the demolished home of World Class, was so clear and precise that you can virtually smell the sweat and hear the cheers.

“There’s not a Friday that I don’t think, at some point, about the Sportatorium,” confesses Beard. “If you called that old place your home as someone within the business or as a fan, it was always a special experience to go there and be a part of all the history that took place in that arena.”

After the territories faded from the wrestling scene, Beard continued to work and saw what he calls “The Lost Generation” struggle to learn the business with fewer places to work.

“There truly is a lost generation of wrestlers who deserve to be mentioned and known,” writes Beard. “But, because of timing, bad luck, politics or simply not being what one of those companies were looking for, they never got a chance to fully develop and display their skills and talents on a big stage.”

As for Beard himself, he writes about his tryout with WWE well after his full-time refereeing days were day, arranged in part by JBL. He truly experiences how the business changed from the days of kayfabe, where secrets were kept from fans, to today’s Internet-based world where revealing the wrong thoughts at the wrong time can nip something with potential in the bud.

Like former WWE referee Jim Korderas’ excellent book, The Three Count, Beard also explains the role of the wrestling referee, and lays out the do’s and don’ts, and how matches are put together, yesterday and today. From that perspective, any referee on the indy scene today should have copies of both books.Beard also worked in Japan a ton, a rarity for an American referee, and helped talent from North America get booked there — unfortunately this aspect of his career is almost completely absent from this book. So in many ways, it’s not an autobiography as there is very little on Beard himself as a person, his family and his life and loves away from wrestling, but instead a memoir of his days as a referee in North America.

The Third Man is published by Mark James, who also worked with Dutch Mantell (a.k.a. Zeb Colter in WWE), Bill Dundee and Jerry Jarrett on their books. The self-publishing empire that James has set up is great for wrestling fans, but the result can often be a little frustrating for a guy like me who has both laid out and edited books, as well as writing them. There are some structural issues, and it certainly could have been tightened up with stronger editing. The photos are decent, but the decision to put them after the chapter struck me as strange too.

Chances are, Beard will be doing a second book anyway. On more than one occasion, he teases, “a long story for another time,” both frustrating and enticing readers.If we’re rating this based on a referee scale, it’s not quite a three count, but a pretty damn entertaining 2-1/2 count.