All-Star bringing out of the Vancouver legends

The fairgrounds date to 1938, and the building not long after. Seating 750 or so for wrestling, it has always been a regular stop for professional wrestling in Surrey, B.C., southeast of Vancouver.

All-Star promoters Mark Vellios, who wrestles as Michelle Starr, and Nathan Burke, who is Disco Fury, are also planning on honouring Johnny Canuck (John Collins), who died on July 17th.

Each of the four living honourees mean something different to different people, said long-time B.C. referee Gary “The King” Allen.

“I think a big draw that night is them two guys,” Allen said, referring to Dean Ho and Eric Froelich. “It should be a great show. I’m looking forward to it. I’m counting the days until it comes.”

But he has also had a lot of people ask about Rick Davis.

“Dean and them go back 40, 50 years. Well, Rick Davis, Todd, was one of the big babyfaces that All-Star had in the ’80s. There are still people young enough to remember Rick Davis,” said Allen, recalling how the female fans would wait patiently to meet Davis after shows. “Back then, he was a favourite of all the girls.”

There’s something special about the building itself, said Moondog Manson.

“I go out to Cloverdale to wrestle, and it’s just a different type of fanbase. You can just tell all the old wrestling fans are there, and their children are there. It’s just a magical environment,” said Manson. “It’s nice to pay tribute to the men and women who paved the way for independent wrestling here.”

It’s a little like coming home, said Eric Froelich. “The fans were always the best and the building was loud each and every week. I look forward to returning to Cloverdale Fairgrounds for this special evening.”

Dean Ho is pleased to be getting honoured Friday night. “I always had a great time and the fans were over the top.” He thought the phone call from Kevin Jefferies of the promotion was just to catch up.”When he asked me if I would be interested in being honoured on this night I could not say no. The fans at All Star Wrestling, and especially in Cloverdale each and every week, were so wonderful. I have met lots of friends … I just hope I don’t run in to any of my old girlfriends.”

— with files from Kevin Jeffries 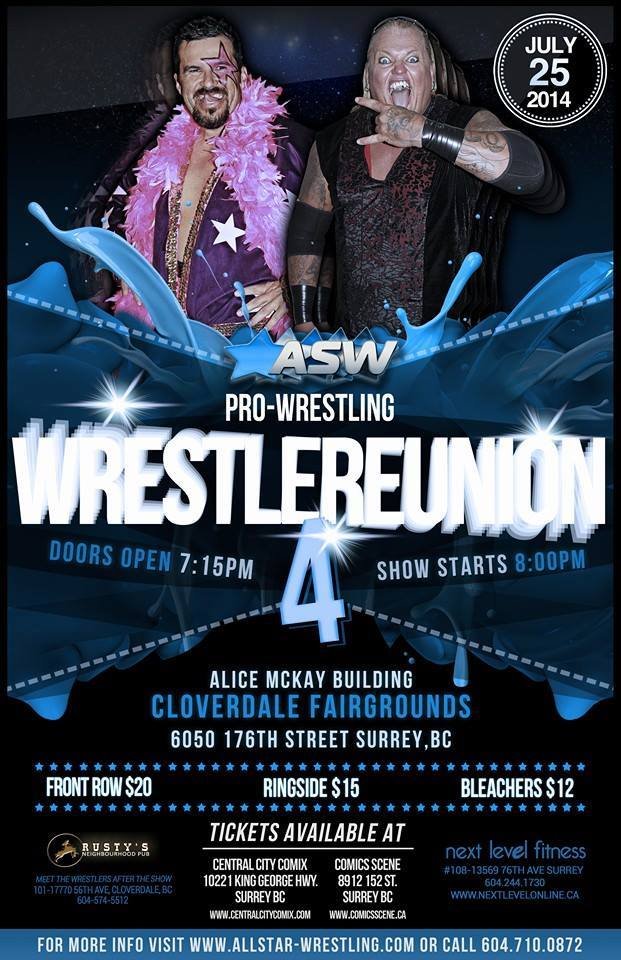 THE CARD @ WRESTLEREUNION 4
Along with the honors that evening, wrestling fans will also be in for some great wrestling action:

Michelle Starr steps back in to the ring to go after the Legends Champion Jason Cage.
The Team of “Cougar Meat” Kyle Sebastian and Collin Cutler will try to win the ASW tag team titles from Bruiser Joe and The Mighty Iton.
Former WWE Wrestler Vampire Warrior Gangrel defends the Trans Canada Championship against Randy Tyler
Tickets are $20 first row ringside, $15 Rows 2-4, Bleachers $12, and are available at allstar-wrestling.com or Central City Comix on King George Hwy in Surrey BC and Comics Scene, 152nd St Surrey BC.