John Cena has once again beaten the odds.

Although outnumbered in a Fatal Four Way match against Randy Orton, Kane and Roman Reigns, Cena capitalized on his opponents’ mistakes to retain the WWE World Heavyweight Title at Battleground. Reigns, the other fan favourite going into the pay-per-view from Tampa Bay, Florida, saw the coveted title agonizingly slip through his grasp.

Despite the discord we saw in their promo earlier on in the evening, Kane and Randy Orton worked as a team. Acting as Orton’s bodyguard of sorts, Kane defended him at every turn, shielding his attempted pin falls as best he could. 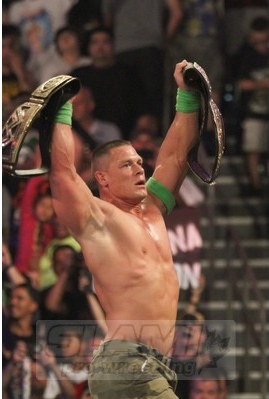 The Authority faves established their dominance at the opening bell double-teaming both Reigns and Cena. With Cena banished to the arena floor, Reigns was double-suplexed by Orton, Kane. As Orton went for the premature cover, Kane made sure Cena didn’t interfere.

Cena traded places with Reigns and became Kane and Orton’s target. Just as Reigns and Cena were about to face-off, Orton and Kane would break things up as they would most of the match.

Things went South for The Authority when Kane dared to attempt a pin on Reigns.

“You are supposed to watch MY back,” snarled Orton as he and Kane got into a bitter shoving match which ended with Kane socking Orton in the mouth.

Roman Reigns big moment in the match came when he gave Cena the Superman Punch and a Spear but his pin fall was broken up by Kane. Undeterred, Reigns followed up with a Superman Punch on Kane, knocking him down and out. Reigns put Cena down before heading outside the ring to Spear Orton through a barricade.

“This is awesome,” cheered the fans in attendance.

We interrupt your regularly scheduled report for an editorial moment.

The “awesome” chant has been cheered so often in recent years, it has really lost all meaning. For a four way, this match ain’t half bad but it sure ain’t Flair versus Steamboat, Hart versus Michaels, Pillman versus Lyger or Van Dam versus Lynn kind of “awesome”. Not even close. Let’s move that bar back up and reserve that chant for truly epic encounters, shall we?

We now return to your regularly scheduled report.

As we near our finish, Kane is the last man standing. He signals that this is indeed the end. It seems Kane was a little optimistic as he misses his Tombstone Piledriver on Reigns. Kane gets Speared but Orton makes the save and RKOs Roman. As the dust settles, Cena regains consciousness just in time to give the AA on Orton and on a prone Kane for the three count.

As Cena celebrates having defied the odds, Reigns looks on the from the arena floor knowing his time will come.