DEARBORN, Mich. — As Kevin Steen and Steve Corino tightly embraced in the middle of a streamer-filled ring, you could only imagine what words were being whispered back-and-forth just moments after Steen capped an illustrious Ring of Honor career by beating Corino, his long-time mentor. 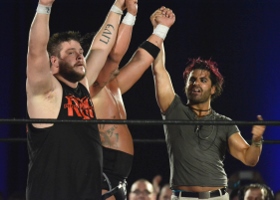 Kevin Steen says goodbye to Ring of Honor, along with Steve Corino and Jimmy Jacobs. Photo by Brad McFarlin

Inside the jam-packed Ford Community and Performing Arts Center, it was an emotional night as both Ring of Honor and its fans said goodbye to Mr. Wrestling.

All night, even through some great bouts taped for ROH’s television program, you could tell the standing room-only crowd of more than 800 fans were there to see one thing: Steen’s final ROH match.

After nearly four hours, it came.

Both Corino and Steen made their entrances, Steen’s to an incredible amount of streamers (allowing the former ROH World Champion to get under all of them and rise up as a streamer monster), Corino made sure to hand ring announcer Bobby Cruise a card with a special introduction.

In an intro that include Cruise pulling an alcohol shooter out of his suit jacket and downing it, it talked about all the ROH stars who moved on, including Samoa Joe, El Generico, Claudio Castagnoli, and CM Punk, among others, always carried the ROH spirit with them no matter where they went.

The two shook hands to start the match, adhering to the Code of Honor. Well, until Corino sucker punched Steen and it was on from there.

With loud “Mr. Wrestling” chants filled the venue, Steen and Corino started the match with a scene straight out of the famous PRIDE Fighting Championships mixed martial arts fight between Don Frye and Yoshihiro Takayama.

Naturally, with a start like that, the two brawled to the floor. In one of those moments you’ll never forget as a wrestling fan, Steen spotted a fan in the second row wearing the mask of his long-time partner/rival El Generico. The fan gladly handed the mask over to Steen, who put it on and beat the tar out of Corino with the fans filling the arena with the familiar chants of “ole, ole, ole!”

With both men pulling out all the stops, it was Steen who was finally able to gain the definitive upper-hand, as he stopped Corino and hit the Package Piledriver. Referee Todd Sinclair’s hand hit the canvas three times, giving Steen the win in his final Ring of Honor match.

After the match, Steen helped Corino to his feet, where the two held a long, emotional hug. Jimmy Jacobs came out of the locker room joined the hug to loud ovations. Only, it was a ruse, as members of The Decade hit the ring and attacked Steen. Steen, with the help of several in the locker room, including Christopher Daniels and Frankie Kazarian, fought them off.

At this point, most of the ROH locker room hit the ring with silly string, balloons, party hats, champagne and even some gifts, including a John Cena action figure.

With the crowd on its feet, Steen thanked former ROH owner Cary Silkin for what he’s done, and shared a story of how Daniels took the time 10 years ago to help Steen mature in the business when they met at a show in Quebec City, noting it was something not a lot of others would’ve done.

He also thanked Mark and Jay Briscoe and Nigel McGuinness before thanking Corino for many things, but specifically for teaching him how to be a good father while being a wrestler.

Steen talked about how hard the crew works and how their work often goes under appreciated, while also thanking Sinclair Broadcasting for what it has done for ROH.

“I’m going home, but I’m also leaving home because that’s what (ROH has) been for me for so many years,” Steen said.

The roster burst open some bottles of champagne and toasted Steen in the middle of the ring, as the Marieville, Quebec native is off to a new adventure.

NOTES FROM THE SHOW

Because it was a Ring of Honor TV taping, it is our policy to not give away the results. Here’s the matches that happened Saturday night in Dearborn, Mich.: